If you had millions of dollars at your disposal, what luxuries would be on the top of your list? A mansion surrounded by a large plot of land? A fleet of sports cars? Perhaps a wardrobe filled with the most “fashion forward” accessories, clothes and shoes? None of those options have ever been all that appealing to me. But I’ll admit to one extravagance that would be most welcome – having a weekly massage. When Mrs. Healthy Fellow and I go on vacation we often fit in at least one afternoon at full service spa. There we indulge in some type of bodywork, be it an aromatherapy or hot stone massage, a facial or a session of reflexology. Sure it’s pricey but you leave feeling great and with the knowledge that you’ve invested in something health promoting for the body and mind. That’s why my Healthy Monday tip of the week is to give others and yourself the gift of massage. 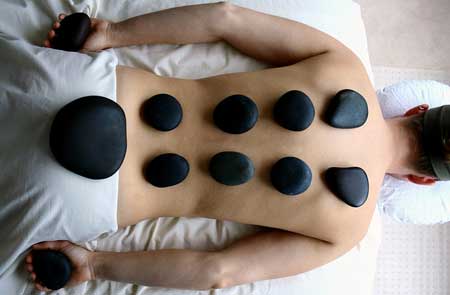 The August edition of the Journal of Holistic Nursing provides a historical perspective of massage therapy in nursing care. In the 1800’s, massage instruction and training was a standard part of nursing curricula. But with the advent and adoption of more specialized physiotherapy and pharmacological options, massage rapidly lost ground in the field of the healing arts. The closing line of the review article states, “Historical research in the use of massage in nursing may help refocus attention on the healing of the mind/body and reinforce the value of compassionate touch and balance in nursing practice today”. Here are 10 reasons why I think modern medicine would benefit if this came to pass: (1)

As much as I endorse and enjoy massage, I fully understand that it’s not appropriate in every circumstance. If you have or suspect that you have a serious health condition, please consult with a trusted health care provider prior to engaging in a course of massage therapy. Also, please keep in mind that there are literally hundreds of variations of massage. Consulting with a specialist can help you find the right application for your individual needs. I’d also urge you not to let financial obstacles rule out massage from your life. Basic massage techniques can be applied by lay people, provided they have a good guide to help along the way. There are often low cost classes available at community centers and hospitals. In addition, there are countless books by experts in the field waiting for attention at your local library. Learning how to use your hands as healing tools is a great gift you can give yourself and others.