Today I’m pleased to present the finale of my interview with Dr. Richard Feinman, editor-in-chief of the medical journal Nutrition and Metabolism. Regular readers of this site know that it’s unprecedented for me to devote so much time to a solitary figure in the scientific community. Here’s the reason why. There are certain nutritional strategies that are considered illegitimate and/or politically incorrect. Carbohydrate restriction is sometimes lumped into this pejorative category. There are a whole host of misconceptions and prejudicial characterizations assigned to those who engage in such a lifestyle and the researchers who investigate the health effects of doing so. I believe that a large portion of the misgivings about such menu plans result from a lack of evidence-based data. If my theory is correct, then one of the most effective remedies for dispelling such myths is to confront them with the most articulate and reliable authorities in the field of carbohydrate restriction research. It’s hard to imagine a better advocate or representative than Dr. Feinman. 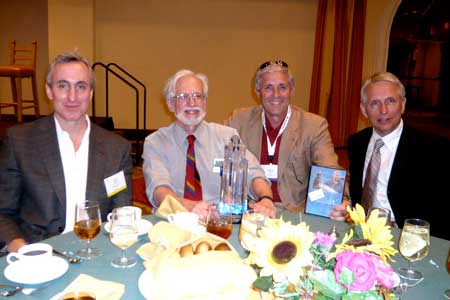 JP – You’ve authored several studies that have investigated the effects of low carbohydrate nutrition in those with metabolic syndrome and type 2 diabetes. In that research, how did the carb restricted diets fare in comparison to the more conventional low-fat diets?

Dr. Feinman – Carb-restricted diets almost always do better than low-fat diets, especially for type 2 diabetes. In some sense, everybody knows this. It is after all a disease of carbohydrate intolerance. It is mostly politics that keeps this from being admitted out loud. The recent publication by Gannon and Nuttal in Nutrition & Metabolism is really a knock-out (available at http://www.nutritionandmetabolism.com/content/pdf/1743-7075-7-64.pdf without subscription). Their research shows the improvement in glycemic control even on a moderately low carbohydrate diet. The work is of great importance because it shows the benefit of carbohydrate restriction under conditions where weight was maintained at baseline conditions. This means that it was not the weight loss but the reduction in carbohydrate that provided benefit. That health agencies are still recommending low fat diets for people with diabetes is a scandal equal to any in the history of medicine. Dr. Eric Westman put it this way: (http://www.nutritionandmetabolism.com/content/pdf/1743-7075-5-36.pdf)

“At the end of our clinic day, we go home thinking, ‘The clinical improvements are so large and obvious, why don’t other doctors understand?’ Carbohydrate-restriction is easily grasped by patients: because carbohydrates in the diet raise the blood glucose, and as diabetes is defined by high blood glucose, it makes sense to lower the carbohydrate in the diet. By reducing the carbohydrate in the diet, we have been able to taper patients off as much as 150 units of insulin per day [very high level] in 8 days, with marked improvement in glycemic control-even normalization of glycemic parameters.”

The only saving grace is that many doctors do understand or are at least open to the idea. Most physicians are interested in helping their patients. Somehow the press can always find some physician who will give the wrong impression.

JP – I’m sometimes asked whether low carbohydrate diets can halt the progression of cardiovascular disease or, possibly, even reverse it. The genesis of these inquiries tends to focus on the research from the 80’s and 90’s conducted by Dr. Dean Ornish and Dr. Caldwell Esselstyn. Can you please explain your thoughts on this?

Dr. Feinman – Ornish’s research is most often not considered by researchers as an established method due to the extreme nature of the dietary restrictions involved. As I recall, they changed many factors including smoking and exercise as well as a required stress management training program. For whatever reason, it has never been repeated, probably because the establishment doesn’t like anything extreme even if it is along the lines of low fat. I don’t know Esselstyn’s work so I cannot comment on that. There may be nothing obviously wrong with these diets if they work for you and you like very low fat. They are ascetic by my standards but many people like the lean and hungry feeling. They don’t, however, constitute any kind of established standard for reduction in cardiovascular disease.

JP – You’ve devoted a number of scientific publications to the concept of a low carbohydrate “metabolic advantage”. What does this mean in practical terms?

Dr. Feinman – It means you may lose more weight calorie-for-calorie on a low carbohydrate diet than on a similar low-fat diet. It’s hard to prove absolutely, especially since low carbohydrate diets tend to be more satiating and so people also eat less. There is strong objection to the idea, sometimes on the mistaken notion that it would somehow violate the laws of thermodynamics. That’s actually how I got into this field. Thermodynamics is a very sophisticated mathematical subject. My colleagues and I, because we have actually studied the subject, tried to explain how chemical thermodynamics applies to diet. The conclusion is that thermodynamics and the relevant biochemistry predicts metabolic advantage. We are working right now to write an exposition that’s easier to understand.

JP – How do your colleagues typically react to your nutritional philosophy? Is the climate changing for the better or worse with respect to the perceived legitimacy of carbohydrate restricted diets?

Dr. Feinman – I regret that I didn’t keep track of all the physicians who have told me that they lost a lot of weight on the Atkins diet and don’t have any problem with it. The people at the medical school where I work understand the value of carbohydrate restriction, but nutrition is not a big part of modern medicine which is so heavily drug-oriented. Many physicians simply send the patient to a dietitian who is likely to be absolutely inflexible (they may be constrained by the dietetic organizations). That is where the real resistance is and I think it will take another generation for that to change.

JP – Lately, several studies have investigated the effects of slightly modified versions of low-carb diets – the “Eco-Atkins” diet (a vegan menu), an LC Mediterranean diet and a “Paleolithic Diet” which tends to focus on lean meats, nuts, seeds, fruits and vegetables, but no dairy. What’s your opinion about these alternative versions of low carb nutrition?

Dr. Feinman – The fundamental principles are more important than what you call your diet. As one example, a fruit is not nutritionally the same as a vegetable. Any diet that lumps them together is hard to take seriously. Eco-Atkins was clearly more politically than scientifically motivated. The Paleolithic diet and Mediterranean diets have good features insofar as they conform to the biochemistry but they are based on the Garden of Eden principle, that there was some ideal diet that we once had before they started putting high fructose corn syrup in our food supply. We did not evolve for a particular environment. The selective pressure was for adaptability.

JP – What types of studies would you like to see conducted on low carbohydrate diets in the future? What resources would it take to make your dream trials a reality?

Dr. Feinman – We would get very far if we could honestly face the work that has already been done on both low carbohydrate and low fat diets. That would not take great resources but a change in mental attitude. After that, we could conduct the studies that Jeff Volek, Eric Westman and I have submitted to federal and private agencies that have not been funded. The resources we asked for were generally small compared to some that have been funded.

JP – If someone is considering adopting a low carbohydrate diet, what would you suggest they do prior to starting? Which books, periodicals or websites would be most helpful for beginners?

Dr. Feinman – The first place I point people to is the Nutrition & Metabolism Society’s website (www.nmsociety.org). There they will find an abundance of resources including research, informative popular articles and links to many other informative sites. There are now so many books and sites that cover a pretty broad range in style and orientation. The New Atkins book is a good resource although I would begin with Chapter 13 and Chapter 14 and then Chapter 5 which is where the science is. The rest is good if you like “a diet” rather than just general principles. A good short intro is in Judy Barnes Baker’s Carb Wars which is one of the best cookbooks. The best overall introduction is Mike and Mary Dan Eades’s Protein Power Lifeplan. There are numerous good websites: Laura Dolson’s About.com site is very comprehensive and Jimmy Moore’s site is always informative. Mike Eades’s site is great — very knowledgeable on the science and sometimes really over the top. Along which lines, Hannah Sutter’s Big Fat Lies is unrestrained but hits home. Important is support that you can get from on-line groups; the largest is the Active Low-carber Forums. You’ll find information on all of these and many more at the NMS website so it’s a good idea to start there.

I’d like to take this opportunity to sincerely thank Dr. Richard Feinman for sharing his breadth of knowledge and valuable time with us. My sincerest appreciation also goes out to Laurie Cagnassola, the Director of the Nutrition & Metabolism Society. She was pivotal in making this entire Q&A process possible. I hope that the information shared in this three-part series has helped to clarify some of the stubborn facts that have encouraged myself, my wife and millions of others to adopt a carbohydrate restricted diet. Please note that the goal has never been to convert those who consciously select a different type of dietary regimen, but rather to present an honest account of one option that ought to be considered but often is not.