Staying physical active is one of the greatest gifts you can give yourself. But there are numerous reasons why some people avoid exercise altogether. Chief among them is a lack of conviction. At times this is a result of over-rationalization. “I just saw on the news that so-and-so died. He was an avid runner. That just goes to show you that we’re all going to die anyway.” Another common excuse is the belief that exercise has to be complicated. Spend some time at a book store or watching infomercials late at night and you may get the impression that you need to buy a best-selling training manual, a trendy DVD or take a specialized course in order to “do it right”. The truth is that for the vast majority of people, getting healthier is as simple as moving around more. However, it never hurts to peer into the scientific literature from time-to-time to see what’s new in the world of exercise research. That’s where the real advancements are presented. My Healthy Monday tip of the week is to stay active while staying informed to get the most out of your work-out routine. 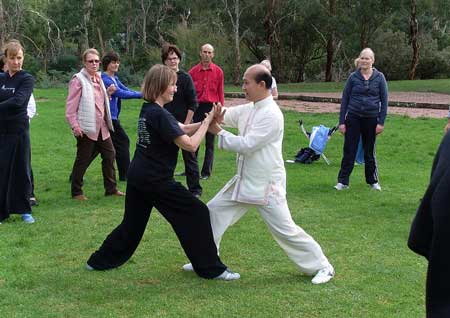 There’s nothing wrong with a vigorous work out. In fact, there can be a lot to be gained from testing your physical limits. That said, gentler, more deliberate exercises that include mind-body techniques can similarly improve physical conditioning and shape. Two new studies clearly illustrate this assertion. The first is published in the August 2010 edition of the British Journal of Sports Medicine. A 12 week intervention combining Tai Chi and Qigong exercise training improved several indicators of metabolic syndrome and overall quality of life scores in a group of 11 men and women with ages ranging from 42 to 65. Specifically, a reduction in blood pressure, body mass index (BMI), HbA1c (a measure of long term blood sugar control), insulin resistance and waist circumference was reported. On the mental front, there was also a decline in depressive symptoms and stress. Greater “general health”, “mental health” and “vitality” also showed a positive shift. In addition, the Australian authors conducting the research note that voluntary adherence to the experimental protocol and “treatment acceptance” was high. (1)

The evidence from the above mentioned study is very positive and in accord with the results one might expect from an aerobic style exercise regimen. However, there appears to be some differences in treatment outcomes when “Western exercise” is compared head-to-head with Eastern practices such as Tai Chi. In July 2010, a trial was published in the Journal of Aging and Physical Activity. It examined the relative effects of Tai Chi, “Western exercise” (WE) and “an attention-control group”. The study participants had an average age of 69 and engaged in a combination of classroom and home-based exercises over a 12 month period. The results show distinct advantages for each of the two interventions. Those involved in the WE program demonstrated greater gains in upper body flexibility. But the volunteers in the Tai Chi group exhibited statistically higher scores in measures of balance and cognitive function. This suggests that a combination of various styles of physical activity may afford more comprehensive health benefits than singular forms. (2,3)

Many asthmatic children do not exercise enough because of the frequently faulty assumption that physical activity could make asthma worse. This is a shame because in many cases increased activity actually leads to gains in lung function and health-related quality of life. Recent studies conducted in Australia, Brazil and China all support this point of view. Specifically, the findings indicate that aerobic training can diminish frequency of asthmatic symptoms, physical limitations and the psychosocial consequences of asthma. The number of asthma-free days tends to increase when regular exercise takes place and feelings of anxiety and depression decline. One of the theories about how exercise accomplishes this feat is via anti-inflammatory activity. It’s important to note that adult asthmatics also benefit from supervised exercise interventions. (4,5,6,7,8)

The August 2010 issue of the European Journal of Applied Physiology may surprise some exercise enthusiasts who believe that high carbohydrate intake is required to fuel the body during and after work outs. A cross-over study involving 12 men and women tested the impact of high and low carbohydrate (CHO) nutrition during separate courses of 6 sets of eccentric exercises. When given the high carbohydrate nutrition, greater “perceived soreness” was reported. Inflammatory markers known as IL-1beta and IL-6 were higher 24 hours post exercise in the high-carbohydrate vs. the low-carbohydrate testing periods. The authors of the research concluded that, “inflammation induced by high-force eccentric exercise in skeletal muscle is greater when a high CHO compared to a low CHO diet is consumed during recovery”. (9)

According to many mainstream health authorities, there’s no advantage and potential danger when using nutritional supplements to support physical performance. What’s more, any decline in energy, recovery and strength that accompanies aging is to be expected. One should just accept it and move on. Well, to that, I say “Not so fast!”. If you’re not eating a plentiful amount of red meat, you’re unlikely to get much carnitine in your diet. However, non-meat eaters can derive the health benefits of carnitine by supplementing with it as an alternative. Italian researchers recently administered 2 grams/day of l-carnitine l-tartrate to a group of 18 middle-aged men and women in a crossover, double-blind, placebo-controlled experiment. Three weeks of supplementation with carnitine resulted in positive changes in various biochemical markers: free radical formation, muscle soreness, muscle tissue disruption and purine metabolism. The concluding remarks of this Italian study explain that, “These findings support our previous findings of l-carnitine in younger people that such supplementation can reduce chemical damage to tissues after exercise and optimize the processes of muscle tissue repair and remodeling”. (10)

Patients with chronic obstructive pulmonary disease or COPD often feel as though exercise is beyond their reach. Currently, there is no miracle cure that modern medicine can offer. However, a combination of prescribed exercise training and whey protein may provide some functional and psychological benefits. A study appearing in the June 2010 edition of the Journal of Medicinal Food describes a trial involving 22 patients with COPD. Half of the study volunteers were given a placebo (casein/milk protein). The remainder supplemented with whey protein. All of the participants engaged in a 16 week exercise intervention. The Canadian researchers overseeing the trial discovered that the use of whey protein potentiated “the effects of exercise training on exercise tolerance and quality of life in patients with COPD”. This finding may allow for allopathic physicians and pro-active patients to incorporate whey protein as a useful adjunct to conventional COPD care. (11)

I’m strongly in favor of inactive people getting more involved in exercise. But there are a few caveats. It’s always a good idea to check in with your health care provider to determine which form of exercise is right for you. Certain health conditions may require modified exercise regimens or a progressive integration of activity into your lifestyle. If and when you get the go-ahead from your doctor, you’ll need to decide how to begin. There are differing points of view about this. To my mind, it’s generally best to start off slowly and carefully assess how your body tolerates this positive change in behavior. Pay close attention and proceed accordingly. It’s better to take things slowly and maintain a long term program than to push too hard initially and burn out or injure yourself. I hope today’s information will inspire you to adopt an activity level similar to that of prior generations. Please remember that regular physical activity is as natural as drinking pure water, eating whole foods and getting adequate sleep. It’s also as important.