It’s been an unseasonably cool summer in Southern California. But, at long last, a sort of heat wave has finally arrived. As the temperatures rise, the number of ice cream trucks seem to multiply. This was the case when I was growing up and remains true in 2010. Sadly, the selection of frozen treats sold to today’s youth isn’t much healthier than those that populate my memories. Artificial colors, flavors and high fructose corn syrup are still mainstays of many of the best selling popsicles. You can view this as a rather disheartening example of how some things never change or you can do something about it. Why not make your own popsicles at home? 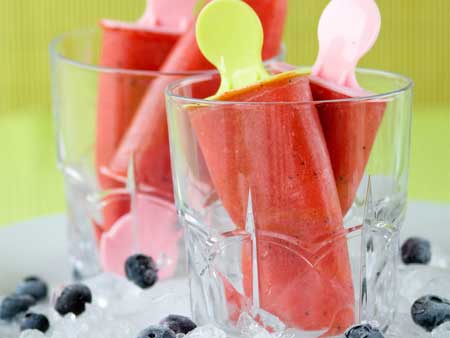 Building a better popsicle is as simple as using more natural ingredients and a little ingenuity. The process entails identifying what you want to eliminate and establishing the nutritional profile you’d like to achieve. For today’s recipe I had a few objectives: 1) get rid of all of the artificial ingredients; 2) create vibrant colors and flavors; 3) drastically reduce the sugar content; 4) incorporate ingredients that may yield health benefits.

I first decided to use organic, wild blueberries and an herbal tea that contains therapeutic ingredients including blueberry leaves and hibiscus. Although blueberries do contain some naturally occurring sugar, they also possess select phytochemicals that may improve various risk factors associated with cardiovascular disease and diabetes such as high blood pressure, insulin resistance and oxidized LDL (“bad”) cholesterol. The addition of the blueberry tea allowed for an extra (natural) boost in flavor without bumping up the carbohydrate count. (1,2,3)

Many adults and children cannot tolerate dairy. Therefore, I opted to use coconut milk instead of cow’s milk. But beyond the issue of food sensitivities and/or lactose intolerance, coconut milk offers some distinct advantages. Three recent studies appearing in peer-reviewed medical journals demonstrate that coconut oil and one of its derivatives (medium chain triglycerides) may: a) “offer strong advantages for protection against oxidative stress in heart mitochondria” (energy production centers in cells); b) improve age-related cognitive dysfunction; c) support weight loss by increasing energy expenditure and fat oxidation, while reducing food intake. (4,5,6)

Some of you may be feeling a little bit uncomfortable with the notion of deliberately adding saturated fat to a recipe. After all, coconut oil is compromised of over 90% saturated fatty acids. But please don’t panic. Instead, I would urge you to consider several recent publications before assuming the worst of this traditional fat source.

13.5 oz can of organic coconut milk

a pinch of NutraSalt or salt

Heat 4 oz of purified water and steep the 6 tea bags for at least 15 minutes. Allow to cool and then press the tea bags to extract every last drop of flavor. Place the frozen berries in a pitcher. Add the organic coconut milk and the brewed tea concentrate, as well as the liquid stevia and a sprinkle of salt. Use an immersion blender to process until completely smooth. Fill six popsicle molds leaving about 1/4 ” on top to allow for the natural expansion that occurs during the freezing process. Freeze for about 4 hours before serving.

There are many flavored teas on the market. I specifically chose the True Blueberry product because it has no herbal aftertaste. The only flavor that comes through is that of berries. The composition of the brew, which is manufactured by Celestial Seasonings, is also commendable: hibiscus flowers, rosehips, orange peel, natural blueberry flavor, blackberrry leaves, wild blueberries and blueberry leaves. In prior columns, I’ve addressed many of the health attributes of blueberry leaves, hibiscus and rosehips. There hasn’t been a great deal of scientific inquiry into the therapeutic potential of blackberry leaves. However, the little research that has been done suggests that they may combat the growth of pathogenic bacteria including H. pylori and provide a good source of dietary antioxidants including catechins and flavonols. As is often the case, it seems that even the neglected portions of plants frequently provide a secret treasure trove of disease fighting components. (12,13,14,15,16)

This recipe was my first foray into the popsicle making arena. So the first thing I had to do was to find a suitable mold for the popsicles. I was pleasantly surprised to discover that some brands proudly proclaim that they are BPA-free. BPA (bisphenol A) is a potentially toxic chemical found in canned foods and plastic goods that may contribute to everything from behavioral problems in children to fertility issues in men and, possibly, an increased risk of certain cancers. To my mind, if you’re going to take the time to make healthier versions of popsicles, I think it’s worth seeking out molds that are in line with this overall philosophy. Now that’s enough with the science. Time for dessert! (17,18,19)