A rather confrontational question was recently posed to me by a guest at a dinner party. The exchange itself was relatively brief so I didn’t get the chance to learn much about the inquisitor. But I suspect that he had at least some training in the conventional medical field. He wondered how in the world I could be supportive of unconventional practices such as acupuncture and guided imagery when there are countless medications that can produce similar effects in a more predictable manner. This “gentleman” went on to list a few of his favorite examples. My response was that many holistic practices tend to encourage the body to augment its own production of biochemicals rather than introducing foreign chemicals to accomplish a comparable end. 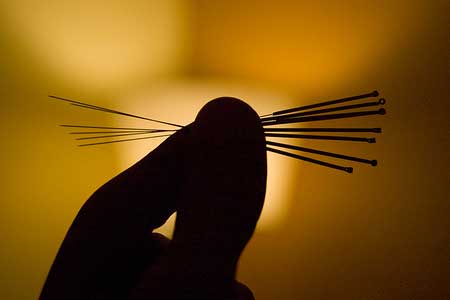 I believe that the eastern concepts that underlie acupuncture will never be fully accepted by western medicine. The two schools of thought are simply too far apart to ever converge. However, something very positive may come about because of this profound difference in philosophy. Specifically, modern science is now investigating why acupuncture appears to possess some degree of therapeutic potential. What they’re learning will almost certainly benefit everyone on the treatment end of an acupuncture needle. (1,2,3,4,5)

Several studies of late provide compelling evidence that acupuncture can be a primary therapy or valuable adjunct for a number of health conditions. I’ve specifically selected controlled trials involving human participants to include in today’s column. This variety of research can play a major role in easing the concerns of many earnest skeptics.

The two remaining studies applied an integrative treatment model. The first, which is presented in the August 2010 issue of the Journal of Affective Disorders, examined the potential of acupuncture as an adjunct to antidepressant treatment in “non-responsive” patients with major depressive disorder. A total of 30 volunteers who did not respond to conventional care were enrolled in the experiment. A depression index referred to as the Hamilton-D 17 scale was used to assess any change in depressive symptoms. The researchers documented an average 47% response rate to the combined therapies. The acupuncture was found to be “safe, well tolerated and effective in antidepressant partial and non-responders, suggesting good feasibility in outpatient settings”. (9)

The final trial aimed to determine whether acupuncture could provide additional pain relief to patients receiving conventional care for endometriosis. A group of 101 women was treated with “verum” (real) or sham acupuncture over a 5 week period. Acupuncture was administered twice weekly during the intervention. After the completion of the research, the women were observed for at least two menstrual cycles. A “10-point visual analogue scale” was employed at baseline and at the completion of each stage of this randomized, crossover study. The volunteers given the real acupuncture “showed a significant reduction in pain intensity”. (10)

As with any form of medical therapy, it’s important to find a reputable source of care. The safety and success of acupuncture rests heavily on the skill of the practitioner applying the needles. What’s more, even the most competent acupuncturists can’t completely rule out the possibility of occasional side effects. A recent review of 3,071 acupuncture treatment sessions found a total of 99 adverse events or 3.2 cases per 100 treatments. The majority was related to mild bleeding and none were deemed “serious adverse events”. The closing remark of the review assures prospective patients and referring physicians that, “If acupuncture treatment is administered by a practitioner with enough experience and is conducted in accordance with established guideline, it is a safe treatment method”. That’s reassuring to know. But it also places the responsibility of finding such a healer squarely in your hands. Please do so carefully if you decide to use acupuncture in your wellness regimen. (11)