Medical news is often classified into three categories. The most common and under-appreciated variety provides corroborative data on already established principles. Example: Exercise does your body and mind good. The second category adds a new twist to pre-existing information. Example: Eating plenty of vegetables reduces the risk of cardiovascular disease and all-cause mortality – especially in the context of a lower carbohydrate diet. The final category turns old concepts upside down. Example: Students have different and distinct learning styles which need to be catered to in order for them to thrive academically. Not necessarily. The details of these news items and more come courtesy of various contributors on Twitter. 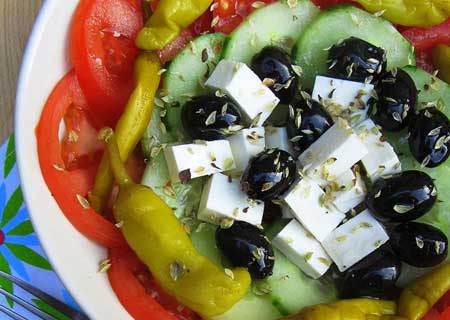 The LATimeshealth Twitter account recently drew my attention to a study that appears in the latest edition of the Annals of Internal Medicine. In it, researchers from the Harvard School of Public Health examined a proposed link between low carbohydrate diets and mortality rates. The population pool involved approximately 130,000 men and women following carbohydrate restricted diets over a 20 + year follow up period. The results indicate that “a higher vegetable low-carbohydrate score was associated with lower all-cause mortality (-20%) and cardiovascular mortality (-23%)”. (1,2)

Based on the previously reported information, some may conclude that a vegetarian form of low carb dieting would be ideal. However, this doesn’t appear to be a necessity. A few recent studies have examined the effects of two different vegetable-rich, carbohydrate restricted diets. One was based on a “paleolithic, hunter-gatherer” model and the other was a vegetarian eating plan.

A recent tweet by WomensHealthMag encourages its readers to take up running. The claim is that this form of vigorous exercise can protect against arthritis and heart disease, improve mental health and ultimately promotes longevity. The medical literature tends to support these claims. But the benefits aren’t afforded exclusively to runners. Instead of focusing on a specific type of exercise, consider the following data as an incentive to engage in whatever form of physical activity you prefer. (5,6)

Tara Parker-Pope recently posted a link on her nytimeswell Twitter account that questions many of the commonly accepted beliefs about learning. What do you think science tells us about the ideal learning environment? Many would say that an optimal work space should be quiet and that you ought to stick to a regular schedule, setting boundaries and goals to enhance your performance. And of course, dogged, single-minded dedication to a particular task is also paramount to academic success. But you may be surprised to find out that behavioral scientists aren’t always in agreement with these commonsense guidelines.

Over the past few decades, new evidence-based theories have emerged about how students of all ages can learn best. Some of the key findings include: a) alternating study locations to improve retention; b) varying the type of material you study (ex: grammar, reading, vocabulary) can “leave a deeper impression on the brain” and improve test performance; c) spacing out study sessions is more effective in promoting long term learning than fewer, more intense, study periods. What’s interesting is that this new school of thought appears to benefit the learning process of both younger and older individuals. (11,12,13,14,15)

In an odd way, researching medicine is similar to being a filmgoer. Every once in awhile I’ll find a study that is absolutely innovative. But most of the time I pour through research that treads over familiar territory. That doesn’t mean that it’s not valuable. It’s just not groundbreaking. Thankfully, if I look very carefully, I’ll frequently find some intriguing details in almost every scientific paper I evaluate. Likewise, most films contain elements that we’ve all seen before – a death-defying car chase, comedic banter between two rivals, special effects that transport us to a different world, etc. However, we can still enjoy the show because of the small details that differ from film to film. The same is true of medical data. It reminds you of what’s important to know and sometimes offers novel clues about what’s new and what’s to come.