Nutrition is a field fraught with countless misconceptions that are purveyed by virtually every major segment of the dietary landscape. Do you think you can trust the advice given from the ivory towered medical institutions with easily recognizable names? If so, then why is the U.S. and the majority of the industrialized world suffering from so many preventable diseases that are largely influenced by diet? Think you can trust your friendly neighborhood health food store to steer you right? Just take a look at some of the labels on the cereals, protein bars and soft drinks they sell at their establishments. Some of the ingredients are organic, but the overall nutritional content is often similar to what you’ll find in conventional vending machines. In some instances, it may even be worse if they feature trendy ingredients such as agave nectar which is extremely high in fructose. The best way to avoid the many pitfalls that surround this topic is to be informed. Use science as a tool even when those giving you dietary advice fail to do so. 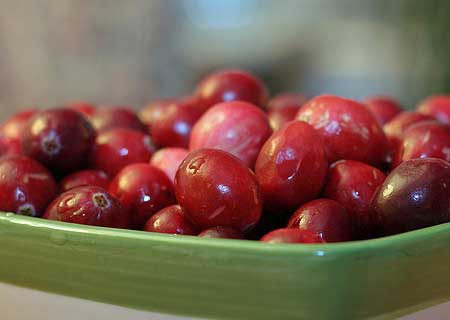 Walk into a health food store and ask what they’d recommend for symptoms of an enlarged prostate.  A number of viable options will likely be mentioned – beta-sitosterol, pygeum, saw palmetto, etc. Cranberry extracts are rarely listed among the possible therapeutic options. According to a new study in the British Journal of Nutrition, they probably should be. In this research, 42 men with lower urinary tract symptoms (LUTS) were provided with 1,500 mg/day or dried cranberry extract or a placebo over a 6 month period. Various measures of prostate function and health were taken at baseline, after 3 months and at the completion of the randomized study. Those receiving the cranberry supplements showed a statistically relevant improvement in International Prostate Symptom Scores, quality of life and urinary parameters such as “average flow”, “post-void residual urine volume”, “rate of urine flow” and “total volume”. A reduction in elevated prostate-specific antigen (PSA) was also evidenced. No differences between the groups were noted with respect to serum testosterone levels and systemic inflammation (C-reactive protein). (1)

When it comes to media coverage of cancer and heart disease, a common villain that is cited is red meat. On the other hand, fish is often regarded as a much better option due to its healthy fat content. The fact of the matter is that both protein sources can be healthy or unhealthy. There are many variables involved including the quality of each and the foods with which they are combined. One of the finest sources of red meat comes from cattle and lamb that are allowed to roam freely and fed wild grass. The September 2010 issue of the British Journal of Nutrition reports that consuming three portions of grass-fed protein per week can successfully raise omega-3 fatty acids in blood and platelets as compared to eating conventionally raised meat. Omega-3 fatty acids are abundantly found in fish and are the darlings of the nutritional world. It would seem that replacing grain-fed meat with grass-fed sources may offer an appealing and practical way of satisfying meat lovers and nutritionists alike. (2)

Dairy products are frequently in the crosshairs of conventional and holistic health experts. Establishment nutritionists voice concern about the allergenicity of dairy protein, cholesterol and lactose contained therein. Natural health authorities question the feed given to most cattle and processing that occurs after the milk is collected – homogenization and pasteurization. A recent article in the journal Annals of Rheumatic Diseases urges both sides not to dismiss milk out of hand – especially if you have gout in your fingers. A group of 16 healthy male volunteers participated in a short-term, randomized, controlled, crossover trial in which they were given milk or soy milk. Uric acid measurements were taken before drinking the respective milks and then hourly for 3 hours post-ingestion. An average 10% increase in urate was detected after drinking the soy milk. Conversely, a 10% decline in uric acid was noted after drinking the cow’s milk. These findings are supported by previous investigations which document dairy-induced, anti-inflammatory effects and an enhancement of urate excretion. (3,4,5)

Over the past year and a half I’ve tried to present a balanced and realistic portrait of the health effects of consuming soy and other foods rich in isoflavones or phytoestrogens. The topic of soy inspires a great of passion on both sides of the debate. One area at the center of the controversy is the impact of including soy and soy products in the diets of children. The implication is that the plant-based estrogens contained in such legumes may accelerate sexual maturation in girls and delay it in boys.  To test this theory, scientists from the Research Institute of Child Nutrition in Dortmund, Germany examined the diets of 227 boys and girls. Dietary records and urinary isoflavone levels were taken and compared to the timing of puberty in this select study population. The determination of the researchers was that: a) the onset of puberty in boys did not appear to be affected by isoflavone intake; b) girls who ate the largest amounts of phytoestrogens demonstrated a later onset of puberty. It’s also interesting to note that fiber intake did not seem to affect pubertal development in either gender. (6)

The final misconception I want to address is the issue of protein and satiety. Many health experts and laypeople assume that eating whole protein sources will satisfy hunger more efficiently than powdered protein supplements. However, a group of Australian scientists disagree. The basis for their dissent is an experiment they recently conducted. In it, twenty-two study volunteers were asked to consume 4 liquid test meals on separate occasions: 1) egg; 2) tuna; 3) turkey; 4) whey protein. A randomized, cross-over design was used to determine the blood sugar impact and satiating effects of drinking each protein and subsequent food consumption in a buffet meal eaten 4 hours later. Their findings were that whey produced a significantly lower elevation in blood sugar as compared to egg and turkey and a comparable effect in relation to tuna. More importantly, the participants’ hunger scores and subsequent food intake was lower after the whey protein intervention. According to the study authors, this indicates that whey protein has “a potential for appetite suppression and weight loss in overweight or obese individuals”. (7)

The information highlighted today can be put to use in any number of ways. Some of it may directly apply to your life and the health issues you currently face. Other items may not be specifically applicable today. But that’s not to say that it won’t be useful to you or those you care about in the future. If you decide to file this data awhile for another time, please note that there is a functional search feature on my site. So if somewhere down the line, cranberries, grass-fed meat, gout, isoflavones or whey protein become more relevant, you can easily track down this column once again.