We’re all exposed to a fair share of advice and information about how to best to care for ourselves. If we’re fortunate, we also have the benefit of good counsel via a physician. But, ultimately, it’s up to us to decide what exactly to do with respect to our own health care. Do we take a medication or not? Are major lifestyle changes worth the effort? Should we have genetic testing to help foretell our medical future? Most people will be faced with these decisions and many others during the course of a lifetime. Today I’m going to tell you about a major health care choice I’ve decided to make in my own life. It involves following a diet known as “alternate day fasting”. My Healthy Monday tip of the week is to discuss the viability of this pattern of eating with your doctor if you’re concerned about cardiovascular health. 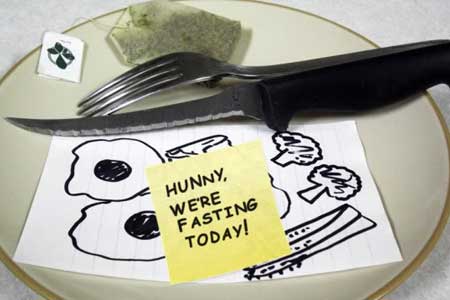 It’s long been established that ongoing caloric restriction can prevent various disease states and increase life expectancy in test animals. The periodic restriction of calories is also known to exert “mild dietary stress” in the body which approximates the way humans used to live during the hunter-gatherer era. What’s more, a recent laboratory study examined blood samples of study volunteers engaging in alternate day fasting (ADF) and found profoundly positive changes with respect to the aging process (cell proliferation and Sirt1 protein). All told, these facts form a strong theoretical basis for studying the effects of alternate day fasting in human subjects. (1,2,3,4,5)

Before I go any further, let me briefly describe the simple process behind ADF. The basic concept is that you eat regularly on one day. The next day you eat only one meal which is slightly smaller in size than usual. In effect this means that you’d eat at 100% capacity on one day and only 25% on the next. The following day, 100%. The day after that, 25% again. Typically, the one fasting day meal is consumed around the mid-day mark. On fast days, you’re encouraged to drink as much water and non-caloric beverages (black coffee, herbal tea, etc.) as you wish. Here’s an example of a healthy ADF menu from my perspective:

A study appearing in this month’s edition of the Nutrition Journal examined the effects of a 10 week ADF trial in a group of 16 obese men and women. A significant amount of weight loss (12 lbs) was reported on average. But more importantly, two key findings were demonstrated: a) the participants didn’t eat extra food on feed days; b) hunger levels decreased and remained low beginning at the 2 week mark of the intervention. In other words, their bodies adapted to this style of eating without compensating with additional calories on the normal feed days. The hunger issue is also of vital importance because it speaks directly to the sustainability of ADF. (6)

Only time will tell if alternate day fasting will, in fact, promote longer, healthier lives in large human populations. But here’s what we currently know with absolute certainty: Diabetes and heart disease are two of the leading causes of premature death worldwide. Alternate day fasting has been scientifically documented to mitigate many of the risk factors involved in both diseases.

In studying the full texts of the currently published ADF studies, I discovered an area that I felt could use some improvement – nutrient density. As an example, let’s take a look at three days of sample menus from the most recently published trial in the Nutrition Journal:

In my previous two-part interview with Dr. Krista Varady, a leading expert in ADF, she basically stated that the nutrition provided during the ADF clinical trials conforms to the mainstream dietary guidelines that are currently advocated. In my opinion, these guidelines leave much to be desired. For starters, the high-carbohydrate count in such menus (over 50% of total calories) could very well explain why the current batch of ADF studies have failed to find any HDL (“good”) cholesterol elevation. Previous studies using low carbohydrate dietary models have reported substantial improvements in good cholesterol. The most recent two-year trial discovered a statistically significant 23% rise in protective HDL concentrations in those consuming a carbohydrate-restricted diet. (10,11,12)

At present, I’ve been following an alternate day fasting regimen for about three-weeks. So far, my energy levels are good. I’m able to function normally and work out every other day. My blood pressure and blood sugar are better than ever. In addition, there are some other side-benefits worth noting. Our weekly grocery bill as reduced substantially, I’ve dropped 5 lbs and, best of all, I have more time to devote to activities other than eating and preparing food. It turns out that ADF is a money and time saver. In a few months I’ll have a blood panel conducted to compare those figures to my previous numbers. I’ll report back on what I discover and add some additional observations at that time. In the meantime, if you have any questions about how I’m implementing ADF in my own life, I’d be happy to share.


12 Comments & Updates to “My Fasting Experiment”