Cooking can be an adventure. I recently undertook a recipe that involved using an ingredient and cooking technique that were completely new to me. In doing so, there was a certain degree of excitement and trepidation involved, but it’s precisely that kind of risk and uncertainty that can produce a richly rewarding (and delicious) experience. Today’s recipe now ranks among my favorite seafood meals of all time. What’s best of all is that I know exactly how it was made and the quality of the healthful components contained therein. 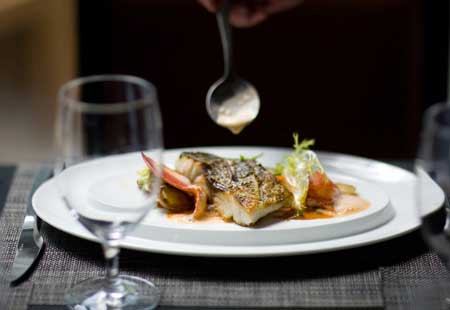 The refrain, “Eat more fish” has become quite commonplace in the medical and nutritional fields over the past few decades. From time to time, I think it’s valuable to revisit the reasons why eating regular servings of seafood is a worthwhile pursuit. A cursory scan of the current medical literature affirms several health benefits relating to frequent fish consumption including: a) a lower risk of blood sugar and cardiovascular risk collectively known as metabolic syndrome; b) protection from endometriosis and fibroadenomas (benign tumors of the breast); c) “significantly better overall self-reported health” and a lower likelihood of being “admitted to a hospital”; d) supporting weight loss efforts as part of a healthy diet plan. (1,2,3,4,5)

One of the more interesting aspects to today’s recipe is the use of organic cauliflower in the aioli that serves as a sauce. The original inspiration for this came from a recipe that used the inside flesh of a white potato. In low carbohydrate circles, it’s well known that cauliflower can often replace potatoes in a variety of dishes. The obvious reason to do so is because cauliflower is much lower in calories and carbohydrates, and higher in dietary fiber and nutrients. But beyond that, there is a class of phytochemicals present in cauliflower and other cruciferous vegetables that make them particularly appealing with respect to cancer protection. Broccoli, Brussels sprouts, cauliflower, kale and other Cruciferae contain therapeutic substances known as glucosinolates which consistently been shown consistently to reduce the incidence of a variety of malignancies including breast, colorectal, lung and prostate cancers. (6,7,8,9,10)

Arrange the racks in the oven so that there’s some space between them. Pre-heat the oven to 400° F. Place parchment paper on a large baking sheet and drizzle with olive oil. Place cauliflower on baking sheet and turn so that it is coated in the oil. Season with freshly ground pepper and salt. Rough chop the shallots and sprinkle on top of the florets. Cook for about 15 minutes or until the cauliflower become slightly browned and crisp. Leave the oven on at the 400° F setting.

Place roasted cauliflower in a food processor and add the garlic cloves, the juice of one lime and two egg yolks. Pulse the mixture while slowly adding 4 oz of organic olive oil until smooth and creamy. Taste for seasoning. Salt and pepper accordingly. Cover and refrigerate the aioli until ready to serve.

Spread about a 2 foot sheet of aluminum foil on a flat surface. Place the same size parchment paper directly on top of the foil, with half of the foil and paper hanging off the counter in front of you. Position each fillet horizontally in the center of the bottom portion of each sheet. Leave at least 1 1/2 ” on each side and about 5″ below the fillets. Drizzle each fillet with a Tbs of olive oil, then salt and pepper. Top the filets with three slices of lemon and a generous of sprinkle of fresh dill and parsley. Fold in the parchment paper and aluminum foil along the two sides and top to form a pocket and a tight seal around the fish, with some air inside the enclosure. Place two fish packets each on a large baking sheet. Add a little water to the bottom of the baking sheets to provide a little more steam to the oven. Place sheets on two separate racks in the oven and bake the fish at 400° F for about 15 minutes. The packets may swell a bit as they cook.

To serve, remove the fish from the paper packets and top with the cauliflower aioli. If there’s any aioli left over, it can be used in many other dishes – from sandwich spread to vegetable dip. But keep in mind that the aioli is perishable and should be consumed within a few days.

As healthy as cauliflower can be, it’s important to note that how it’s consumed and prepared can impact its health promoting potential. As you might expect, eating raw cauliflower is always a good way to go. In fact, you can very easily dip raw cauliflower florets in the above aioli for a cauliflower doubleheader. In dishes that require cooked cauliflower, roasting and steaming are acceptable forms of preparation. However, boiling should be avoided. Many of the therapeutic components of cruciferous vegetables are water soluble. When they make contact with water during the cooking process, a large proportion of the healthful nutrients and phytochemicals are lost. On the other hand, eating these vegetables with some form of animal protein may actually increase the absorption of glucosinolates. (11,12,13)

You may have noticed that my recipe calls for raw egg yolks. This may cause alarm in some and understandably so due to recent headlines. If the remote risk of Salmonella infection is of concern to you, you can seek out pasteurized eggs. I’d also like to point out that several of the ingredients in the cauliflower aioli possess significant antimicrobial activity. In fact, laboratory studies have discovered that garlic, lime juice and olive oil can directly combat Salmonella. In our home, we only use organic, free-range eggs as an additional long term measure to reduce the risk of Salmonella exposure. (14,15,16)

The most gratifying part of preparing this recipe was the final result. The branzino was so delicate and moist. The aioli contributed a hearty and complex counterpoint. This was such a satisfying meal! In fact, it actually reminded me of similar dishes we’ve had in the finest of restaurants. And the truth of the matter is that it really wasn’t very challenging to make. It took some prep work. But the actual cooking process was quite intuitive and straight forward. If you prepare this recipe at home, I hope you’ll find it to be as rewarding an experience. Enjoy!