This past week several readers inquired about my opinion on the U.S. Food and Drug Administration’s pending approval of a genetically modified salmon known as AquAdvantage. I’ve decided to share my perspective in the context of a column so that you might all understand my position on this controversial topic. My hope is that it helps you to decide whether GMO salmon is right for you and your families. 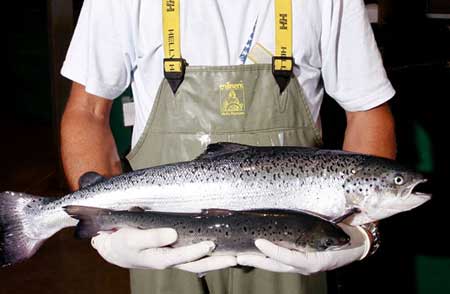 Genetically modified organisms (GMOs) will almost certainly play a greater role in the future of the world’s food supply. For better or worse, this is an inevitable fact. If they can be supplied in a manner that is safe for the environment and its inhabitants, this is almost certainly a positive scientific development. Among other benefits, GMOs have the potential to address food shortages and preserve dwindling wildlife populations the world over. However, that’s a big “if”. Many pressing questions remain to be answered.

The “product” that the US FDA is currently evaluating was created by combining a gene from the largest salmon (Chinook salmon) and splicing it with the DNA of Atlantic salmon. The result is a variety of salmon that produces growth hormone under a broader range of conditions and, thereby, hastens its rate of growth considerably while reducing feed requirements. (1,2,3)

There are several issues at the crux of the controversy surrounding the approval process. For starters, there’s the source of information the FDA is using upon which to base it’s decision. In this case, the majority of the research has been carried out and/or funded by the developer of this GMO salmon, Aqua Bounty Technologies, Inc. This obviously leaves much to be desired. Please understand that I’m not a big-business hater or conspiracy theorist. I simply subscribe to the scientific principle of independent and unbiased testing of claims. (4)

Another disconcerting detail is that there are no “whole-food feeding studies” (in animals) or human studies involving AquAdvantage salmon currently published in the medical literature. The only research that’s been peer-reviewed and published involves biological and nutritional differences between GMO salmon vs. non-GMO salmon samples. Questions pertaining to allergenicity and the health effects of AquAdvantage in living organisms have yet to be conducted and/or published. The reason appears to be the position of Aqua Bounty and the US FDA that this GMO salmon is essentially the same as farmed and wild salmon, and so requires no additional proof of safety. The irony here is that salmon, themselves, have undergone testing to determine whether feeding them GMO food is harmful to their health. (5,6,7,8,9,10,11,12)

The dispute between those who are in favor of approval and those against continues with respect to a potential environmental threat. What would happen if this newly created salmon made its way into the wild and procreated with non-GMO fish? Once again, Aqua Bounty and the FDA have an answer on hand. The GMO salmon will be farmed in “physically contained systems” apart from wild populations of fish. What they’re referring to are essentially large pens/pools housed in enclosed, land-based locations such as warehouses. A secondary precaution they’re taking is to only produce genetically modified female eggs that are sterile. This sounds like a reasonable safe guard. However, not all environmental experts are entirely sold on this safety strategy. Dr. Brian Ellis, a biotechnologist at the University of British Columbia, Vancouver notes that, “This is a self-replicating animal whose life cycle is still not very well understood, and most of it takes place far beyond human intervention out in the ocean”. He adds that, “We’re looking here at a scenario where the fish might wind up sooner or later in the ocean. I think if we go down this route, we have to be prepared to accept some potentially unknown consequences.”(13,14,15,16,17)

GMO Corn May Cause Kidney and Liver Damage in Rats

A final issue worth considering is the manner by which GMO salmon will be introduced into the consumer marketplace. Aqua Bounty doesn’t believe that their product should labeled clearly so that the public can decide whether they want to buy it or not. According to the company, “Food labeling is intended to provide information on product composition and safety. Because salmon grown from AquAdvantage® eggs are nutritionally and biologically the same as any other Atlantic salmon the consumer purchases, there is no reason for it to be labeled as different. Voluntary labeling is sometimes acceptable, but would be the responsibility of the fish growers.” Will the FDA stand for this or require some sort of labeling? That remains to be seen. (18)

Whenever I consult with a client or offer an opinion on this site, I make sure to present the same information that I would give to a loved one. Even if AquAdvantage receives the FDA seal-of-approval, I still would not recommend it or use it myself. On numerous occasions, FDA-approved drugs have been recalled years after being approved due to adverse reactions found in post-market drug safety analyses. The same may hold true in the case of some or many GMO products. Until I see reliable, third-party evidence to support the safety of GMO salmon, I’ll consider this to be an experimental product and avoid it. But what I will do is keep a close eye out for allergic reactions and other potential disadvantages and side effects associated with the consumption of AquAdvantage. If they don’t present themselves, I’ll gladly reconsider my position down the line.