By now, most health conscious consumers understand that eating potato chips regularly does not contribute to long term wellness. This truism even extends to cleverly marketed brands that feature alluring package claims such as, “All Natural!”; “Baked, Not Fried!”; “Featuring Organic Potatoes!” and “Now With Sea Salt!”. The intrinsic problems with potato chips still remain even if the finest ingredients are used. First and foremost, potatoes are high-glycemic vegetables which can cause harmful fluctuations in blood sugar. The baking and/or frying process is also part of the problem. It generates a carcinogenic chemical compound known as acrylamide. But the desire for something crunchy and salty to snack on runs deep in people throughout the world. What to do? Perhaps it’s time to think outside of the box and consider something entirely different, but equally delicious: seaweed. That’s right – seaweed. 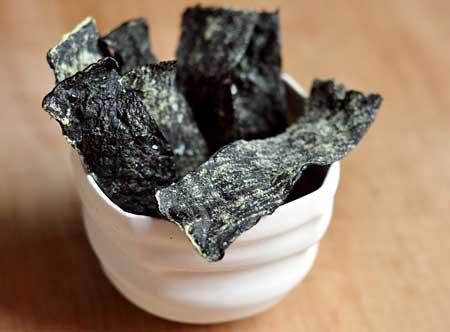 Many people are familiar with nori as the dry, bright green seaweed that is wrapped around sushi rolls. But what you may not know is that it’s also a low-calorie, nutritional powerhouse which may possess both specific and broad ranging health benefits.A May 2010 publication in the British Journal of Nutrition concluded that Korean women who consumed the most seaweed were at a 52% lower overall risk for breast cancer. There are several proposed theories that could explain this documented protection: a) seaweed may favorably alter estrogen metabolism; b) antioxidants found in algal extracts appear to directly combat the growth of cancer cells; c) seaweed contains safe levels of iodine – a nutrient which plays a role in “maintaining normal breast tissue architecture and function”. (1,2,3,4,5)

The nutrient density of nori extends to both minerals and vitamins. Recent studies in the British Journal of Nutrition and the Journal of Nutrition report that seaweed is a bioavailable source of iron and Vitamin B12. It’s important to note that the B12 found in nori or Porphyra Yezoensis mostly consists of the highly desirable, coenzyme form of the nutrient which has been shown to improve Vitamin B12 levels in animals with a deficiency. (6,7,8,9,10)

Another little known benefit of eating seaweeds and sea vegetables is that they can assist the body in successfully processing and excreting toxic chemicals including dioxin. Nori and other chlorophyll-rich vegetables accomplish this by inhibiting the absorption and re-absorption of environmental pollutants in the gastrointestinal tract and facilitate removal via normal eliminative pathways. (11,12,13,14)

Begin by pre-heating the oven to 250° F. Lay 2 sheets of nori side-by-side on a large cutting board. Lightly spray or “paint” water on the sheets – just enough to make them slightly sticky, but not enough to turn it back into soft seaweed. Sprinkle the dampened nori with salt. Cover the damp, salted Nori sheets with the 2 remaining dry sheets so that the two sheets fit directly on top of each other. You should now have 2 nori “sandwiches”. Use a pizza cutter or sharp knife to cut the two double-sheets of Nori into square or rectangular chip-sized pieces. You can multiply the amounts in the recipe to make a larger amount of chips. In a small mixing bowl, add your wet ingredients (olive oil and Tastes Like Honey). Stir until combined. Use a pastry brush to apply the honey-olive oil mixture onto the surface of the nori pieces. Lightly dust the painted nori with the Asian seasoning and pat on the sesame seeds so that a generous amount will stick. Place in the oven for about 15 – 20 minutes.

The Asian seasonings I used in this recipe were basil, cayenne pepper, coriander, garlic, lemongrass, onion, paprika and white pepper. The blend is traditionally used to flavor duck, fish, pork, poultry and vegetables. In the context of this recipe, it imparts a multidimensional flavor profile which melds beautifully with the sea-like notes of the nori.

Several of the herbs and spices in the seasoning blend also contribute potential health benefits. Coriander seeds are known to lower cholesterol and triglycerides in animal models by “decreasing the uptake” and “enhancing the breakdown on lipids”. Lemongrass contains a component known as citral which combats inflammation, in part by regulating COX-2 enzyme expression – a process commonly employed by synthetic pain relievers. Finally, paprika is documented as containing a broad-spectrum of protective antioxidants including ascorbic acid (Vitamin C), beta-carotene (pro-Vitamin A), non-nutritive carotenoids and polyphenols. (15,16,17,18,19,20)

The idea of eating crisp seaweed as a snack food may seem quite foreign in more ways than one. Coming from an Italian-American background, no one knows this more than me. But trust me when I tell you that these savory-sweet nori chips have now secured a regular spot in our kitchen pantry. We keep them on hand for ourselves and for surprise guests. However, the reasons run deeper than just the great taste and the nutritional merits of replacing potato chips. Adding ethnically diverse foods to your culinary repertoire helps to keep your diet interesting. Simply put, pumping up the flavor quotient and variety in your meals and snacks is one of the best recipes for long term dietary success.