In my youth, one of my hobbies was investigating psychic claims. On occasion I would come across individuals who were convinced that they could predict the future. Mind you, they weren’t trying to sell any books or profit from this supposed gift. They simply believed that, on occasion, they were privy to glimpses of what was to come. My simple piece of advise to them was as follows: E-mail me a specific prediction that could be definitively verified. That way, we could both determine whether the prediction was accurate. The same basic principle holds true with respect to scientifically assessing medical claims. Anecdotes, personal experiences and observations are clearly of value. However, they tend to be subjective in nature. Applying a controlled model, such as a clinical trial, to test an anecdote allows for a more objective method by which to evaluate claims. 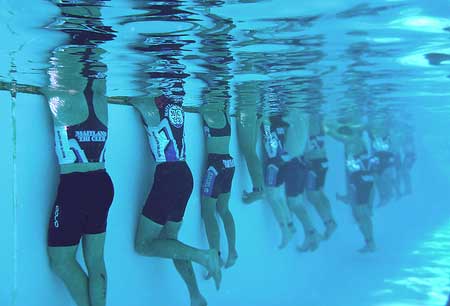 I found an intriguing tweet on the LATimesHealth twitter account this past week. It describes a study appearing in the August 2010 issue of the journal Medicine & Science in Sports & Exercise in which athletes were asked to cool off in a pool after engaging in a defined exercise protocol. This is a common and invigorating practice employed by amateur and professional athletes alike in an attempt to improve recovery and refresh after a strenuous exertion. Ten physically active men took part in three 40 minute treadmill workouts on separate occasions. After each workout, they spent a 20 minute recovery period in one-of-three ways: a) immersed in cold water (59 °F); b) immersed in neutral water (91°F) or; c) seated in a comfortable but dry environment. After each exercise session and recovery test, a breakfast buffet was served. The study participants ate more after the workouts where they practiced water-immersion recovery – 517 calories after the neutral water recovery; 489 after the cold water recovery; and 409 after the non-aquatic, seated recovery. Furthermore, blood tests indicate that the participants had higher serum levels of ghrelin and lower concentrations of leptin. These are so-called “hunger hormones”. The former tends to increased appetite, while the latter reduces sensations of hunger. These findings could be relevant to anyone who’s using exercise to help manage weight. (1,2,3)

Katherine Hobson is a regular contributor to the Wall Street Journal health blog. She recently tweeted about an alarming trend in the reported cases of celiac disease (CD) or gluten intolerance in the adult population. This flies in the face of previous notions that autoimmune reactions to gluten, a protein found in many grains, typically begins and/or develops in childhood. The basis for the WSJHealthBlog column is a current publication appearing in the Annals of Medicine. In it, blood samples of 3,511 men and women were analyzed for markers of celiac disease twice over a 15 year period. At the beginning of the examination, only 1 in 500 of the study volunteers tested positive for this autoimmune condition. However, that number rose considerably when the subsequent testing took place. Upon testing a second time, the researchers discovered that the incidence of CD had risen to 1 in 219. This strongly suggests that gluten intolerance can develop in adulthood. One of the lead authors of the study, Dr. Alessio Fasano, suspects that a negative shift in gut bacteria due to antibiotic use and surgery may be partially responsible for this unwelcome development. This theory remains to be tested in humans. Preliminary animal and in-vitro (test tube) investigations are already underway. (4,5,6,7,8)

As helpful as science can be, it’s not always foolproof. For instance, many people who test negative for celiac disease still find that avoiding glutenous grains may resolve select symptoms including digestive problems and mood disorders. Gluten-avoidance is not a necessity based on the results of their blood work. However, they simply feel better if they omit barley, rye and wheat from their menu plans. In fact, temporarily following an eating protocol known as an “elimination diet” can sometimes identify problematic foods that other conventional testing may miss. Ideally, it’s best to use blood and skin prick tests in addition to self-tests, such as an elimination diet, in cases of suspected allergies and sensitivities. (9,10,11)

The harsh reality of science is that it sometimes tells us things we don’t want to know. As helpful as it may be, it’s hard to avoid many common food allergens such as corn, dairy, grains and soy. These foods are mainstays in the modern food supply. What’s more, even those who try to avoid allergenic foods sometimes fall short of their goals. I encounter this reality quite often when working with individuals with dietary sensitivities. So in closing, I thought we should turn to a consistent voice of calm and wisdom: my fellow tweeter, Dr. Wayne W. Dyer. It’s as though he’s offering this week’s guidance directly to us. “Healthy habits are learned in the same way as unhealthy ones – through practice” and “Guilt means that you use up your present moments being immobilized as a result of past behavior”. Try, try and try again when pursuing difficult health goals, but don’t beat yourself up when you fall short. We all do. But ultimately, we all have much better chance of long term success if we don’t give up. (12)