When cold and flu season arrives each year, so do questions pertaining to natural means of defending against it. Just the other day I was asked about using echinacea to fend off influenza and/or help speed its departure. Thankfully, each year there’s additional research to factor in when coming up with an answer. 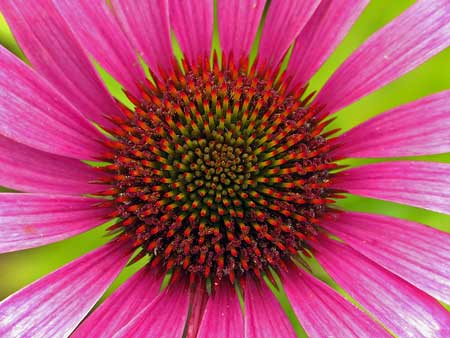 According to a recent publication in the journal Preventive Medicine, patients who regularly use alternative and complementary medicine are significantly less likely (-32%) to receive flu shots. However, there were certain limitations to the research in question. The definition of “alternative and complementary medicine” was narrowly translated to those who received chiropractic care. In addition, a study pool of only 27,000 US citizens was used to come to this conclusion. Still, I have a hunch that these figures aren’t too far off the mark based on my own experience dealing with large segments of the natural health community. (1)

The exact statistics are less important than the realization that some segments of the population will choose not to have a flu shot year after year. This same group is more likely to resort to natural alternatives to anti-viral medications. With this knowledge in mind, I’d like offer the best possible information I currently have on echinacea and influenza. (2)

You may be wondering why one study found direct anti-viral activity and another did not. Variations in the phytochemical composition and concentration of the respective echinacea extracts could be responsible for this noted difference. Echinacea is composed of a great many active ingredients including alkylamides, cichoric acid and polysaccharides. How echinacea is extracted and grown are but two considerations that can affect the end product. (6)

Animal and test tube studies only go so far. What most consumers and physicians want to know is whether a natural remedy will have a positive effect in a real world setting. The closest thing we currently have to an answer comes in the form of a trial published in August 2000. Researchers from York College of Pennsylvania enrolled 95 men and women with “early symptoms of cold or flu” in an experiment which provided: a) an echinacea-based tea (Echinacea Plus) or b) a placebo tea. Questionnaires quantified symptoms such as fever, runny nose and scratchy throat for 14 days after beginning each tea regimen. The participants who received Echinacea Plus reported faster relief of symptoms than those consuming the placebo tea. (7)

At the moment, there isn’t a strong scientific case to be made for using echinacea to prevent or shorten the duration of influenza. The primary reason this herbal remedy is recommended for this purpose is because of its noted ability to support the immune system. In my opinion, this is reason enough to consider using it on an “as needed” basis – especially if you’ve found positive results with echinacea in the past. In closing, I’d like to offer my best advice about how to get the most out of echinacea should you decide to use it: Opt for a clinically validated supplement such as Echinaforce, Echinacea Plus or Echinamide. Make sure to use said supplements as directed. In the case of Echinacea Plus tea, this may mean drinking up to six cups daily. Only use echinacea when your defenses are compromised or when you’re trying to overcome an infection. Finally, please consult with a qualified medical professional if you have a pre-existing disease, are uncertain about what condition you may have or the appropriateness of combining echinacea with conventional drugs. The last thing you need is to confuse influenza for a pneumonia or find yourself suffering from a drug-supplement interaction. (8,9,10,11,12,13,14,15,16,17)