Chronic constipation is estimated to affect approximately 1 in 6 adults living in the US. It’s even more prevalent in senior citizens. Dehydration, inadequate nutrition, lack of physical activity and medication side-effects all contribute to the problem. Many imperfect solutions abound including fiber supplements, laxatives and stool softeners. But in my opinion that’s putting the horse before the cart. The first thing that should be addressed in instances of recurrent constipation is diet. However, it might surprise you to know that just adding whole grains to your diet won’t solve much. Grains of any stripe frequently cause adverse digestive and systemic reactions. In my opinion, a better option is to incorporate gentler sources of dietary fiber and healthy fats into your daily routine. (1,2,3) 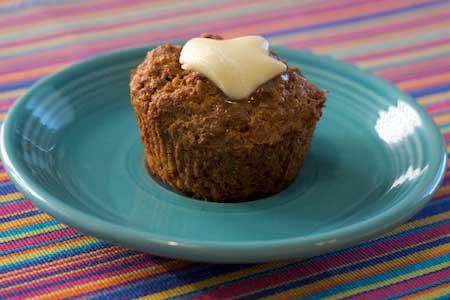 If you compare the nutritional labels of some of the best selling whole wheat breads on the market, you’ll notice that they generally provide about 2-3 grams of roughage per slice. Protein content is typically in the range of 4-5 grams and the fat contribution is almost always negligible. These figures are relatively consistent among the many whole grain breads currently available in health food stores and supermarkets alike. (4,5,6)

This past weekend I created an alternative to whole grain bread in the Healthy Fellow test kitchen – one that can be easily prepared and enjoyed. As an added bonus, it may also be a more effective means of promoting regularity. Instead of using wheat or other glutenous grains, I opted for three nutritious sources of insoluble and soluble fiber: almond flour, shredded coconut and sprouted flax meal. The inclusion of a healthy source of fat in the form of coconut oil further facilitates the elimination process while also supporting other aspects of well-being including improvements in cardiovascular biomarkers and cognitive functioning.

Pre-heat your oven to 350°F. Combine the dry ingredients in a large mixing bowl. In a separate bowl, whisk the eggs, liquid stevia and vanilla extract together. Stir the liquid mixture into the dry ingredients until it forms a smooth batter. Allow batter to rest and thicken for 10-15 minutes. Grease a muffin pan and fill with batter to the top of each muffin mold (makes 6 large muffins). Bake for about 20 minutes or until an inserted toothpick slides out cleanly.

The are numerous reasons why I prefer these muffins to whole grain bread. Organic flax seeds are not only an excellent source of dietary fiber. They also contain plant-based omega-3 fatty acids (alpha linolenic acid) and therapeutic phytochemicals such as lignans. Animal and human investigations have revealed that flax seed fortified diets may help slow the progression of atherosclerosis, reduce the risk of select cancers including ovarian and prostate malignancies and may even support fertility by improving the functional quality of sperm. (7,8,9,10,11)

The remainder of the ingredients that make up this humble muffin also deserve attention: Recent evidence suggests that eating almonds regularly may be an effective means of protecting bone density via a reduction of osteoclast formation of up to 20% and calcium release of about 65%. A current trial reports that consuming omega-3 enriched eggs can significantly increase lutein levels in healthy adults. Lutein is an antioxidant carotenoid found in egg yolks and a variety of foods such as avocados and green leafy vegetables. Many scientific investigations and reviews have identified lutein as a possible aid in protecting against eye conditions (age-related macular degeneration and cataracts), cardiovascular disease and sun related skin damage. (12,13,14,15,16)

I hope I’ve already made a strong enough case for you to try out my Coconut Flax Muffins. If not, consider the following: eating a breakfast that’s rich in dietary fiber, healthy fats and protein can help you manage appetite and weight. These are the three primary nutritional components that provide a satiating effect. One morning, eat a piece of whole wheat toast with your typical toppings and see how long it takes for you to get hungry afterward. The following morning, eat one of these muffins. Take note of how long you stay full in comparison. I’d be very surprised if you don’t find that the muffins keep you feeling full for a considerably longer period of time. As a final note, these are also an excellent breakfast or snack if you’re ever on the run. This is my idea of a functional and health promoting fast food breakfast. (17,18,19)