This is part one of a two-part series on the mental and physical benefits of simple, everyday exercise. In this first part, I want share some cutting-edge research that strongly suggests that exercising regularly can improve the odds of preserving our memory and mental function well into our “golden years”. 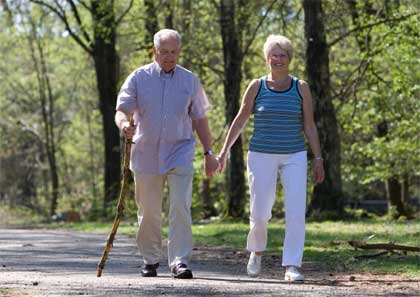 A study published in September in the prestigious Journal of the American Medical Association found that the mere act of walking three times a week could significantly benefit one’s memory. 138 adults averaging 69 years of age participated in this trial. They all reported having memory issues, but none of them were diagnosed with dementia or Alzheimer’s disease.

A portion of the 138 seniors were asked to exercise with “moderate intensity” for three sessions of 50 minutes each weekly. Most of the exercisers chose walking as their form of moderate intensity exercise.

After six months had passed, the researchers administered specific memory tests to determine if there was any improvement in the memories of the exercisers. Here’s what they found:

1. The exercise group did better on memory tests. Not only was their memory more accurate, but their retention ability also improved.

2. The researchers then assessed their Clinical Dementia Rating (CDR). A CDR is a type of “structured interview” by which a medical specialist determines the memory and mental performance of an individual. Those being interviewed are asked questions relating to their memories, their problem solving skills, their ability to take care of themselves, their home life and interests, etc.

A lower score was found in those who were in the exercise group. This means that they were less likely to be classified as suffering from dementia-like symptoms.

3. The benefits of walking were found to continue for more than a year after the study ended. In other words, even after the exercise stopped … the benefits still continued.

Finally, there were other rewards noted, such as improvement in depression, lower risk of falls, benefits to heart health and an overall improvement in “quality of life”.

What if I told you that your brain would shrink if you didn’t exercise? Would you believe me? Probably not. But, maybe you’ll believe this warning from the July issue of Neurology.

A study was undertaken to determine if frequent exercise had any impact on the size of the brains of people suffering from Alzheimer’s disease. 121 people participated in the study. They were all over 60 years of age.

57 of the 121 participants were diagnosed to be in the early stages of Alzheimer’s disease. Here’s what the researchers found:

+ Those with Alzheimer’s Disease who weren’t physically fit, had four times more brain shrinkage than the Alzheimer patients who were in good shape.

+ The author of the study, Dr. Jeffrey M. Burns, assessed the findings as suggesting (but not proving) that Alzheimer’s patients who exercised regularly suffered from “less brain shrinkage”.

+ Dr. Burns went on to say that “decreasing brain volume is tied to poorer cognitive performance”.

Link – Exercising for a Big Brain


6 Comments & Updates to “Exercise Your Brain”