Whenever possible I like to combine nutritional strategies that address more than one objective at a time. Eating more vegetables is a common goal for many of my clients. Likewise, drinking more water and curtailing overeating rank highly on their “to do lists”. It just so happens that there’s a simple technique that can support all three of these objectives and more. My Healthy Monday tip of the week is to include more homemade soup in your winter time routine. 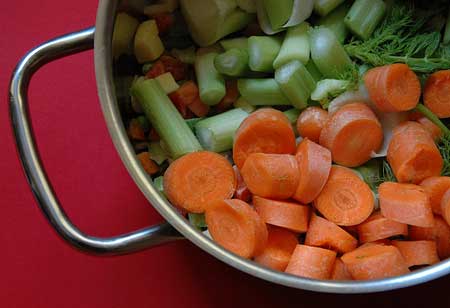 There are many reasons to recommend homemade vegetable soup. Firstly, it’s a delicious way to consume large amounts of vegetables without much effort. Another advantage is that the antioxidants and nutrients that are often lost during processing are retained in the cooking liquid or soup base. Finally, you can make any kind of vegetable soup you like at home at your convenience. There’s no need to eat lentil soup or minestrone if you don’t like legumes or pasta. This final point will be illustrated in tomorrow’s column. (1,2)

In the 21st century, vegetable soup generally isn’t thought of as a medicine. But perhaps it should at least be considered a medicinal food. Several studies dating back as far as 1995 have determined that vegetable-based soups are capable of promoting very serious physiological changes in the human body. Two trials conducted at the USDA Human Nutrition Research Center on Aging at Tufts University have reported that drinking 500 ml/day of a Mediterranean vegetable soup is capable of significantly increasing Vitamin C concentrations and “decreases oxidative stress and biomarkers of inflammation, which indicates that the protective effect of vegetables may extend beyond their antioxidant capacity”. These results are supported by an Indian and Spanish study as well. The Indian trial went on to document positive changes in cardiac enzyme levels in patients who had recently suffered a heart attack. (3,4,5,6)

Losing excess weight and/or preventing weight gain are powerful tools in the fight against the leading causes of disease and mortality worldwide – cancer, diabetes and heart disease. Numerous studies have shown that “preloading” with vegetable soup at the beginning of a meal is an effective means of reducing appetite and caloric intake by up to 20%. The added fiber and liquid in the vegetable soup probably makes one feel fuller longer. However, the real significance of using this ploy is that the nutrition contained in the soup more than makes up for the reduction in subsequent food intake. (7,8,9)

In my experience, there is also an intangible dimension to consuming soup. Drinking warm liquids soothes my body and mind. The relaxing effect is similar to how I feel when I sit in a jacuzzi or take a hot bath. It’s not quite that intense. But when I take the time to engage in this mind-body practice, there’s clearly a calming sensation. The trouble is that I can’t find any direct scientific evidence to substantiate this feeling. The closest I’ve come is finding several studies that report a mood elevating effect of a traditional Japanese sauce base/soup known as “dried-bonito broth”. Still, I feel it’s worth mentioning in the hope that some of you might find a similar “comfort effect” which may ultimately translate into greater control over your meal time selections. (10,11,12)

Tomorrow I’ll offer an example of a low carbohydrate vegetable soup that I make regularly in the Healthy Fellow test kitchen. What’s important to note is that vegetable soup recipes are exceedingly flexible. You don’t necessarily have to rely on a step-by-step formula found in a froufrou cookbook or presented by a famous chef on a cooking program. Simply use ingredients that you like. Just don’t forget to keep it health conscious by going easy on the salt and focusing on non-starchy vegetables. Instead of relying on added sources of sodium, boost the amount of culinary herbs and spices. In terms of vegetable selection, some of my top choices are: asparagus, broccoli, cauliflower, collard greens, green beans, kale, radishes, spinach and tomatoes. Choose whatever suits your palate while keeping nutrient density in the forefront. Until tomorrow …