Expressive writing is a stress management technique that encourages individuals to face emotional and/or traumatic events from their past. This sometimes cathartic experience generally takes place over the course of 3 to 5 sessions which last about 15 to 30 minutes each. In the process, some patients find that they gain greater control over their emotions and develop more confidence in dealing with stress which can result in positive outcomes in a variety of health conditions. Three recent examinations of expressive writing document favorable results in diverse patient populations: men and women with IBS (irritable bowel syndrome); students with eating disorders; and test subjects living with psoriasis. 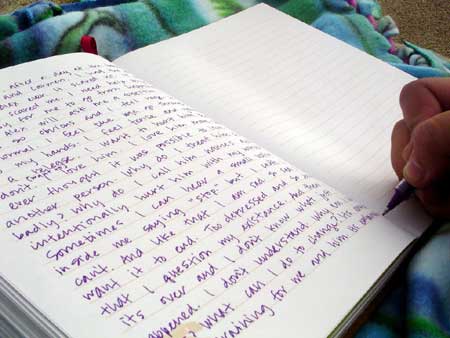 Researchers from the Boston University School of Medicine are the latest to report success using a modified expressive writing protocol. A total of 103 IBS patients took part in the study. The majority (82) engaged in four, 30 minute writing exercises that described “their deepest thoughts, emotions, and beliefs regarding the disease and their perception of its effects”. The remainder of the participants (21) acted as a comparison group. A battery of IBS symptom severity tests were conducted at baseline, 1 month post therapy and 3 months after the completion of the trial. Those engaging in the writing exercises experienced significant improvements in IBS scores at the 1 and 3 month mark. Benefits in cognitive performance were also noted. (1)

The September-October issue of the European Journal of Dermatology similarly focused on the potential of “emotional writing disclosure” as an adjunct to conventional care. In this trial, researchers evaluated its impact on patients with the skin disease, psoriasis. Forty psoriatic patients were all treated with ultraviolet B (UVB) exposure and one of three add-on therapies: 1) an expressive writing protocol; 2) writing about “major life goals”; 3) no writing/control group. The study volunteers who took part in an expressive writing routine “had a longer period of remission after phototherapy. This provides preliminary evidence that such a simple and inexpensive tool may play a role in enhancing treatment efficacy and QoL (quality of life”. (2)

The previous two examples illustrate the potential of expressive writing in conditions of a physical nature. Some psychological ailments, such as eating disorders, also appear to be responsive to emotional writing. This finding is presented in the May 2010 edition of the journal, European Eating Disorders Review. An 8 week investigation of two experimental writing tasks and a control task revealed that expressive writing addressed “specific features associated with eating disorder presentation” and that “therapeutic writing may be of value to this at-risk population”. The conclusion of the study encourages other mental health professionals to confirm and extend these preliminary results. (3)

A scientific summary from the publication Advances in Psychiatric Treatments offers an example of a step-by-step guide to one of the most basic forms of expressive writing. The authors, Drs. Karen A. Balkie and Kay Wilhelm, offered the following general instructions. “For the next 4 days, I would like you to write your very deepest thoughts and feelings about the most traumatic experience of your entire life or an extremely important emotional issue that has affected you and your life. In your writing, I’d like you to really let go and explore your deepest emotions and thoughts. You might tie your topic to your relationships with others, including parents, lovers, friends or relatives; to your past, your present or your future; or to who you have been, who you would like to be or who you are now. You may write about the same general issues or experiences on all days of writing or about different topics each day. All of your writing will be completely confidential. Don’t worry about spelling, grammar or sentence structure. The only rule is that once you begin writing, you continue until the time is up.” (4)

The common thread that connects the studies I’ve mentioned today is that they’ve employed expressive writing as a supportive therapy to professional care. No one is suggesting that expressing your emotions is some sort of panacea for every physical or psychological challenge faced by mankind. A more accurate and realistic view may be that denying or suppressing experiences and the feelings that accompany them may contribute to a worsening of body-mind health. Since expressive writing is easily accessible to almost all of us, I believe it’s worth considering in the context of a comprehensive treatment protocol. If this interests you, please consult with your health care team to determine whether it’s appropriate in your specific case. You might also seek out the works of the expressive writing pioneer, Dr. James W. Pennebaker. (5)