Juicing is one of the more popular ways to increase one’s consumption of fruits and vegetables. This nutritional strategy can support virtually any type of diet depending on the selection of produce. In addition, there’s a subset of the juicing crowd that employs this culinary technique in another capacity – as part of a detoxification and/or fasting regimen. It may surprise you to know that I’m not a big fan of juicing. However, I do support a slightly modified way of deriving many of the same benefits and more. My Healthy Monday tip of the week is to blend your fruits and vegetables instead of juicing them. 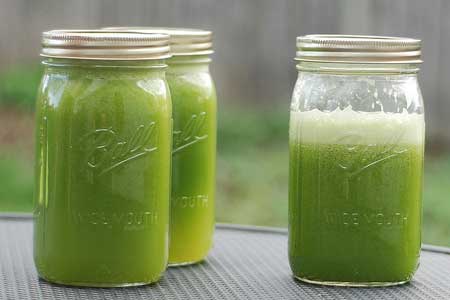 From a philosophical standpoint, my aversion to juicing is quite simple. Extracting the liquid elements of fruits and vegetables from the fibrous content just doesn’t jive with my idea of whole food nutrition. But in health and in life, I believe that one’s philosophy ought to be supported by objective facts whenever possible. There are numerous reasons why I prefer blending produce rather than juicing, and I’ll make my case using a series of examples from the medical literature.

Have you ever heard of a form of green tea known as matcha? Matcha is a powdered version of tea produced by grinding the leaves in a stone mill. This differs from most other Camellia sinensis preparations because it retains its fiber content. But there are other differences as well. Matcha is documented as richer in antioxidants than the more conventional forms of green tea. In fact, one investigation discovered that drinking matcha can impart at least three times as much EGCG, a potent phytochemical found in green tea, as compared to traditionally brewed preparations. (1,2,3)

Grapes, another antioxidant rich food, retain many of their medicinal properties in the dietary fiber that remains after the juice is pressed. Several studies have documented significant antioxidant potential and therapeutic effects when “grape antioxidant dietary fiber (GADF)” is fed to animals. One of the more intriguing findings is that this novel fiber source is capable of supporting the growth of beneficial bacteria such as L. acidophilus. The researchers involved theorize that a class of antioxidants (phenolic compounds) in GADF may interact with intestinal bacteria in such a way that may yield “healthy consequences”. (4,5,6)

Adding unrefined cocoa powder to freshly made juice may seem rather unusual. However, the thought of adding it to a blended beverage may be more appealing. From a health standpoint, cocoa fiber is an excellent example of the value of this dietary component that is frequently thrown out. Cocoa husks are not what most consumers and manufactures are looking for in a final product. That’s not chocolate! But both animal and human studies reveal that this “waste product” is capable of reducing many notable risk factors including: a) chronic constipation; b) elevated blood pressure, cholesterol and triglycerides; c) high blood sugar and insulin resistance; d) inflammation, LDL cholesterol oxidation and systemic oxidative stress and; e) weight gain. (7,8,9,10,11)

At this point, I think it’s important to address a prevalent concern among avid juicers. There is a notion out there that juicing liberates antioxidants and nutrients from the inherent food matrix and that blending vegetables will negatively impact the absorption of such substances. Recent studies tend to refute this assertion. A current examination of the topic was published in the June 2009 edition of the journal Plant Foods for Human Nutrition. It describes an experiment which assessed the bioavailibility of polyphenols in the presence of fiber. The conclusion of the pilot study found that the addition of dietary fiber delayed absorption of the antioxidants, but did not prevent them from being utilized. Additional studies reveal that select fiber sources commonly found in fruits and vegetables (pectin) may actually enhance the bioavailibility of plant-based antioxidants without negatively impacting overall nutrient status. (12,13,14)

Fiber serves many valuable functions in the human body. One of the more obvious benefits is in blunting the effects of this fiber-deprived infusion on blood sugar levels. But beyond that, it’s important to be aware of the continually mounting evidence that dietary fiber may also positively influence a broad array of health conditions ranging from slowing the aging process by promoting telomere length to protecting against heavy metal build-up caused by environmental factors. In fact, many seemingly unrelated diseases appear to be affected by the regular consumption of insoluble and soluble fiber including COPD (chronic obstructive pulmonary disease), hormone-related cancers and even fatty liver disease. All of this is to say: don’t throw the fiber away! Drink your juice and eat it too! (15,16,17,18,19,20,21)