Brussels sprouts. You either love them or hate them. My goal today is to provide support to those who already enjoy them and change the minds of the many who don’t. My reason is simple: eating more vegetables from the Brassica family, which includes bok choi, broccoli, cabbage, cauliflower, kale and mustard greens, can assist you in achieving many health goals. How they do so is no mystery. Simply put, they yield a broad array of potent nutrients and phytochemicals that are often lacking in modern diets. 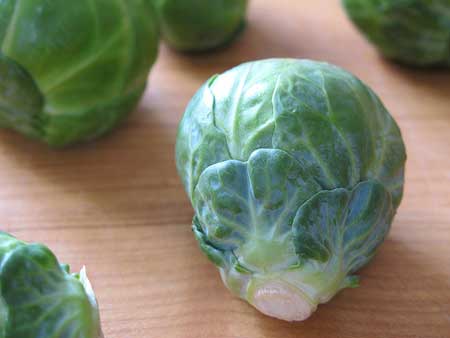 If you ponder the great works of renowned artists such as Beethoven or Shakespeare, it’s quite difficult to narrow down only a few reasons why they’re so well respected. Pointing out the merits of a singular play or symphony doesn’t come close to explaining what makes their achievements and artistry so special. The same is true of cruciferous vegetables. There is so much inherent value in these humble foods that isolating only a few attributes doesn’t seem to do them justice. Nonetheless, this is a task that I must undertake in order to keep the following column from expanding to the length of “Hamlet”.

Brussels sprouts possess naturally occurring chemicals and vitamins which have been shown to interfere with the development of some of the leading causes of morbidity and mortality worldwide. Among the health threats that cruciferous vegetables protect against are colorectal cancer and metabolic syndrome. The latter is a confluence of risk factors such as abdominal obesity, elevated blood sugar and insulin resistance, high blood pressure and cholesterol and systemic inflammation that are associated with cardiovascular disease and diabetes.

Numerous population studies have found a correlation between red meat consumption and colorectal cancer incidence. Among the many proposed reasons for this effect is exposure to carcinogens (heterocyclic aromatic amines or HAAs) which are produced during the cooking of “well-done meat”. Brussels sprouts and other members of the Brassica family have demonstrated an ability to protect the body from the damaging effects of HAAs via two distinct mechanisms: a) the induction of phase II metabolizing enzymes that effectively detoxify carcinogens; b) reducing inflammation in colorectal sites due to the activity of a unique phytochemical known as DIM or 3,3-Diindolylmethane. (1,2,3,4,5)

The micronutrient Vitamin K can be found in abundance in Brussels sprouts. In fact, a half cup serving yields over 130% of the RDA for this essential nutrient which plays a vital role in blood clotting, cardiovascular and skeletal health. In recent years, scientists have expanded their traditional view of what can be expected from plant-based Vitamin K1 or phylloquinone. An examination in the August 2010 issue of the journal Diabetes Care reports that higher consumption of Vitamin K1 is associated with a 19% reduction in type 2 diabetes risk. A 2009 study appearing in the Journal of the American College of Nutrition likewise discovered a 27% lower hazard ratio of metabolic syndrome in young adults based on the highest vs lowest levels of phylloquinone intake. (6,7,8,9,10)

Preheat oven to 375°. Cut Brussels sprouts in half and place aside. Coarse cut the pancetta into small cubes. Add the extra virgin olive oil and pancetta to a frying pan over low-medium heat and allow the fat to render. Smash the cloves of garlic and toss in the pan with the pancetta for a minute or two. Fish out the garlic when it becomes slightly golden, but before it burns. Allow the garlic to cool and then dice it. Set the roasted garlic aside. Remove the pan from the stove. Add Brussels sprouts to the pan and toss with the pancetta. Season to taste with organic black pepper and lightly with salt. Turn the Brussels sprouts and pancetta out on a parchment lined baking sheet. Roast for about 20 minutes, then sprinkle on the garlic and Pecorino Romano cheese. Return the vegetables to the oven for an additional 3 to 5 minutes on a low broil setting until they’re golden brown and crispy.

Roasting vegetables in fat is an excellent way of bringing out the natural sweetness that is often lost when using other cooking preparations. I make a point of mentioning fat because it enhances the absorption of lipid soluble antioxidants contained in many vegetables, most notably carotenoids. The roasting process also allows for the preservation of water soluble nutrients that are frequently lost when boiling. Brussels sprouts are a prime example of a vegetable that you don’t want to boil. Each serving contains a whopping 90% of the recommended daily allowance of Vitamin C – which happens to be water soluble. (11,12,13)

The main reason why so many people avoid this health promoting vegetable at all costs may reside in our very genes. Researchers from the University of Barcelona recently reported the discovery of a gene variant found in select people that may predispose them to avoid foods that contain a bitter chemical known as PTC or phenylthiocarbamide. In the distant past, this perception of bitterness was used to help Neanderthals side step poisonous plants. Fortunately, the opposite appears to be true in the case of cruciferous vegetable. They’re far from poisonous and may very well be a source of protection from actual toxins we all face in the 21st century. If we combine this knowledge with the right cooking technique and seasoning, we can all finally evolve. (14)