The Healthy Fellow test kitchen really lives up to its name. I’m constantly experimenting with different recipes and ways of preparing healthy food. Some of the creations I come up with appear on this site. Others are simply used as part of my personal wellness routine until it occurs to me to post them. Of late, the medical literature has yielded a few tantalizing new studies pertaining to the health attributes of dark chocolate. As it happens, I’m currently in the midst of a hot cocoa revival at home. On more days than not, there’s been a wintry chill in the air and a steaming mug of hot chocolate right by my side. 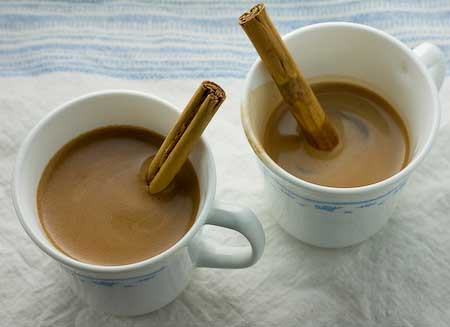 The latest edition of the Nutrition Journal documents a crossover, double blinded, randomized study that compared the effects of a polyphenol rich chocolate beverage to a low polyphenol chocolate drink (placebo). Ten patients with chronic fatigue syndrome (CFS) took part in the experiment. The objective of the research was to determine whether either of the cocoa based candidates would influence subjective measures of CFS over an 8 week period. The primary findings of the study revealed that all indicators of CFS improved only when the participants consumed the polyphenol rich cocoa liquor. Specifically, symptoms relating to anxiety, depression and fatigue responded favorably to the antioxidant laden cocoa beverage, but not the placebo. It’s also worth noting that the experimental drinks were matched for calories and neither of the two resulted in weight gain. (1)

The recipe I use to make my all natural, low carbohydrate hot cocoa is as follows: 2 Tbs of organic (non-alkaline and unsweetened) cocoa powder, a dash of organic cinnamon and instant organic coffee, a sprinkle of NutraSalt or other salt, 8 oz of hot water, 4 oz of Blue Diamond Almond Breeze (unsweetened and vanilla flavored) and 10-15 drops of NuNaturals liquid Vanilla Stevia. Each serving contains a measly 40 calories. It not only tastes great, but also provides an abundance of antioxidants and 4 grams of dietary fiber. Newly published research further reveals that cocoa flavanols acts as prebiotics in the small intestine. Practically speaking, this means that regularly enjoying dark chocolate may support a greater population of healthy bacteria (probiotics) in the digestive system. In addition, the hint of cinnamon makes this version of hot cocoa an excellent candidate for type 2 diabetics. Including just 2 grams of cinnamon a day may lower blood pressure, body mass index, long term blood sugar levels (HbA1c) and waist circumference in as little as 12 weeks. My Healthy Fellow Hot Cocoa Mix is truly an indulgence that you needn’t feel at all guilty about. (2,3)