Garlic is one of the most commonly enjoyed seasonings in modern cuisine. There’s little doubt that many a dish benefits from it. Likewise, the health promoting attributes of garlic have been revered and utilized by civilizations for thousands of years. All that said, the after effects of Allium sativum consumption sometimes leave much to be desired. The reality is that garlic doesn’t just affect breath via the oral cavity. Recent scientific inquiries into this malodorous topic attest to the fact that certain sulfur compounds in garlic such as allyl methyl sulfide (AMS), hydrogen sulfide and methanethiol can also emanate from the gut. But you don’t necessarily need to give up garlic altogether in order to keep your colleagues, friends and mates happy. Before resorting to such extreme measures, you might consider trying out the following natural breath fresheners. 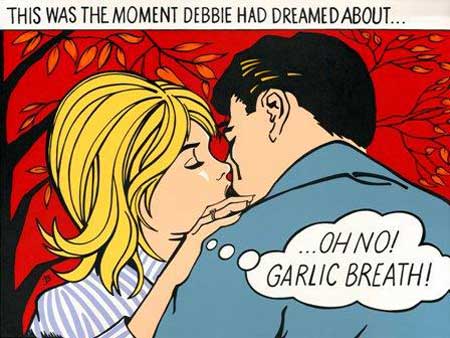 The August 2010 issue of the Journal of Food Science reports that whole milk is an extremely effective means of deodorizing “head-, mouth-, and nose-space concentrations” of garlic-derived aromatics. The combination of fat and water naturally contained in whole milk appears to provide a unique recipe for masking the flavors of garlic when consumed at the same time. Specific testing revealed that a solution of milk protein (casein) plus water or skim milk weren’t as effective as full-fat milk in this regard. Furthermore, mixing garlic in whole milk prior to preparing it in a recipe additionally decreases the risk of lingering garlic breath. (1)

If whole milk isn’t your “cup of tea”, perhaps a cup of green tea might suit you better. Researchers from the University of British Columbia have determined that tea polyphenols are helpful at extinguishing halitosis due to the antimicrobial and deodorant effects. What’s more, the benefits attributed to the phytochemicals in green tea begin working their magic almost immediately after ingestion. It’s interesting to note that in this investigation, the use of a green tea powder was found more effective at taming volatile sulfur compounds than chewing gum, mints and parsley-seed oil. (2)

Sources of Garlic Malodor in the Human Body

A final culinary option worth considering is an ingredient which is sometimes paired in dishes that already contain garlic – button mushrooms or Agaricus bisphorus. Scientists from the Department of Food Science and Technology at the University of California-Davis used “an electronic sensor and sensory evaluation measurement” to determine whether an extract from button mushrooms could nullify the malodor produced after eating garlic. The results of comparative gas chromatography analysis indicates that pungent offenders including allythiols and methanethiols significantly fell after exposure to this mushroom extract. Once again, the polyphenols present appear to be at least partially responsible for the breath benefits. (3)

Combating garlic breath isn’t exactly a priority in the research community and rightfully so. But you and I both know that even the smallest details of day to day life can affect the pleasure we derive from living. Garlic can enhance the flavor of the foods we eat and possibly even support long term wellness via improved cardiovascular health and beyond. Combining the above mentioned foods with dishes containing garlic may be a viable way to allow for the upside of garlic without any self conscious afterthoughts. (4,5)