Propolis isn’t nearly as well known as honey. In fact, it serves no culinary purpose in the human food chain. However, for bees, it plays an essential role in building and maintaining beehives by acting as a glue of sorts. It is also commonly employed as an ingredient in many natural cold and flu remedies. I was recently reminded of this while visiting a number of integrative pharmacies throughout France. But popularity doesn’t necessarily equate to efficacy or safety. One of the questions I sought to answer upon returning to the US was scientific evidence to support the modern and traditional use of bee propolis. 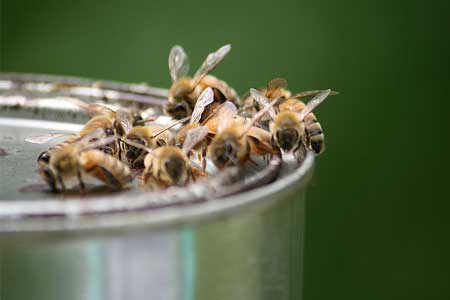 There are a few facts about propolis that are incontrovertible. Propolis is scientifically documented as having germicidal properties. Preliminary research conducted mostly in animal models reveals that select extracts of this bee-derived resin can, in fact, antagonize influenza and various other viral offenders. In vitro testing using human samples goes on to reveal that propolis may also possess immune-enhancing properties that are sparked by causing a temporary inflammatory response. (1,2,3,4,5)

What most researchers and scientists look for when evaluating natural remedies are studies conducted in human populations. Several medical publications on propolis and upper respiratory infections are available for review. The only double-blind, placebo-controlled study I discovered evaluated the preventive effects of a supplement containing a combination of echinacea, propolis and Vitamin C. The 12 week intervention involving 430 young children determined that the youngsters receiving the supplement were 55% less likely to suffer from “illness episodes”. The primary flaw with respect to my line of inquiry is that it’s impossible to know whether the purported benefits are due to the echinacea, propolis or Vitamin C component of the natural medicine in question. It could even be that a synergistic effect accounted for the positive findings. (6)

The remaining studies present new and similar problems when attempting to evaluate them. For instance, a trial from June 2010 reports that a propolis solution can effectively reduce the need for antibiotic treatment in children aged 1 to 5 with chronic ear infections. The product used was well tolerated and lead to a significant reduction in disease recurrence. However, as with the prior mentioned study, the supplement contained another potentially therapeutic ingredient: zinc. Two other published papers document that propolis can: a) safely stimulate the immune system in healthy young adults; b) shorten the duration of common cold symptoms. According to the researchers of the latter study – “In the therapeutic group the symptoms lasted 2.5 times shorter than in the placebo”. Unfortunately, this particular publication only provides a brief overview of the results of the trial. Precise details are not included in the abstract and the full text is in Polish. (7,8,9)

A recent review in the Journal of Ethnopharmacology provides an opinion shared by many integrative health authorities. It states that there is a considerable amount of preliminary evidence suggesting that propolis may affect health in numerous positive ways including activity against allergies, cancer, diabetes, infections and ulcers. But at the moment most of the promise remains in the realm of animal and test tube research. In my opinion, more controlled experiments in humans are needed before any widespread recommendation can be made about the use of propolis in the population at large. There are even scant reports of mild-to-serious side effects that need to be quantified in order to determine the long term safety of this natural remedy. So for the time being, I think I’ll rely on other natural options that have a stronger track record. And I will, of course, keep an eye out for any upcoming data that may change my mind. (10,11,12)