Are you diabetic? I’m not. But I approach my health care as if I were and I think most people should as well. By this, I don’t mean that the majority of you should start popping medications that help manage blood sugar. Far from it. Why do that when you can most likely attain healthy glucose control via exercise, stress management and a whole food diet? That’s the game plan I advocate for most of my clients. However there’s more to supporting diabetic health than simply sustaining optimal blood sugar levels. One of the other pieces of the puzzle involves restoring oxidative balance within the body. Eating or supplementing with foods rich in antioxidants may very well reduce the risk of health threats that are commonly associated with adult-onset diabetes and beyond. 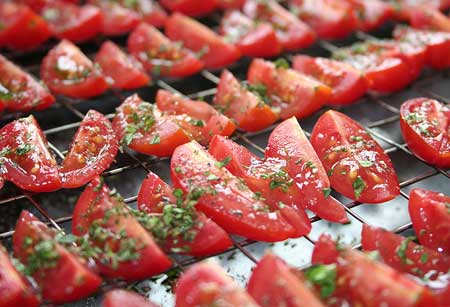 Tomatoes are an abundant source of antioxidant pigments known as carotenoids. In fact, the characteristic red hue is largely brought about by one member of this phytochemical family known as lycopene. Several studies spanning the past few decades are providing clues that eating various tomato-based foods may afford significant cardiovascular support in men and women with type 2 diabetes. This is the most common variety of the disease and is also the most responsive to natural interventions. (1,2,3)

The current edition of the Journal of the Neurological Sciences reports that diabetics with hypertension are 48% more likely to suffer from age-related cognitive changes than those who are normotensive. Fortunately, another publication appearing in the December 2010 issue of the International Journal of Food Sciences and Nutrition reveals that achieving healthy blood pressure may be as simple as eating more tomatoes. The latter paper notes that tomatoes contain nutrients that extend beyond just the antioxidant lycopene. They’re also a good source of beta-carotene (pro-vitamin A), folate, potassium and Vitamins C, E and K. Perhaps that’s why a recent 8 week intervention providing a daily dose of 200 grams of raw tomato resulted in “significant decreases in systolic and diastolic blood pressure” in a group of 32 type 2 diabetics. (4,5)

A summary article in the journal Current Pharmaceutical Biotechnology explains that cardiovascular dysfunction is a leading cause of mortality in type 2 diabetics. An “imbalance between the production of reactive oxygen and nitrogen species (ROS and RNS)” is widely believed to be a contributing factor in the development and progression of this troublesome trend. The consumption of cooked tomatoes is one way to tip the oxidative balance back in your favor. Researchers from the People’s College of Medical Sciences and Research Center in Bhanpur, India have found that long term tomato intake in diabetics results in higher levels of protective antioxidant enzymes and a lower concentration of lipid peroxidation. (6,7)

Another important risk factor in diabetes mellitus is an increased risk of abnormal blood clotting and subsequent atherothrombotic events. A deleterious process referred to as platelet hyperreactivity “plays a pivotal role” in said circulatory abnormalities. Regularly drinking tomato juice may provide a natural and safe means of addressing this health threat. The basis for this statement is a pilot study published in the Journal of the American Medical Association. In it, middle-aged men and women with type 2 diabetes were given 250 ml of tomato juice or a placebo over a 3 week period. The participants in the tomato juice group demonstrated a statistically relevant decline in platelet aggregation by the end of the short trial. No changes in blood sugar control were found in the two study groups. (8,9)

Incorporating tomatoes in your dietary regimen is by no means a panacea for diabetes or any other health condition. Rather, the key to their value has a lot to do with what they offer from a nutritional standpoint. Chief among their attributes is that most tomatoes are relatively low in carbohydrates and rich in fiber and nutrients. They also offer some much needed color to the average diet. Most naturally occurring pigments in whole foods yield protective effects in the human body. Think of the deep greens in spinach, the intense orange of pumpkins or the rich purple spectrum found in wine. The health promoting properties of these foods are partially due to the phytochemicals that form the colors that make them so distinctive. Eating a low glycemic, “rainbow” style diet is one of the most reliable ways of reducing your risk of diabetes and related comorbidities. That’s the advice I give and it’s also the advice I follow myself. (10,11,12)


13 Comments & Updates to “Tomatoes and Diabetes”