The yogurt section in health food stores and super markets isn’t what it used to be. Today there are more varieties of cultured dairy products than ever, without even touching on the multiplicity of flavors available. These days, you can buy yogurts made of cow’s milk, goat’s milk, rice or soy. There is also a wide array of additives or functional ingredients to consider. The options range from soy-based phytosterols which help lower LDL (“bad”) cholesterol to probiotics which support a healthy immune system. However, with greater access to alternatives comes the responsibility of the consumer to discern which products are legitimate and which are just gimmicks. 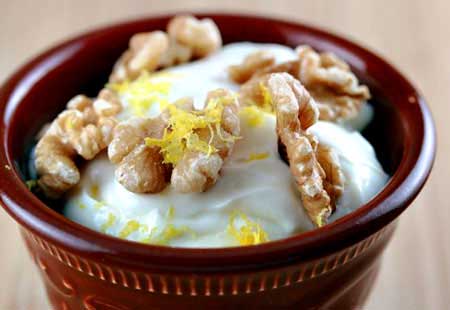 Recent studies in the medical literature offer substantiation for three specific ingredients you may find in your local dairy section. But prior to delving into the actual facts and figures, I want to point out that the base to which these and other ingredients is added is the most important factor in determining the health potential of any yogurt product. The first thing to always look out for is a healthy base yogurt. By this, I mean one that contains live cultures and that is free of artificial ingredients and added sugar.

Many health experts suggest we include more omega-3 rich foods in our diets. Eating fish and flaxseeds are among the most commonly recommended ways of accomplishing this end. As unusual as it may seem, eating certain yogurts may help as well. A new study presented in the journal Nutrition in Clinical Practice found that eating one serving of a fish oil (DHA) enriched yogurt per day for three weeks effectively increased the level of DHA in 12 healthy volunteers. The details of the research point out that the functional yogurt, which contained 600 mg of added DHA per serving, lead to a 32% increase in plasma phospholipid DHA, a 16% rise in total w-3 fatty acids and a significant decline in the pro-inflammatory phospholipid arachidonic acid. (1)

Adding supplemental protein to yogurt may help in the battle against obesity. The March 2010 issue of the British Journal of Nutrition reports that consuming a yogurt-based breakfast that is fortified with protein powder promotes greater calorie burning potential (thermogenesis) while at the same time reducing desire to eat and hunger. The types of protein used in the study were dairy derived: alpha-lactalbumin-enriched whey protein (alpha-lac) and whey protein. (2)

If you happen to see the letters PGX on a carton of yogurt, here’s what it stands for: PolyGlycopleX. In everyday speak, this is basically a very viscous form of fiber which has been shown in clinical studies to balance blood sugar, promote weight loss and reduce lipids. A current publication in the Nutrition Journal reveals that adding 5 grams of PGX to a serving of yogurt can significantly lower the glycemic index (GI) of yogurt. The yogurt in question contained 50 grams of carbohydrates at the starting point. After sprinkling in a packet of PGX, the GI of the sweetened yogurt declined by about 16%. This positive shift in the GI of the product resulted in a meaningful reduction in post-consumption blood sugar levels. (3,4,5)

You can certainly choose to buy commercial yogurt with added functional ingredients in it. Or, you can do what I do: make your own. I start with plain Greek yogurt. This variety of strained yogurt is naturally higher in protein and lower in carbohydrates than conventional forms of cultured dairy. To that, I add a few ounces of organic, raw walnuts. Not only does this add great flavor and texture to the mix, but it also provides valuable fiber, nutrients and omega-3 fatty acids. In addition, numerous studies indicate that regular walnut intake improves cardiovascular health and may even reduce abdominal obesity. Need a little sweet with your yogurt? If so, consider making your own homemade berry jam using organic blueberries, cranberries and strawberries. The recipe for my homemade berry jam couldn’t be easier: Just toss a handful of your preferred berries into a sauce pan and add a small amount of water. Allow the mixture to cook down gently for about 10 minutes. Puree with an immersion blender and cool before using. Add a small amount of liquid stevia for extra sweetness, if desired. Making your own functional yogurt is an inexpensive and simple way to derive all of the health benefits noted above and possibly even more. (6,7,8)