Today I want split up my column. One part will deal with a topic that most people associate with women’s health. The second part will focus on a decidedly male issue. But ultimately, I hope you’ll read both segments of today’s blog. We all need to help inform each other, so help me spread the word. 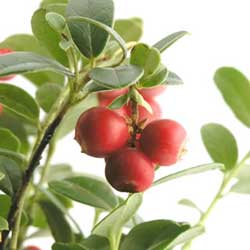 The authors also point out that the cranberry extract would be much cheaper for many of their patients. Another advantage of the cranberry is that it “does not carry the risk of antimicrobial resistance”. This last part refers to a medical problem wherein antibiotics become less effective because bacteria grow less sensitive to them.

If you decide to try cranberry juice, I suggest looking for an unsweetened variety. Unsweetened cranberry juice can be bitter, but there’s a simple way to fix that. Simply dilute the pure juice with some water and sweeten it with a small amount of stevia. There are also many encapsulated cranberry extracts that you can find at health food stores or on the internet.

Note: The study used 500 mg of an extract called Cran-Max. The duration of the trial was six months.

Flaxseeds to the Rescue!

Prostate cancer is a major concern for all men. It’s estimated that one out of every six men will be diagnosed with this form of cancer. So it’s essential to try to find ways to reduce the risk and/or combat it if it’s already present.

One way to nutritionally address prostate cancer is by consuming flaxseeds. Flaxseeds contain substances called lignans which have beneficial effects on the prostate. It’s important to note that most flax seed oil does not contain lignans. The following information specifically refers to ground flaxseeds, not flaxseed oil.

A recent study was done on men who were scheduled to have their cancerous prostates removed. The group was divided into four parts. One part continued to eat their typical diet. The second part of the group was asked to follow a low-fat menu plan. The third part began adding 30 grams a day of ground flaxseeds to their food. And the final part of the group adopted a low-fat diet with added flaxseeds.

When the men’s prostates were analyzed, the results were crystal clear. Both groups that consumed flaxseeds showed a lower rate of proliferation. That means that the growth of cancer significantly slowed down.

Flaxseeds are readily available at most health food stores. I personally suggest getting the whole seeds and grinding them yourself with an electric coffee or spice grinder. This will yield a fresher product and it’s cheaper too. You can also add whole flaxseeds to other healthful ingredients and blend them up into a smoothie or protein shake. The important thing is that the flaxseeds get ground up, one way or another. If you eat the flaxseeds whole, they’ll go right through you without providing the benefit to your prostate.


4 Comments & Updates to “Cranberries and Flax”