When you’re on a gluten-free, low carbohydrate diet you need to be inventive if you hope to have a richly satisfying and varied diet. I follow this type of eating plan because it suits my health better than any other diet I’ve ever tried before. The science supporting the avoidance of gluten, a protein found in many grains, and carbohydrate restriction played a big part in informing my decision. Thankfully, I’ve also created and discovered numerous recipes and products that help make my chosen diet a pleasure instead of a burden. 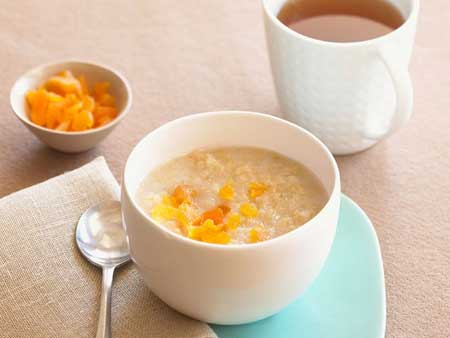 This past week has been particularly chilly in Southern California. One rainy morning, I had a hankering for something comforting and warm to start the day off right. In the days of old that would have meant making some traditional oatmeal topped with banana slices and perhaps a drizzle of pure maple syrup. Of course that’s about as far off of my current menu plan as one could imagine – a veritable carb fiesta.

I know that I’m not the only low carber out there who yearns for hot cereal every now and then. So if you’re like me in this respect, take heart. It is possible to create natural alternatives to cream of wheat and oatmeal using healthier ingredients. Today I’m going to give you a foundation recipe that illustrates exactly how it can be done. For those not following a carbohydrate or gluten restricted diet, consider trying this alternative concoction anyway. What’s presented below can be healthfully incorporated into virtually any style of dietary plan and will almost certainly enhance your nutrient density.

Start by pouring the almond milk and vanilla extract into a quart-sized sauce pot over a low-heat setting. Add the dried spices to the liquid. Combine the almond flour, flax meal and shredded coconut to the pot. Stir continually for the next 3 minutes or so. Put in the dropperful of stevia and a sprinkle of salt to taste. Turn off the heat once the mixture reaches your desired consistency.

The reason I believe this hot cereal is superior can best be explained by citing several recent studies found in the medical literature. The base of my cereal (almonds, coconut and flax seeds) is scientifically shown to: a) lower several established risk factors associated with coronary heart disease including apolipoprotein B100, LDL (“bad”) cholesterol, and total cholesterol; b) protect against oxidative damage to cholesterol and heart mitochondria; c) reduce systemic inflammation in the form of C-reactive protein. Taken collectively, these documented effects point to this as being a highly protective nutritional formula for anyone concerned about heart disease and stroke. (1,2,3)

When preparing this recipe, I suggest you spice it as liberally as your palate allows. The aromatic components included in this dish aren’t just flavor enhancers or window dressing. For instance, allspice, cloves and nutmeg provide health benefits ranging from chemopreventive activity to potent free radical scavenging potential. In practical terms, they may very well protect the body from some of the destructive processes that contribute to health threats including cancer and cardiovascular disease. This humble recipe is yet another example of how we can strategically use food as preventive medicine. (4,5,6)