Physical strength isn’t just a characteristic of athleticism and youth. Rather, it’s something we rely on in order to live the type of lifestyle we choose. It’s not imperative that we look like bodybuilders on Muscle Beach or bikini models in a sports magazine. But, we all hope to have enough power in our muscles to take walks in the park, shop at a sprawling super market and to play catch with our grandchildren. Unfortunately, maintaining lean body mass as we age is not a given. For many, it requires actively railing against the course that nature has plotted. 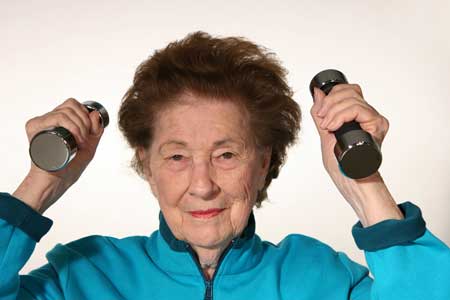 Sarcopenia is a term used to describe age related muscle loss. This process by which the body loses strength is a major contributor to disability and mobility issues that affect seniors throughout the world. The fact is that if you don’t have the ability to move around, illness, in one form or another, is rarely far behind. That is, unless you take every possible step to counter the expected changes that often accompany this “golden age”. (1)

There are several practical steps that may help to protect against the development and progression of sarcopenia. All of these strategies address at least one aspect of this muscular dysfunction and loss of lean body mass.

These results are very hopeful because they indicate that older individuals are still capable of deriving significant benefits from good sources of dietary protein. It’s also helpful to note that excessive amounts of protein are not required to achieve the desired muscle supportive effects in those at risk for sarcopenia. Two other studies from 2009 also recommend similar amounts of protein intake. One medical journal advises “25-30 grams of high quality protein per meal” and the other suggests a minimum of 1.0-1.2 grams of protein per kilogram of body weight. Currently the RDA (Recommended Daily Allowance) for adult protein intake is set at .8 g/kg. (2,3,4)

When the body digests protein, it liberates amino acids from the food source. In short, amino acids are the isolated building blocks of protein. Several recent trials have determined that supplementing with purified amino acids can help increase lean body mass and improve insulin sensitivity in those with sarcopenia. One study even found that amino acids provided superior results when compared to a whey protein supplement. The researchers chose whey protein as a comparison because it’s previously been shown to support muscle growth and is generally easily digested and utilized. (5,6,7)

Use it or lose it. That’s how the saying goes and it’s so very true in the case of sarcopenia. An Italian study from 2008 examined the effects of a “specific resistance training program” consisting of chest press, leg press and vertical row in a group of 20 seniors. Over the course of 18 weeks, they all performed a supervised set of these exercises 3 times per week. Improvements in muscle strength were registered and a particular benefit was found in the lower limbs. This is very important because increased muscular ability in the legs can help reduce falls and fractures that often accompany advancing age. Resistance and strength training not only help to improve muscle mass and performance, but they also appear to restore energy production on a cellular level (in the mitochondria). Mitochondrial dysfunction is believed to be a hallmark of this form of muscle incapacity. (8,9,10)

Elevated levels of inflammatory substances have consistently been detected in those with sarcopenia. Vitamin D is documented as having potent anti-inflammatory activity in a variety of conditions. In addition, this nutrient is frequently found to be deficient in those with poor musculature. Because of these established connections, some researchers have advised raising the “target value” for vitamin D in those at risk for or suffering from sarcopenia. At present, a vitamin D blood level of 40 ng/mL is considered adequate. Certain experts believe that shooting for a goal of 75 ng/mL may be advisable and advantageous as a means of ensuring optimal vitamin D levels. This is yet another inexpensive and safe strategy worth considering. (11,12,13,14,15,16,17,18,19,20)

Other contributing factors such as hormone deficiencies, insulin resistance and inadequate oxygen saturation also seem to exert some influence on sarcopenia. Currently, there are a number of medications under investigation as viable treatments for this growing problem. But the truth is that proper nutrition, specialized exercises and vitamin supplementation can go a long way in influencing just about every known factor relating to this condition. That’s not to say that these natural approaches will always be enough to provide full resolution of symptoms. But what I’m suggesting is that doctors and patients alike at least consider these natural approaches before resigning themselves to potentially dangerous prescriptive options or just allowing nature to take its course. (21,22,23)

Update: December 2010 – A new line of scientific inquiry has recently entered the sarcopenia realm: the role of omega-3 fatty acids in muscle breakdown and production. The September 2010 issue of the Journal of Nutrition started the ball rolling with a report revealing an apparent connection between plasma DHA and EPA levels, n-3 fatty acids found in fish, and the degree of accelerated muscle loss in cancer patients. Now, a new study presented in the December 15th edition of the American Journal of Clinical Nutrition takes it one step further. Scientists from Washington University School of Medicine in St. Louis, Missouri conducted a trial involving 16 healthy older adults who were randomly given either corn oil or fish oil over an 8 week period. The patients receiving the omega-6 laden corn oil did not demonstrate any increase in muscle protein synthesis. However, the fish oil did stimulate the muscle building process. Therefore, it was concluded that omega-3 fatty acids “may be useful for the prevention and treatment of sarcopenia”. Very welcome news indeed. (24,25)


36 Comments & Updates to “Best Of Sarcopenia”