The world of nutrition was rocked this past week by a seemingly innocuous little study. It came in the form of a scientific presentation by Professor Bart Hoebel from the Princeton Department of Psychology. Dr. Hoebel and his team, which included members from the Princeton Neuroscience Institute, revealed findings that suggest that sugar can indeed be addictive.

Now I know that some of you are probably saying, “Tell me something I don’t already know!”.  But in order for the nutritional paradigm to shift, we need scientific support to back our suspicions and our personal experiences. This new research provides that support. 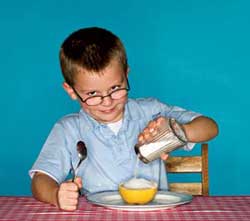 Prior research had established that laboratory animals exhibited the first two elements of addiction. The third element now appeared in a controlled experiment.

The experiment was conducted on lab animals who binged on sugar, then were deprived of it for a prolonged period of time. These animals were then allowed access to sugar once again. The researchers reported that the addicted rats worked harder to gain access to the sugar and noted that they also ate more sugar than before. This indicates a clear pattern of cravings and relapse. Dr. Hoebel summarized this finding by saying, “In this case, abstinence makes the heart grow fonder.”

These findings extend far beyond the arena of sugary foods. One example demonstrated by Hoebel is that rats that binge on sugar undergo changes in their brains that closely resemble the changes associated with cocaine, morphine and nicotine addiction. In addition, it appears that binging on sugar may provoke long-term alteration to the brain that may increase the risk of other forms of substance abuse, like alcoholism.

This is all relevant to us because Dr. Hoebel believes this research may apply to humans as well, in particular to those with eating disorders. But I wonder if his research has even farther reaching implications. According to the most recent figures released by the USDA, Americans consume approximately 180 pounds of sugar a year! And that figure only appears to be growing.