Tune In and Get Healthy

“The mind is its own place and in itself, can make a Heaven of Hell, a Hell of Heaven.” John Milton, Paradise Lost

The placebo effect is probably the best known example of how the mind can aid the body in healing almost miraculously. We believe a fake medication or a treatment will work and our mind somehow facilitates an actual healing event. 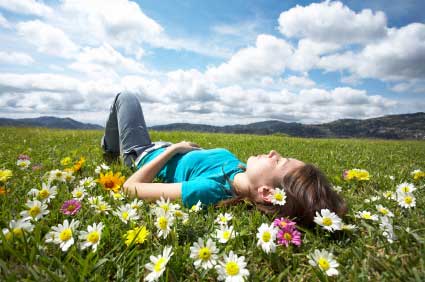 Today, I want to discuss another way in which our minds can help us manage just about any health condition. The modality of today is called guided imagery. And, it can be very powerful according to recent scientific findings.

Guiding Your Way to Less Pain

Fibromyalgia is a chronic pain disorder that affects approximately 2% of the general population. The causes of this condition aren’t well understood and the treatments are often very unpredictable.

Earlier this year a study was conducted at the Virginia Commonwealth University School of Nursing. The aim of the study was to investigate the effects of 10 weeks of relaxation and guided imagery therapy on Fibromyalgia sufferers.

At the end of week 10, there was a significant improvement in the patients management of pain, as well as their functional status (the ability to carry out daily activities).

In England, study of 80 women who underwent conventional treatment for breast cancer was recently published. The treatments included chemotherapy followed by surgery, radiotherapy and hormone treatment. A segment of these women were asked to participate in a relaxation and guided imagery program taught by the hospital. The remainder of the women did not participate in the mind-body exercises.

Over the course of 37 weeks, blood was drawn from all 80 women. The researchers analyzed the blood to check the levels and activity of various cancer-fighting cells.

The results were very encouraging for the mind-body group. There was a positive impact on their immune system (which combats cancer) while they were undergoing treatment and after the treatment ended.

Teaching the Mind to Heal the Body

Interstitial cystitis (IC) is a syndrome that causes pelvic pain and urinary frequency and urgency in over one million men and women in the United States. The authors of a recent study, published in the Journal of Alternative and Complementary Medicine, wanted to find out if a specific guided imagery CD (compact disc) could help to naturally relieve the symptoms associated with this syndrome.

A group of 30 IC sufferers were divided into two groups. 15 of them were asked to listen to a specially made guided imagery CD for twenty-five minutes twice-a-day. The other 15 participants were simply asked to rest for two sessions of the same duration.

The guided imagery CD attempted to focus the listeners’ attention towards “healing the bladder, relaxing the pelvic floor muscles and quieting the nerves specifically involved in IC”. At the end of the 8 week trial, 45% of the guided imagery patients reported a decrease in pain and in urinary urgency. No negative side effect were noted.

In my opinion, all of the studies cited are exciting because they show that we can strategically use our mind as a healing force. I’m also very optimistic because I see examples of mainstream medicine taking note of the potential of such mind-body approaches. For instance, in the beginning of 2008, the Mayo Clinic Health Letter promoted guided imagery as a resource for the following:

We’ve all heard that to be successful in life, we must use our heads. Now, we can add to that: If we want to stay or get healthy, we must also use our heads.