Best Of Apples for Cancer Protection

Sometimes the best way to draw attention to a specific issue is to simply lay out the stark facts and figures. It is estimated that nearly 50,000 people will die in 2009 from colorectal cancer in the United States alone. If you look at the combined incidence of colorectal cancer in both men and women, it is the second leading cause of cancer related mortality. In the US, that means that over 106,000 people will be diagnosed with colon cancer and about 41,000 will learn that they have rectal cancer. What’s more, governmental statistics estimate that the lifetime risk of developing colorectal cancer is about 1 in 19 or 5.3%. These numbers may seem shocking because these forms of cancer simply do not receive as much attention as breast or prostate cancer for instance. But the news about colorectal cancer isn’t all negative. According to the US Centers for Disease Control, the “death rate” from colorectal cancer is on the decline, perhaps due to better screening and removal of pre-cancerous colon polyps. But, as always, I believe the most promising avenue in the field of cancer research involves the safe and judicious use of “preventive medicine”. 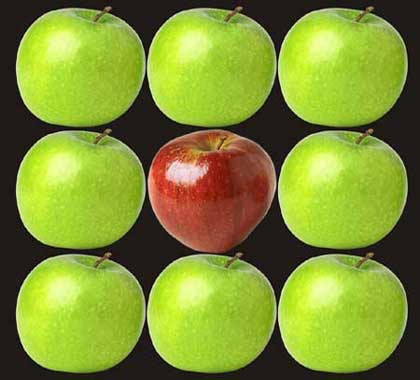 In September 2008, a study was published in the Journal of Agricultural Food Chemistry. It examined the “cellular antioxidant activity of common fruits”. The term “cellular activity” is very important because it doesn’t matter much how a food reacts in laboratory test tubes if it doesn’t have that effect in the human body. Researchers from Cornell University in Ithaca, New York tested “25 fruits commonly consumed in the United States”. Here’s what they found:

Based on these preliminary findings, the authors of the study concluded that, “Increasing fruit consumption is a logical strategy to increase antioxidant intake and decrease oxidative stress and may lead to reduced risk of cancer”. (1)

Other researchers are coming to similar conclusions based on epidemiological or population-based data. For instance, a 2005 population study from Milan, Italy determined that an intake of 1 or more apples a day may reduce the incidence of several cancers – breast cancer (-18%), colorectal cancer (-20%), esophageal cancer (-25%), oral cancer (-21%), ovarian cancer (-15%) and prostate cancer (-9%). (2)

Several recent studies add even more weight to the link between regular apple consumption and colorectal cancer risk. The first was presented in the November 2009 edition of the European Journal of Cancer Prevention. In that research a total of 592 patients with colorectal cancer were compared to 765 volunteers without a history of cancer. Interviews were used to determine differences in diet with a special focus on apple intake. Eating just one apple a day correlated to a 35% reduced risk of colorectal cancer. Eating more than one apple daily reduced the risk by roughly 47%. Another observational study conducted in Poland found a 63% decline in colorectal cancer risk in those eating one or more apple servings per day. As with the previous study, other fruits and vegetables did not appear to confer the same level of protection. (3,4)

One of the most effective means of stemming the tide of colorectal cancer is to limit the number of polyps (growths in the large intestine) which can become malignant over time. This can be accomplished by the identification and removal of polyps via colonoscopy. But it might also be possible to reduce polyp occurrence through dietary support. As such, a recent study entitled “The Polyp Prevention Trial” investigated the effects of a “low-fat, high fiber, high fruit and high vegetable diet” on polyp growth. Careful analysis of the study results indicates that higher intakes of flavonols, such as those found in apples, appear to lower the risk of advanced colorectal cancer. (5)

Apples seem to be such ordinary, simple fruits. But the truth is that they’re actually quite complicated if viewed on a chemical level. A recent review of the apple peels of Red Delicious apples discovered 29 compounds with antioxidant and cancer-fighting (antiproliferative) properties. Natural phytochemicals with names such as D-glucaric acid, hydroxycinnamic acids, oligomeric procyanidins, phloretin, and triterpenoids are likely responsible for preventing mutations in normal cells, promoting the demise of cancerous growths and limiting the likelihood of metastasis (cancer spread). There is even evidence that apple polyphenols can support the body’s ability to detoxify and thusly protect against “chemically induced colon carcinogenesis”. (6,7,8,9,10,11,12,13)

A brand new experiment published in December 2009 points to yet another avenue by which apples may foil cancer formation in the colon and rectum – via the selective promotion of healthy bacteria in the colon. An experiment from the New Zealand Institute for Crop & Food Research discovered that apple extracts enhanced the growth of several probiotics (healthy bacteria): Lactobacillus reuteri, Lactobacillus rhamnosus and Bifidobacteria lactis. At the same time, apples also inhibited the growth of two pathogenic (disease producing) bacteria: Escherichia coli 0157:H7 and Escherichia coli LF82. A separate experiment from Hungary determined that carotenoids found in the skins of Golden Delicious apples could combat another common pathogen, H. pylori. The relevance is that harmful bacteria and a lack of healthful bacteria have been associated with an increased risk of intestinal inflammation and associated malignancies. (14,15,16,17)

When selecting apples, keep in mind that newer varieties, including Ozark Gold, Julyred and Jester apples are generally as healthful as the more familiar apple types (Golden Delicious, Idared, Jonagold, etc.). I suggest opting for organic apples when possible because their conventional counterparts tend to be a rich source of unwanted pesticides. In addition, many of the most potent phytochemicals found in apples are present in the skin. Choosing organic apples will allow you to eat the skin without the added risk of consuming as many as 42 different pesticide residues. Another upside to eating organic apples is that some research indicates that they often contain greater quantities of the highly desirable polyphenolic antioxidants. (18,19,20,21,22)

Apples are not only a rich source of dietary antioxidants, but also relatively gentle on your blood sugar levels. They’re generally classified as both low glycemic (with a GI of ~ 38) and having a low glycemic load (a GL of 3). There are even some sugar-free apple polyphenol supplements currently available at health food stores and online. Perhaps the ideal way to use apples is as a replacement for other “less-than-healthy” food in your diet. If you’re accustomed to eating a bag of chips or crackers and cheese as a snack, consider eating an apple instead. An apple and cheese or an apple with nut butter would be even better. Come to think of it, I recall seeing Phil Ivey regularly eating an apple during the 2009 World Series of Poker. He’s widely regarded as one of the finest poker players in the world. Maybe we’ve been reading some of the the same research?

Update: January 2010 – The latest research on the apple-cancer link suggests that eating apples that are unpeeled is the best way to go. Current studies using apple peel extracts reveal potent activity against a variety of cancer cells and even a bacterium (H. pylori) that is associated with the development of gastric cancer. In addition to direct anti-cancer activity, polyphenolic apple extracts may also protect against the development of malignancies by reducing DNA damage. Another benefit of apple skins is that they contain an abundance of antioxidants and more naturally occurring fiber than is found in the fruit. But it’s not all good news when it comes to eating apples whole. Conventionally grown apples generally contain high levels of pesticide residues. Predictably, many of these undesirable chemicals are present on the surface of the fruit. Fortunately, this complication can be largely avoided by selecting organically grown apples. As a bonus, apples grown organically may contain higher levels of protective phytochemicals (dihydrochalcones, hydroxycinnamic acids, flavanols, quercetins and total phenolics) than the conventionally grown variety. (23,24,25,26,27,28,29)


5 Comments & Updates to “Best Of Apples for Cancer Protection”