As a child of two Italian parents, I can tell you that one of the most difficult dietary changes I’ve made is to eliminate pasta from my life. The one thing that capellini, fettuccine, linguine and spaghetti all have in common is that they’re traditionally made from wheat flour. That, in and of itself, excludes them from my menu plan. Even reduced-carbohydrate pastas and countless others don’t work for me because they typically contain gluten – a protein found in grains that can provoke allergic reactions and other health consequences. But rather than give up on pasta altogether, I’ve opted to rediscover it in a slightly different form. 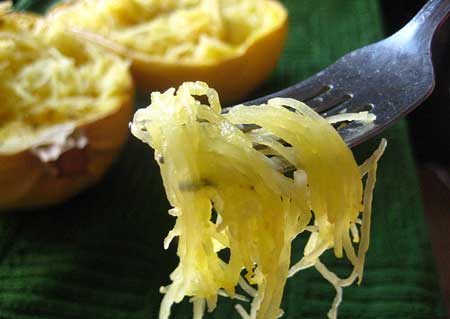 No matter what type of diet you’re on, calories matter to some extent. Spaghetti squash is an excellent way to reduce the caloric content of a pasta dish. In fact, a one cup serving of cooked Cucurbita pepo only contains about 40 calories. The carbohydrate count is also quite reasonable at 10 grams per cup. Two grams of the total carbohydrates are calculated as dietary fiber. Perhaps more importantly, the estimated “glycemic load” of spaghetti squash is only 2. This means that it has a negligible impact on blood sugar and insulin production. But there’s yet another reason to reach for squash instead of wheat-based pasta: it gets its yellow color from important dietary antioxidants known as carotenoids. These pigments provide health benefits ranging from the promotion of cardiovascular health to more attractive looking skin. (1,2,3,4,5)

Preheat the oven to 400°F. Cut the spaghetti squash in half lengthwise. Scoop out the seeds. Spray both sides of the exposed flesh of the squash with olive oil. Season cut squash with black pepper, salt or salt-substitute to taste. Place the squash halves cut-side down onto a baking sheet lined with parchment paper. Bake for 45 minutes. Allow to cool, then run a fork through the “meat” of the squash from end to end to remove the strands that will look like capellini or thin spaghetti. Place the squash “pasta” into a fine mesh strainer and drain for about 15 minutes. Shake out any excess moisture prior to dressing the spaghetti squash.

While the squash drains, add a combination of organic butter and olive oil to a saute pan over low-medium heat. Grate one clove of garlic (or more if you like) into the butter and oil using a mircoplane. If you don’t have this kitchen utensil, finely dice the garlic instead. Add the desired amount of spaghetti squash to the saute pan with the garlic butter/oil and heat it through for several minutes. Salt and pepper to taste, and add the red pepper flakes (if you like some heat). Just prior to serving, sprinkle with grated Parmesan cheese.

While researching today’s column I came across a rather curious finding. It seems that food scientists from around the world are hard at work trying to discover new ways to improve the health effects of pasta. The goal is to make the much beloved, conventional pasta into a more nutritious dish. A few of the techniques they’re experimenting with include: a) adding unripened banana flour, a rich source of resistant/indigestible starch to the wheat flour; b) fortifying semolina pasta with legumes such as chickpeas, mung beans, red lentils and soybeans – in order to increase the pasta’s protein quality; c) adding a special white bean extract (Phaseolus vulgaris) to help limit the digestion of the starch via the inhibition of the enzyme alpha-amylase. (6,7,8)

When it comes to improving upon a dish, I prefer a much more direct route. By exchanging wheat based spaghetti for spaghetti squash, we replace a source of refined grains with a nutritious vegetable that is considerably lower in carbohydrates. Admittedly, the mouth feel and texture aren’t identical to the original. But, in our household we’ve found that spaghetti squash “pasta” makes a winning meal or snack whether it’s prepared quite simply, as in the recipe above, or paired with a tomato sauce, turkey meatballs and Peccorino Romano cheese. Ultimately the most important difference you’re likely to find is how this re-imagined Italian classic makes you feel. It’s lighter than the original and helps you to meet your daily vegetable quota. That’s something that you just can’t say about conventional pasta.