This past weekend I was catching up with my parents. They mentioned that they had attended a women’s health seminar hosted by a local physician. One of the points made by this particular speaker was that calcium supplements should never be taken with coffee. She went on to explain that coffee impairs the absorption of this essential mineral and could be counterproductive for anyone attempting to support bone mineral density. Since calcium supplements and coffee are prevalently used these days, I decided to take a look at what the medical literature has to say about this timely topic. 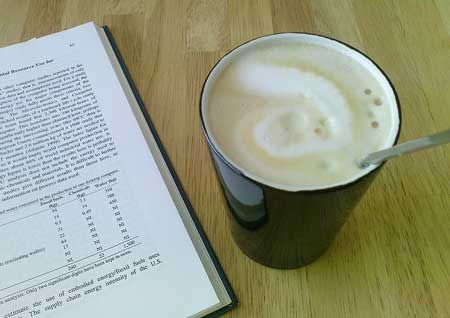 It comes as no surprise to me that I’m not the first person to address this issue. When I looked at a variety of medical and nutritional resources, I found various points of view about the wisdom of consuming coffee in relation to fracture and osteoporosis risk. In many instances, the opinions expressed appeared to be tinged by the overall philosophy that the authors held. Some sources, who discourage coffee use in general, emphasized the worst case scenario. Those with a financial stake in the sale of coffee predictably downplayed the potential for harm. Most mainstream authorities typically aligned themselves with a middle of the road position: moderation is the key to all things. Given this reality, I think it’s only fair to share my own bias. I’m a coffee drinker and I often promote the health benefits of this traditional beverage. But I also try to balance my reporting about coffee with information about risks that may accompany regular use.

The best study to date relating to coffee and calcium absorption was published 12 years ago in the obscure journal Isotopes in Environmental and Health Studies. The experiment in question evaluated the relative intestinal absorption of calcium coming from three distinct sources: a) 500 ml or about 17 oz of fresh milk; b) a test meal comprised of “250 g curd, 150 g yogurt, 2 slices of pineapple, 2 breakfast rolls, 2 cups of coffee, 10 g of coffee cream, 20 g butter, 50 g jam and 20 g honey”; c) a calcium supplement (lactogluconate). All three of the calcium sources were administered to 8 healthy, middle-aged volunteers on separate occasions and on an empty stomach. The findings of this unique trial revealed that the calcium supplement was absorbed best (28.7% absorbed fractions), the fresh milk registered at 24% and the test meal at 17.9%. (1)

Before we jump to any conclusions about the impact of coffee on calcium absorption based on the prior study, consider this: A Belgian trial published in 1996 examined the influence of various food components (coffee, pectin, Vitamin C and wheat bran) on mineral absorption. The minerals that were examined in this experiment were calcium, iron and zinc. Vitamin C was deemed the only positive influence on mineral bioavailability. Of the three remaining food elements, wheat bran was found to have the most detrimental effect on mineral absorption. (2)

There’s also the issue of caffeine and/or coffee and overall “calcium economy” – a term that quantifies the impact of caffeine and/or caffeinated coffee on calcium balance in the body. According to the research, the bottom line here is that one should consume slightly more calcium (~40 mg) for every cup of caffeinated coffee you drink. This alone can be accomplished quite simply by adding a dash of milk or milk substitute to each cup of java. In our home this means pouring in a few ounces of fortified, unsweetened almond milk. (3,4,5)

All of this is not to say that high coffee consumption never poses negative consequences on bone structure or fracture risk. Certain genotypes, such as “rapid metabolizers” of caffeine may need to be more mindful of the effects of caffeinated coffee on bone mineral density. In my review of the most recent publications pertaining to this controversial topic, I found a number of papers indicating that high coffee intake may increase the risk of osteoporosis in select populations. This is especially true in women with a calcium intake of less than 700 mg/day. But it’s also important to note that some other epidemiological examinations reveal very different outcomes ranging from a mild protective effect to no influence at all in relation to coffee use and skeletal health. (6,7,8,9,10,11,12)

Something that’s rarely discussed in the calcium-coffee debate is the role that homocysteine plays in the global picture. Elevated homocysteine, an amino acid found in the blood, is associated with a greater risk of fractures and osteoporosis. Some research estimates that regular coffee consumption may raise homocysteine levels by up to 20%. The mechanism behind this phenomenon likely has to do with a reduction in the circulating levels of vital nutrients, including folic acid and Vitamin B12. A diet rich in B-vitamins and B-vitamin supplements are considered to be the first-line treatment for elevated homocysteine. (13,14,15,16,17,18,19)

Based upon the data that I’ve uncovered, my suggestion is as follows: If you drink coffee, make sure to consume optimal levels of calcium via diet and supplementation. Taking calcium supplements apart from coffee probably aids in absorption. But it’s not absolutely essential that you drink milk or supplement with calcium on an empty stomach. Just make sure to compensate for the reduced bioavailability that accompanies meals and snacks containing a variety of foods including coffee, fiber-rich fruits and vegetables and whole grains. Last but not least, I think it’s a good idea to supplement with extra B-vitamins or a high-potency multivitamin/mineral supplement if you drink multiple cups of coffee daily. These added considerations are well worth the effort. What’s more, they may just allow you to derive the numerous health benefits and pleasure of drinking coffee without putting you at unnecessary risk for fractures and osteoporosis.