Just because something seems simple doesn’t necessarily make it so. This is a stumbling block that I often see conventional scientists run into when discussing alternative or complementary therapies. How can everyday food possibly be as effective as a medication that’s taken millions of dollars and countless MDs and PhDs to create? Laughter is an enjoyable activity, but it can’t possibly improve cardiovascular health or survival in cancer patients. The very notion that supposedly un-serious activities such as artistic expression, listening to music or practicing generosity and kindness can alter one’s physiology is a difficult pill to swallow for many allopathically minded researchers. 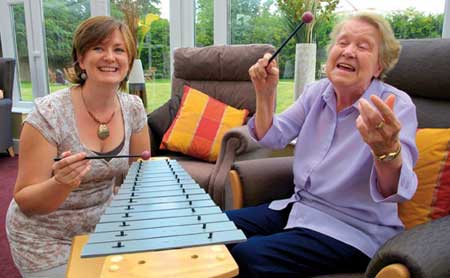 Fortunately, some researchers are taking the study of mind-body medicine very seriously. One of the most intriguing examples is in the field of music therapy. A recent report from the Department of Psychology at the University of Sussex methodically elucidates how sounds can literally alter the makeup of the body and mind. According to the review, the extent to which music touches human beings is quite broad and profound. The paper describes it thusly: “music engages sensory processes, attention, memory-related processes, perception-action mediation, multi-sensory integration, activity changes in core areas of emotional processing, processing of musical syntax and musical meaning, and social cognition”. In order to illustrate how some of these concepts apply in the real world, I’ve compiled several relevant studies that have been published recently in the scientific literature. (1)

There’s still a lot to learn about how exactly to best utilize music in the healing arts. A recent Chinese study set out to prove that happy melodies would reduce pain more efficiently than sad music. The only problem is that the results of the trial didn’t support the original hypothesis! What the researchers determined instead is that the valence or perceived attractiveness of the music was the determining factor in pain relieving potential. This could conceivably open the door for doctors and psychiatrists to prescribe music much like they would medications – based on an individual’s personal needs and preferences. (10)

I’m certain that there’s going to be a multitude of new research on music therapy in the years to come. But what’s equally important to consider is how music is perceived by those who are being exposed to it. One of the finest things about music therapy is that it is generally welcomed by those who need it most. A recent report in the journal Complementary Therapies in Medicine asked “17 wheelchair bound elderly residents” about their impression of group music therapy. The men and women collectively stated that music provided them with added strength and enhanced their quality of life. They went on to remark that the inclusion of music inspired them to exercise and learn more and, perhaps as importantly, added variety and greater satisfaction to their lives. These are the type of statements that are rarely uttered with regard to conventional medical care. My hope is that the modern medical paradigm will soon incorporate more music into its institutes of healing. When they do, I believe that more actual healing of the body and mind will occur. (11)

Update: February 2011 – Scientists the world over have embraced the concept of using music as a viable therapy. This fact is evidenced by the sheer number of current publications appearing in the medical literature. Here’s a brief description of five new studies that illustrate the potential health benefits of arranging, listening to and/or performing music.   1) Daily exposure to a specific sonata by Mozart (K.448) for 6 months reduced the frequency of seizures in children with refractory epilepsy. 2) Children who created and used a music therapy CD while undergoing cancer treatment (radiation therapy) were found to cope with treatment significantly better than those in a “control” group. Success was measured by a reduced tendency to withdraw socially as a coping mechanism. 3) A new trial conducted in Turkey reports that the use of pain-relieving medication during pregnancy can be decreased if music therapy is administered staring one-hour after delivery/surgery. 4) According to researchers from Singapore, elderly patients with dementia demonstrated profound improvements in quality of life when they engage in a “weekly structured music therapy and activity program” as assessed by two scales: Apparent Emotion Scale (AES) and Revised Memory and Behavioral Problems Checklist (RMBPC). 5) The addition of relaxing music before bedtime effectively and safely improves emotional measures (reduced depression and “situational anxiety”) and sleep quality in patients with schizophrenia. This collection of data clearly indicates that many seemingly disparate medical conditions can be improved with the implementation of music therapy. (12,13,14,15,16)