In “Black Swan”, the Academy Award nominated film, there’s a scene where a ballet dancer, played by Natalie Portman, sits in front of a half grapefruit for breakfast. That grapefruit is a reminder of how dietary trends tend to stick around in one incarnation or another. In the 1970’s, The Grapefruit Diet was one of the most popular weight loss programs around. Some forty years later, you can still find articles, books and even nutritional supplements that feature grapefruit as some sort of weight loss wonder worker. Today’s column examines the actual research behind the weight loss claims involving this citrus fruit. 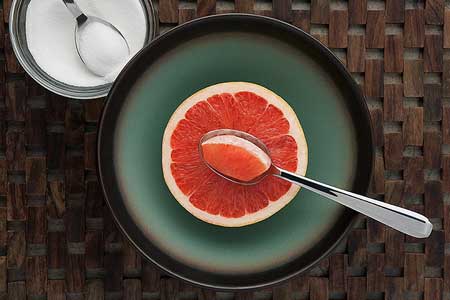 Scientists rarely devote energy and time to research that is obviously far-fetched. If a new diet claimed that eating 10,000 calories a day of fast food resulted in weight loss, no serious academic would attempt to raise money to investigate this outrageous assertion. Using grapefruits as a weight loss aid doesn’t fall into this category. Grapefruits are widely accepted as low in calories and rich in antioxidants (limonoids, naringin, phenols) and nutrients (potassium, Vitamin C). Apart from the very real possibility of drug-interactions, they’re considered a health promoting food. (1,2,3,4,5,6,7)

A few theories have emerged about how grapefruit and its components may affect metabolism and weight management. A paper published in the January 2011 edition of the journal Chemico-Biological Interactions postulates that a diet rich in polyphenols, including grapefruit, may discourage a bacterial imbalance in the gut which may, in turn, discourage the expression of genes that promote obesity. Preliminary studies in animal models, in vitro and in human subjects are beginning to support this notion. A Japanese trial from August 2010 determined that a constituent of grapefruit, nootkatone, effectively reduced abdominal fat accumulation and body weight gain in a group of mice fed an unhealthy diet. This particular grapefruit extract also improved physical endurance and lowered blood sugar, insulin and leptin levels. Finally, a citrus extract derived from grapefruit, orange and red orange (Sinetrol) exhibited the ability to breakdown body fat in a test tube environment and promoted significant body fat and weight loss over a 12 week period in a pilot study involving twenty human volunteers. (8,9,10) 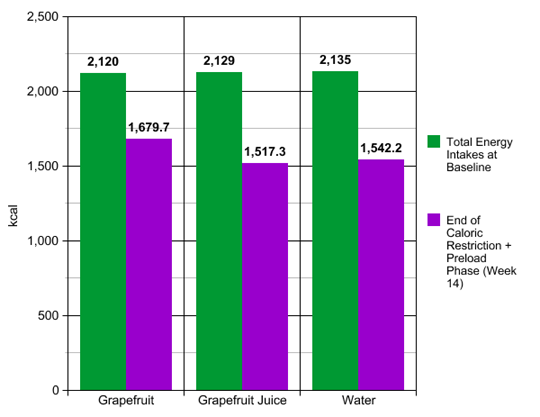 Thus far, the most definitive study published on this topic appears in this month’s issue of the journal Nutrition and Metabolism. In it, eighty-five obese men and women were randomly administered a serving of grapefruit, grapefruit juice or water prior to meals over a 12 week period *. The results indicate that all three “preloading” strategies resulted in a reduction of daily caloric intake of between 20% to 29%. This decline in energy consumption lead to a 7.1% weight loss and meaningful reductions in body fat and weight circumference. But it’s also important to note that there were no statistically relevant differences found between the groups. In other words, the participants who preloaded with water demonstrated similar weight loss to those drinking grapefruit juice or eating grapefruits. However, the authors of the trial did report a non-weight related finding that could impact overall health: both grapefruit groups exhibited an increase in levels of protective HDL cholesterol (+6.2% in the grapefruit eaters; +8.2% in the grapefruit juice drinkers). (11)

Note: The three groups of study volunteers began the intervention by adopting a “two-week caloric restriction phase”. That’s why the graph above is based on 14 weeks worth of data.

This newly published study is unlikely to affect the vacillating popularity of grapefruit as a weight loss aid. Some will cling to anecdotal testimonials from celebrities, colleagues and friends. Others will cite a study published in 2006 that determined that drinking grapefruit juice, eating half a grapefruit or taking grapefruit capsules (3 times/day) lead to “significant weight loss”. But keep in mind that the study in question, performed at the prestigious Scripps Clinic, only registered weight loss of about 3 lbs over a 12 week period. This isn’t exactly impressive in my book. On the other hand, an improvement in insulin resistance was also noted in the study volunteers who were all classified as having metabolic syndrome and obese. This alone is of value from the perspective of cardiovascular disease and diabetes prevention. Perhaps that’s the ultimate point that’s being made here: grapefruit is unlikely to promote meaningful weight loss as a solitary strategy. At the same time, it may afford some health benefits and maybe, just maybe, tip the scales ever so slightly in your favor in the battle of the bulge. (12)