Bipolar disorder has been in the news lately because of the incessant coverage of a well known celebrity who appears to be in the midst of a mental breakdown. News outlets of every stripe just can’t get enough of this story. It doesn’t much matter whether the root cause of this current spectacle is drug use, a psychiatric condition or some combination thereof. The bottom line is that the antics involved are simply too sensational to ignore. But that’s not the reason why bipolar disorder is on my radar. Please don’t get me wrong – the psychological unraveling of any person is profoundly sad and troubling. However, when over 2% of the world’s population is affected by one form or another of bipolar spectrum disorder (BPS), that fact should occupy a much more prominent spot in the news than the struggle of any one individual. 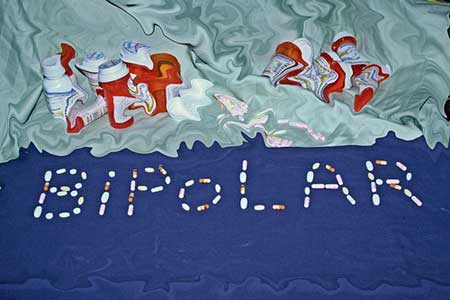 Bipolar disorder is characterized by mood swings ranging from severe depression to manic highs. The cycling of these symptoms varies and, in some instances, both low mood and euphoria can co-exist. Severity too presents itself in a spectrum of intensity from the most debilitating classification, bipolar I disorder, to milder forms such as cyclothymia.

The latest edition of the journal Archives of General Psychiatry is the bearer of the stark statistics I mentioned in the opening paragraph. The 2.4% bipolar incidence rate is based on an evaluation of 61,392 adults in 11 countries. What’s even more disturbing to note is that fewer than half of those with bipolar disorder will receive mental health care during the course of their illness. That fact becomes even harder to swallow when you consider that roughly three-quarters of those with BPS also contend with comorbidities such as anxiety and panic disorders. (1,2)

The good news is that there are a number of complementary practices and nutritional supplements that may be of value to those living with bipolar disorder. Before I describe them, I want to emphasize that the following adjunctive options are not an alternative to professional care. Anyone who exhibits signs of or suspects that they may be dealing with a manic depressive mindset needs to seek the guidance of a trained mental health professional, at which point, alternative treatment modalities can be considered and implemented when appropriate.

The August 2010 issue of the journal Psychological Medicine features a systematic review of the “current evidence on the neurobiological changes and clinical benefits related to mindfulness meditation practice in psychiatric disorders”. The authors of the piece, based at the Institute of Psychiatry at the University of Bologna, Italy, report that Mindfulness Based Cognitive Therapy (MBCT) has shown promise in “reducing relapses of depression in patients with three or more episodes”. MBCT is a relatively new mind-body therapy that combines elements of cognitive behavioral therapy with mindfulness meditation. Two peer-reviewed trials from 2010 and 2008 indicate that MBCT can reduce the severity of anxiety and depressive symptoms in those with bipolar disorder. At least two additional studies are currently underway to test and verify this promising line of research. (3,4,5,6,7)

Omega-3 fatty acids, such as those found in flax seed oil and fish oil, may likewise be of value to adults and children with BPS. A trial published in March 2010 examined the impact of giving up to 12 grams/day of flax oil or olive oil to 51 adolescents and children with “symptomatic bipolar I or bipolar II disorder”. At first, the results seemed rather underwhelming. On average, those receiving flax oil did not exhibit significant improvement in depressive symptoms as compared to the placebo (olive oil) group. However, upon a more methodical analysis, the researchers found that patients who efficiently converted an omega-3 fatty acid in flax (alpha linolenic acid) into a more usable form (EPA) demonstrated a decrease in illness severity. This finding may explain why several previous trials using fish oil reported much more promising results. EPA or eicosapentaenoic acid is one of the main omega-3 fatty acids contained in fish oil. What’s more, a recent meta-analysis presented in the Journal of the American College of Nutrition specifically singles out EPA as the primary fatty acid responsible for the antidepressant properties of fish oil. (8,9,10,11,12)

Case reports are considered one of the least reliable forms of medical evidence. They detail specific findings in an individual patient that may be a fluke or could possibly have implications for other patients or even the population at large. This is why prestigious medical journals sometimes accept case histories for publication. In rare instances the medical literature will go so far as to present multiple case reports about a given substance. A micronutrient supplement by the name of EMPowerplus falls into this unusual category. The product itself contains 36 familiar ingredients which are mostly comprised of well known minerals and vitamins. A database analysis in the September 2010 issue of the journal BMC Psychiatry describes the most compelling evidence to date about EMPowerplus. In the open label analysis, a group of 120 adolescents and children with bipolar disorder were evaluated with respect to their response to EMPowerplus supplementation. A total of 46% of the young subjects responded to the treatment as assessed by a 50% or more reduction in symptom severity. Medication use among these “responders” also dropped by 52% over the 3 to 6 month evaluation period. It’s interesting to note that attention deficit hyperactivity disorder (ADHD) symptoms also diminished in the youngsters regardless of age or gender. But, no matter how promising these findings appear to be, the authors of the paper are quick to point out that controlled, scientific studies are still needed to verify the initial promise of the published case studies and this database analysis. (13,14,15)

The current edition of the Journal of Affective Disorders provides clues about why dietary improvement and nutritional supplements may be of value to those with bipolar disorder. Researchers from the University of Melbourne, Australia delved into the topic of diet quality in healthy women and those with BPS. They discovered a distinct dietary pattern that dramatically raised the likelihood of being bipolar: eating foods with a higher glycemic load that are typically associated with “modern” or “western” dietary habits. In contrast, women who ate a more “traditional” diet were 47% less likely to be bipolar. Not only does this imply that a diet rich in carbohydrates and processed foods contributes to poor mental health, but it also suggests that eating a traditional, whole food based diet may afford some degree of protection. (16)

In order to truly embrace the concept of holism, I make it a point to look for the unintended consequences of embracing any given treatment. When I consider the three natural health candidates described today, it seems highly unlikely to me that their use would cause harm. Fish oil, meditation and multivitamin-minerals are hardly common health hazards when applied judiciously. But beyond that, I think all three also hold promise in addressing some of the medical issues that often go hand-in-hand with bipolar disorder. Specialists in the field of cardiology and psychiatry have long noted that bipolar patients frequently exhibit “excess cardiovascular risk”. All three of the alternatives mentioned today are documented as agents that can lower the risk of heart disease. This is yet another reason to consider an integrative treatment strategy even, or especially, when dealing with serious mental health concerns. (17,18,19,20,21)