Aerobic interval training is by far my favorite form of cardiovascular exercise. It doesn’t matter if I’m on a treadmill, in the gym or walking on the beach. I could be alone or training a group of clients. The bottom line is that if I’m working out, part of my routine is almost certainly composed of walking at variable inclines and speeds. That’s essentially what aerobic interval training (AIT) is. Instead of walking at a constant pace for prolonged periods of time, you simply push yourself to walk faster/harder for shorter intervals followed by less intense intervals in between. 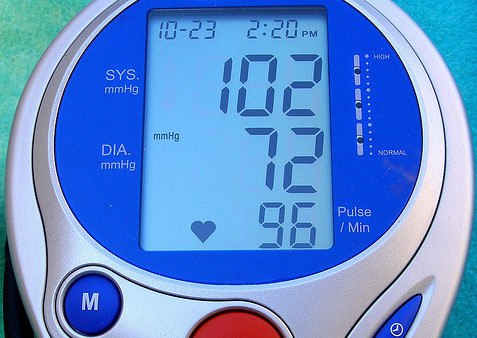 According to a recent review by the Mayo Clinic, AIT confers certain unique health benefits when compared to more conventional forms of exercise. Chief among the evidence-based claims made by the Clinic staff are the following incentives: 1) it will help you burn more calories; 2) it can improve aerobic capacity; 3) it minimizes muscle soreness by discouraging the “buildup of waste products in your muscles” and; 4) it makes your workout less boring and monotonous. (1)

The impact of cardiovascular disease on the population at large is nearly incalculable. The likelihood of living a long life without encountering some heart-related health issue is exceedingly uncommon in the 21st century. And when the day comes that you are diagnosed with high blood pressure, high cholesterol or some degree of arterial blockage, the march toward putting you on medications to address these risk factors will likely begin. As it so happens, aerobic interval training appears to be a valuable tool in forestalling various forms of cardiovascular damage and dysfunction and may even serve to prevent the development of heart disease in the first place.

A powerful new study appearing in the European Journal of Cardiovascular Prevention & Rehabilitation compared the effects of AIT vs. “isocaloric moderate intensity continuous training” or MIT in a group of 88 patients with essential hypertension. All of the study participants took part in three sessions of treadmill walking per week for a total of 12 weeks. The findings of the trial were nothing short of stunning:

Other measures of aerobic capacity and cardiovascular health including VO(2max) or maximal oxygen uptake and flow mediated dilation were primarily evident in the AIT participants. The authors of the experiment concluded that, “This study indicates that the blood pressure reducing effect of exercise in essential hypertension is intensity dependent. Aerobic interval training is an effective method to lower blood pressure and improve other cardiovascular risk factors.” (2)

The prospect of preventing heart disease in at-risk populations is at least as exciting a concept to me as treating it naturally. Several recent interventions have established that the regular practice of aerobic interval training can reverse the trend toward cardiovascular damage in obese adolescents and young adults. In fact, when out-of-shape youth stick with an AIT regime for 3 months or more, it tends to restore diastolic and systolic cardiac function to a level expected in their lean counterparts. What’s more, some of the positive studies have only demanded an exercise regiment of 2-3 times weekly. As a bonus, overweight adolescents in the AIT clinical trials lost more body fat and weight, and exhibited other positive health shifts, such as a greater decline in blood sugar and insulin in comparison to other forms of exercise. (3,4,5)

Older men and women should also take heart: aerobic interval training isn’t just a “sport” for elite athletes and grandchildren. Please don’t assume that just because you’re currently inactive that this form of exercise is not for you. I would argue that the opposite is often true. A publication in the March 2011 edition of the British Journal of Sports Medicine illustrates my point. In it, researchers from the Shinshu University Graduate School of Medicine in Japan explain that seniors who took part in “interval walking training” found numerous health benefits ranging from an improvement in muscle strength to an increase in HDL (“good”) cholesterol. But what’s equally important to note is that the older subjects who were considered in the poorest physical shape demonstrated the greatest gains in various health parameters. Other studies suggest that the advancements in physical health and well being in seniors become apparent even after short-term AIT trials lasting only 9 weeks. (6,7,8)

The Differing Effects of Aerobic, Strength and Combination Training 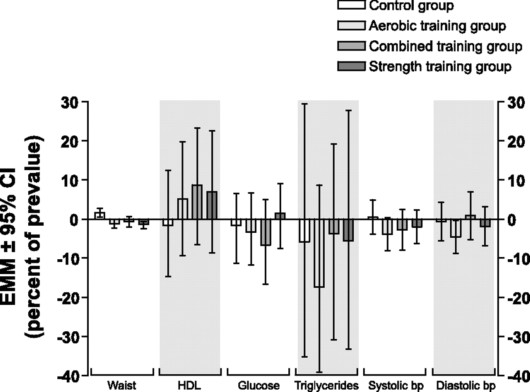 Metabolic syndrome (MetS) is characterized by a set of risk factors including abdominal obesity, elevated triglycerides, high blood sugar, hypertension and low HDL (“good”) cholesterol. It is sometimes referred to as “pre-diabetes” and “pre-heart disease”. Twelve weeks of AIT and/or a combination of AIT plus strength training has been shown to enhance circulation via an improvement in endothelial function and lower waist circumference in those with metabolic syndrome. Research out of the Norwegian University of Science and Technology recently delved even deeper by documenting changes that occur on a cellular level in MetS patients who engage in AIT. Their findings state that, “Increased transcription of genes involved in steroid hormone-mediated signaling, decreased levels of arginase-1, and reduced transcription of genes involved in cell adhesion, and blood clotting are likely involved in exercise-induced improvements of endothelial function, and improved cardiovascular risk profile in metabolic syndrome patients.” (9,10,11)

As promising as aerobic interval training is, there is a common sense caveat that I need to put forth. Before starting any serious exercise regimen, consult with your doctor first. This is especially important if you have a pre-existing medical condition. In most instances, you’ll probably find that your physician is quite supportive of the idea of AIT. He or she may be aware of studies that show that interval training can actually lower the rates of all-cause mortality and hospitalization in patients with conditions as serious as chronic heart failure. Even so, one of the founding tenants of holistic medicine should be applied here and always: don’t generalize, treat the individual. No two people are the same. So start by getting the go-ahead from your health care team and then begin walking your way to better health – at a slightly different pace. (12,13,14)