Home > Diet and Weight Loss, Food and Drink, Heart Health > Chocolate News You Can Use

Chocolate News You Can Use

At this years Natural Products Expo West, a new line of cocoa-based supplements received a great deal of attention. This is the latest example of a renewed sense of excitement surrounding the health potential of Theobroma cacao extracts and foods. However, not everyone is ready to embrace chocolate as a health food. Some health authorities are hesitant about giving their seal of approval, citing concerns ranging from increased cardiovascular risk to obesity. Who are we to believe? Should we place our faith in supplement manufacturers who suggest a broad array of health benefits or the skeptics that still consider chocolate merely candy? 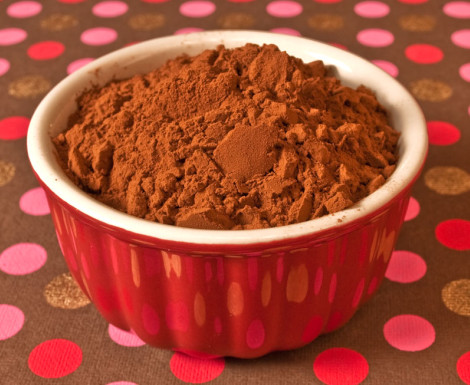 Whenever you don’t know who to trust in medicine or otherwise, try to examine the evidence upon which the varied assertions are based. In the case of chocolate, I know better than to blindly trust supplement companies that are constantly looking for new and exciting products to develop. At the same time, I’ve heard and read too many nutritionists who disregard genuinely healthy foods and supplements offhandedly for whatever reasons – bias, ignorance, etc. That’s why it’s vital to develop good detective skills of your own and seek out a “brain trust” of people who are in the know who can help you get at the truth.

At the core of cocoa’s current revival are recent studies showing that it benefits the circulatory system. A study set to appear in the June 2011 issue of the journal Physiology & Behavior reports that eating dark chocolate daily improves both cognitive and visual performance. The well designed study involving 30 healthy adults provided either dark chocolate containing 720 mg of cocoa antioxidants (flavanols) or white chocolate (flavanol-free) on separate occasions. The benefits noted by the authors were attributed to increased cerebral and retinal blood flow during the dark chocolate phase of the trial. The way by which cocoa flavanols support healthier circulation may be by: 1) improving endothelial function via the “maintenance of optimal NO (nitric oxide) levels”; 2) inhibiting the activity of ACE or angiotensin-converting enzyme and; 3) protecting against free radical damage in the cardiovascular system. The observations are particularly intriguing when you consider that synthetic ACE inhibitors are typically used to treat congestive heart failure and/or high blood pressure. (1,2,3)

Cholesterol lowering medications are hallmark treatments for the prevention and onset of heart disease in conventional medical practice. Cocoa doesn’t have as profound an effect on lipid levels as statin drugs. However, T. cacao extracts may present a wider range of cardiovascular benefits with a decidedly lower risk of adverse reactions. Numerous trials published in prestigious journals confirm that daily consumption of dark chocolate elevates HDL (“good”) cholesterol while reducing LDL (“bad”) and oxidized cholesterol, improves glycemic control and insulin resistance, and reduces inflammatory markers. And now that researchers are beginning to unravel exactly how cocoa works its “magic”, via “increased sterol regulatory element binding proteins (SREBPs) and activated LDL receptors in HepG2 cells”, even some hard-nosed scientists may finally soften to the possibility that this traditional treat may actually possess medicinal properties. (4,5,6,7,8)

Now let’s move on to the obesity concern expressed by some medical experts. A few little known facts turn this preoccupation on its head. There are certain components of unrefined cocoa that likely discourage weight gain. Current presentations in the Journal of Agricultural Food Chemistry and Planta Medica document a digestive enzyme inhibiting action of cocoa extracts. In practical terms, this means that antioxidants found in cocoa decrease the digestion of select food elements including carbohydrates and fats by suppressing the enzymes a-amylase and lipase. And whereas drugs that do the same may be unsafe, cocoa yields an unquestionably superior safety profile. Also, it’s now been determined that unprocessed cocoa supports the growth of friendly bacteria or probiotics in the digestive system. An emerging theory in the field of weight management is that a greater proportion of healthy bacteria tends to promote better “body weight equilibrium”. (9,10,11,12,13,14,15)

The Relative Antioxidant Activity of Cocoa 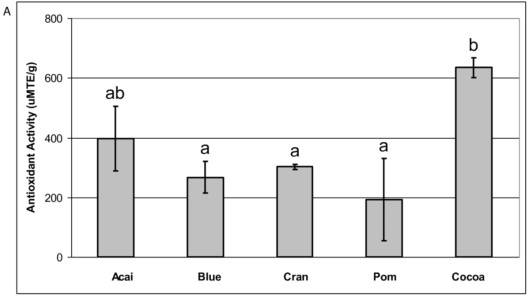 Two of the biggest reservations about the composition of cocoa have to do with its saturated fat content (mostly stearic acid) and its naturally occurring stimulants (caffeine and theobromine). A new study in the April 2011 edition of the journal Lipids compared the impact of supplementing the diets of 10 healthy women with cocoa butter and olive oil in a crossover fashion. The researchers conducting the trial examined the influence of the two fat sources on C-reactive protein (CRP) and interleukin-6 (IL-6), systemic inflammatory markers. Elevated CRP and/or IL-6 levels have been associated with an increased risk of cardiovascular disease. Neither of the test fats were found to negatively influence inflammation when given in high dosages (1 gram/kg of body weight/day). It should also be noted that adding cocoa flavanols to meals high in fat tends to offset any fat related circulatory dysfunction. On the stimulant front, current experiments report that although cocoa extracts can reduce fatigue, their natural stimulant content does not increase blood pressure. Both of these observation are ultimately borne out when large scale studies investigate the relative incidence of coronary heart disease (CHD) based on chocolate consumption. The latest, appearing in the April 2011 issue of the journal Clinical Nutrition, determined that those eating 5 or more servings of chocolate a week were 57% less likely to present CHD than infrequent chocolate eaters. (16,17,18,19,20)

There are many different forms of chocolate on the market. As I mentioned in the opening paragraph, some supplement companies now offer concentrated cocoa extracts. This isn’t a bad option. At least when you opt for encapsulated cocoa extracts, you can be reasonably certain that you’ll avoid the added sugar contained in most chocolate bars and drinks. But I personally prefer a much more basic source of chocolate – pure, organic cocoa powder. It’s more economical and it doesn’t strip the fiber content from the end product. Several promising studies in both animal and human subjects reveal that cocoa fiber supports regularity and tends to improve various risk markers associated with cardiovascular disease and diabetes. Most refined chocolate snacks simply can’t be expected to afford that same level of protection. By using pure, non-alkaline (or non-Dutched) cocoa, you’ll get a fair share of antioxidants and a significant helping of dietary fiber. This makes for a truly heart healthy treat that shows no reason to cause any controversy whatsoever. (21,22,23,24,25)


12 Comments & Updates to “Chocolate News You Can Use”