Think of all the pregnancies that take place during the course of a given year. Thankfully, most are relatively free of serious complications. But, about 5% to 8% of all expectant mothers must contend with a condition known as preeclampsia (PE) that threatens both woman and child. Preeclampsia is characterized by a dangerous rise in blood pressure that occurs after the 20th week of pregnancy. Some of the possible symptoms include abdominal pain, nausea, vomiting, blurred vision with the appearance of auras and spots, and swelling in the eyes, face and hands or edema. According to the Preeclampsia Foundation this contributes approximately seven billion dollars a year in US health care spending alone. Worldwide, it may account for as many as 76,000 deaths annually. (1,2,3) 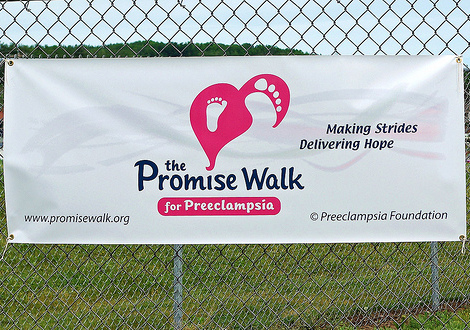 There are numerous known and suspected risk factors for preeclampsia. A history of diabetes, high blood pressure and kidney disease tops the list.  First pregnancy and “multiple pregnancy (twins or more)”, also increases the likelihood. Obesity and pregnancies involving mothers over the age of 35 are similarly linked to pregnancy induced hypertension.

Diet is the first issue to address in the hope of reducing preeclampsia risk. Several recent studies in the medical literature describe a style of eating that may afford significant protection. The primary approach for dealing with PE nutritionally involves maintaining optimal blood sugar levels. This can largely be accomplished by eating a whole food based diet that’s rich in healthy sources of fat and protein, low glycemic fruits and non-starchy vegetables. Such a menu plan is naturally high in antioxidants, fiber, minerals and vitamins. It not only helps to minimize excessive weight gain, but also supports insulin sensitivity. This latter point is pivotal because insulin resistance has been repeatedly linked to greater preeclampsia incidence. (4,5,6,7,8,9,10)

Experiencing distress as part of pregnancy is not uncommon. However, that’s not to say that stress should simply be accepted as the norm and that there are no consequences involved. Feeling stressed out isn’t just a state of mind. Psychological distress is known to adversely affect immune and neuroendocrine function. In fact, higher levels of stress hormones, such as cortisol, may actually contribute to preeclampsia risk and subsequent mental health issues in offspring. Mind/body therapies ranging from gentle forms of exercise and yoga to guided imagery have all been shown to improve quality of life and moderate blood pressure in hypertensive pregnant women. (11,12,13,14,15)

Next, let’s discuss so-called “medicinal foods”. The amino acid arginine may be of specific value to women at risk for preeclampsia. The latest issue of the British Medical Journal describes how a nutritional bar providing a total of 6.6 grams of arginine/day effectively reduced the risk of PE in a group of 222 pregnant women. A placebo bar and a bar containing added antioxidants (Vitamins C and E) were used as comparison models. The interventional bar also contained Vitamins C and E along with supplemental arginine. It outperformed both the placebo and the antioxidant-only bars. This finding is supported by several previous trials that have utilized encapsulated and tablet forms of the amino acid. Cardiologists believe that arginine invokes a hypotensive response by increasing the production of nitric oxide, a vasodilator. A few points of note about this protein component: a) it only appears to lower blood pressure when used for prolonged periods of time; b) many foods are abundant sources of naturally occurring arginine including: crab, peanuts, sesame seeds, shrimp, soybeans, spinach, turkey and watercress. (16,17,18,19,20)

Preparing for pregnancy by taking a high potency prenatal or female specific multivitamin/mineral is another proactive step one can take to avoid PE. Well formulated multi-nutrient supplements will provide optimal quantities of macro and micro nutrients such as magnesium, selenium, Vitamin D and zinc which have all been associated with lower preeclampsia occurrence. Calcium, one of the most important minerals with respect to PE,  probably won’t be found in sufficient amounts in one-a-day products. Therefore, a separate calcium or calcium/magnesium supplement is often recommended. (21,22,23,24,25,26,27)

Changes in Calcium Metabolism During Pregnancy May Contribute to Preeclampsia Risk 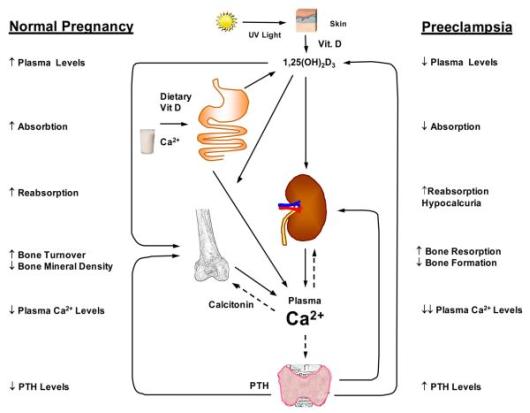 Two “C”s come to mind when I think of preeclampsia. The first C is for chocolate. That’s right, chocolate. Recent studies indicate that moderate amounts of chocolate consumption may significantly reduce the risk of preeclampsia and gestational hypertension. One publication found that eating chocolate regularly reduced the odds of PE by over 40%. Another investigation found that women who ate 5 or more servings of cocoa per week exhibited a decreased risk of 19% during their first trimester and 40% in the final three months of pregnancy. The second C stands for Coenzyme Q10, a lipid soluble antioxidant that plays an important role in cellular energy production. Publications dating back to 2003 have identified lower plasma levels of CoQ10 in patients with preeclampsia. In 2009, a trial set out to determine whether supplemental CoQ10 (200 mg/day) would aid those with PE. The results revealed a relative risk reduction of 44% in those receiving CoQ10 compared to a placebo. Unfortunately there hasn’t been any follow-up research in this area. As such, the initial promise of CoQ10 should be considered preliminary. (28,29,30,31,32,33)

Protecting yourself and your baby from preeclampsia starts with treating yourself right. As you were reading today’s column you may have noticed that many of the points I made could very well have been included in blogs about completely different health topics. The promotion of good health often functions in just that way. There are definite crossover benefits that apply to core diet and lifestyle guidelines. But, there are also some provisions that are condition specific. A final example has to do with one of my favorite dietary components: tea. Surprisingly, drinking tea daily may increase the risk of PE, possibly due to interference with the absorption and retention of essential nutrients including folic acid and iron. This simply goes to show that not every natural food and remedy is appropriate under every circumstance. But it also illustrates how much more control we can exert over our own health care future by simply being well informed. (34,35,36,37,38)