Eating fresh fruits and vegetables is a commendable thing to do. Getting sick because you do seems just plain wrong. But it does happen on rare occasions and it should serve as a reminder that we’re not the only organisms running the show. A microscopic bacterium known as Escherichia coli is naturally present in our intestines and in some of the food we eat. In most cases, it doesn’t cause a problem. It’s kind of like background noise that is below a level of detection. However, every once in a while a particularly virulent strain of E. coli drops by to wreak havoc. 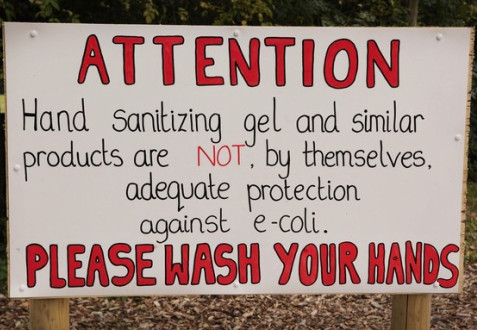 There are three primary ways we are exposed to E. coli – via food, animals/humans and water. Raw and undercooked foods are typically the source of the problem. As an example, the current E. coli outbreak in Europe may be caused by contaminated cucumbers, green salads, sprouts and tomatoes. Fresh produce can pick up E. coli during the growing, harvesting or transporting stage of its life and sales cycle. Person to person transmission can also take place. This applies not only to those exposed to farms and livestock, but also to those in the service industry. This is one reason why many restrooms carry signs demanding that employees wash their hands with soap before leaving the facility.

The majority of E. coli infections result in short-lived bouts of diarrhea. The real danger occurs when unusually aggressive forms of the bacterium attach to the gut and form colonies whose sole purpose it to produce toxins. It’s estimated that about 1 in 10 people with E. coli contend with this form of the infection – which can ultimately destroy blood cells and lead to kidney failure (hemolytic uremic syndrome). Timely treatment is essential in order to prevent these serious consequences. If you suspect that you have been exposed to E. coli, look out for the following symptoms: bloody diarrhea, fatigue, nausea, stomach cramps and vomiting. Intravenous fluid therapy can be applied swiftly to prevent irreversible kidney damage. (1,2,3)

Certain populations may be at higher risk for developing E. coli-related symptoms. Seniors and young children fall into this category. Older and younger patients also present a higher risk for serious complications. Those with compromised immune function similarly must beware. Finally, men and women who have undergone gastric bypass appear to be more sensitive to this pathogenic bacterium because it has abbreviated contact with (protective) stomach acid. (4) 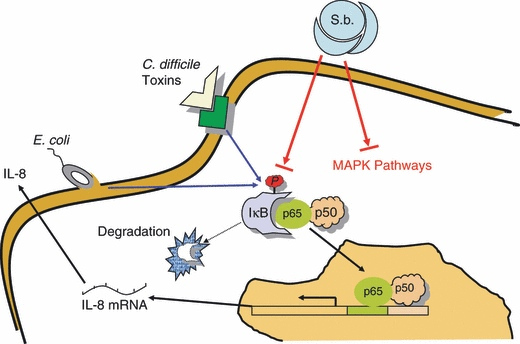 Several natural approaches may help level the playing field with respect to E. coli. The following information is by no means intended to replace the guidance and treatments prescribed by your health care team. This is simply a potential way to make your body less attractive to pathogens such as E. coli.

Cranberries and cranberry extracts are known to inhibit the adhesion of E. coli. Proanthocyanidins or PACs, a class of phytochemicals present in cranberries, is believed primarily responsible for the anti-adhesion and anti-virulent impact of cranberry extracts. They are typically put to use by those at risk for urinary tract infections. However, it’s theoretically possible that this common berry may be useful in dealing with E. coli in the intestines as well. As an added bonus, it appears that cranberries do not adversely affect healthy bacteria that share the affected area. (5,6,7,8,9)

Eating a fiber rich diet and including select antimicrobial foods may be of value. Both animal and human research suggests that improving gut transit time via a high fiber diet lowers E. coli cell densities. On the other hand low fiber diets may contribute to a more hospitable locale for this bacterium to take hold. Food such as apples, garlic and ginger may likewise control E. coli counts while simultaneously promoting the growth of desirable bacteria (Bifidobacteria lactis, Lactobacillus reuteri and Lactobacillus rhamnosus). (10,11,12,13,14)

Direct (probiotic) or in-direct (prebiotic) administration of healthy bacteria is yet another method to create a more hardy digestive and immune system. This can be accomplished in two ways: 1) by supplementing or eating foods that contain prebiotic fibers which promote the growth of healthy microbes; 2) using specific strains of probiotics directly (Saccharomyces boulardii, Saccharomyces cerecisiae, Lactobacillus plantarum, etc.) or probiotic yogurt. Once in place, probiotics secrete natural substances that discourage the growth of harmful bacteria via the production of acidic “metabolic endproduces” and “natural antibiotics” while supporting the integrity of the intestinal barrier. (15,16,17,18,19,20,21)

The exact cause and origin of the European E. coli outbreak that’s in the news largely remains a mystery. A specialist at the World Health Organization, Dr. Flemming Scheutz, explains that this strain “has never been found in any animal, so it is possible that it could have come straight from the environment into humans”. In time, we’ll almost certainly learn the culprits involved. But, what’s most important to keep in mind right now is how to protect yourself from E. coli in the first place. Cook meat to an internal temperature of 160ºF and only select protein sources from reliable vendors. Prevent cross contamination in the kitchen by keeping cooked and raw foods separate. Wash fruits and vegetables well before eating them raw. This is especially important because it’s theorized that this current strain of E. coli adheres to food sources very efficiently. Finally, wash your hands thoroughly after changing diapers, handling farm animals or pets and using the restroom. Every proactive step you take to support your safety and wellness will reduce present and future E. coli threats. (22,23,24)