At this very moment in laboratories throughout the world there are scientists creating and/or isolating chemicals that the human body will hopefully perceive as sugar. The ultimate goal is to manufacture white crystalline powders that are free of aftertaste, calories and harmful side affects. By achieving this objective, billions upon billions of dollars would be assured. What’s more, consumers, including diabetics, would finally be able to enjoy desserts and sweets of all kinds without fear of health related consequences. Many regulatory agencies in the US and abroad believe such products are already available. They carry names such as NutraSweet, Splenda and Sweet ‘N’ Low. But not all consumer advocacy groups and medical experts agree with this position. Taste issues aside, some of these synthetic sweeteners may not be as safe as they claim. 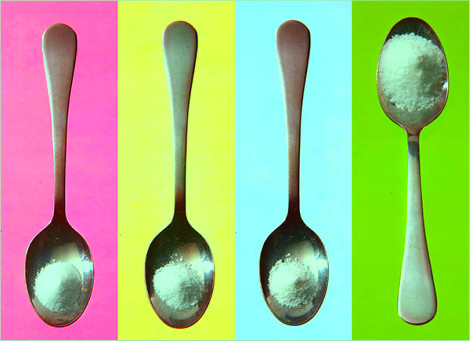 This year’s American Diabetes Association’s Scientific Sessions featured two studies that may inspire new debate about the safety of aspartame, one of the most popular artificial sweeteners currently on the market. In the first investigation, diet soft drink intake was examined in a group of 474 elderly European and Mexican Americans. The study volunteers had their height, waist circumference and weight examined at the beginning of the research and at three follow-up appointments over a 10 year period. Overall, those who drank diet soft drinks exhibited a 70% greater increase in waist circumference compared to those who didn’t drink diet pop. Participants who drank two or more diet sodas daily averaged increases in waist circumference 500% higher than “non-users”. This is of particular concern because having a larger waist circumference has been repeatedly linked to cardiovascular disease, diabetes and an elevated risk of all-cause mortality.

Here are a few concluding remarks given by the authors of the study: “These results suggest that, amidst the national drive to reduce consumption of sugar-sweetened drinks, policies that would promote the consumption of diet soft drinks may have unintended deleterious effects.” They went on to add: “Data from this and other prospective studies suggest that the promotion of diet sodas and artificial sweeteners as healthy alternatives may be ill-advised”.

The second study presented at the conference was conducted in “diabetes-prone” mice. Two groups of test animals were fed one of two diets: 1) chow enriched with corn oil; 2) chow with added corn oil and aspartame. The mice fed the chow with aspartame were found to have “elevated fasting glucose levels but equal or diminished insulin levels, consistent with early declines in pancreatic beta-cell function”. According to the co-author of the study, Dr. Gabriel Fernandes, “These results suggest that heavy aspartame exposure might potentially directly contribute to increased blood glucose levels, and thus contribute to the associations observed between diet soda consumption and the risk of diabetes in humans”. (1)

While recently perusing the medical literature, I came across other examples of preliminary data about artificial sweeteners (AS) that I find troubling. Here’s a brief review of some the highlights which may help you make up your own mind about this controversial topic:

The studies listed above are only the tip of the iceberg. In France, researchers from Burgundy University report that some fibromyalgia patients have had “complete regression” of symptoms when aspartame is removed from their diets. In Hungary, an animal study found that a combination of artificial sweeteners results in increased body weight even in the absence of higher food intake. Italian scientists recently revealed that mice that are chronically fed aspartame over their lifetime are more likely to develop liver and lung tumors. Even the most current scientific reviews on both acesulfame potassium (Sunett/Sweet One) and aspartame (Equal/NutraSweet) hesitate to give wholehearted endorsements with regard to safety. (5,6,7,8,9) 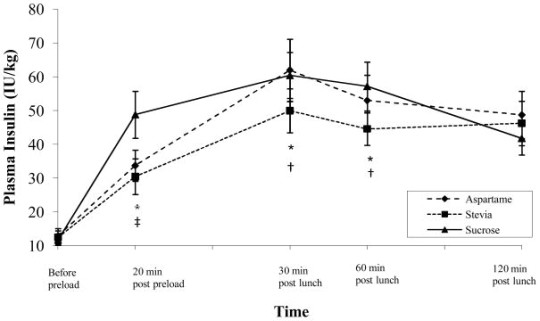 In my opinion, there are just simply too many unanswered questions about artificial sweeteners (AS). Here are three examples that support my sense of uncertainty: 1) The popular AS, sucralose, has a minimal impact on blood sugar.  However, it is often sold in products that combine it with a high-glycemic carbohydrate known as maltodextrin. A recent experiment found that this combination does, in fact, increase blood glucose and insulin in healthy human subjects. 2) Feeding mice high saccharin diets stimulates sugary food intake or “bingeing-proness”. 3) Acesulfame-K consumed by pregnant mice can be passed on to prenatal and postnatal mice through amniotic fluid and breast milk. This may in turn influence the sweet preference of the growing mice. (10,11,12)

One of the questions I’m frequently asked is whether natural, non-nutritive sweeteners such as stevia have a similar affect as artificial counterparts. The limited amount of data available indicates otherwise. A head-to-head study from August 2010 pitted aspartame against stevia in a group of 31 adults. Before and after blood tests revealed that stevia demonstrated a milder influence on blood sugar and insulin than aspartame. It’s also important to note that while aspartame is often associated with adverse effects in clinical trials, stevia is typically linked to “side benefits” including anti-diabetic activity, i.e. protection against kidney and pancreatic beta-cell damage. (13,14,15)

If you examine the labels of many stevia-based sweeteners you’ll notice that they often contain “other ingredients”. These natural substances are typically used as carriers. Pure stevia is extremely sweet, purportedly up to 300 times as sweet as common table sugar. Therefore, it needs to be diluted by adding it to a much less sweet base ingredient. Erythritol and inulin are two of the most commonly used additives in stevia products. The good news about these supporting ingredients is that they also have side benefits of their own. Erythritol possesses potent antioxidant properties that may shield the cardiovascular system from elevated blood sugar or hyperglycemia. Inulin is a prized prebiotic that supports the growth of healthy bacteria in the gut in both old and young alike. It is for these reasons that I tend to use stevia and stevia blends in the Heathy Fellow test kitchen instead of artificial sweeteners. After reading today’s column, I hope you’ll consider doing the same. (16,17,18)