Last week, I stopped into a popular coffee shop and ordered a large, iced Americano. While waiting to pay, I noticed an advertisement for a new line of icy, fruit flavored drinks that featured green coffee extract. That’s right, green coffee. Combining coffee and fruit may seem like an odd pairing, but, in reality, the flavor of raw coffee beans bears little to no resemblance to the brewed forms of coffee enjoyed the world over. Taste issues aside, you may be wondering why green coffee extract would be included in summery drinks and/or so called “functional foods” in the first place. 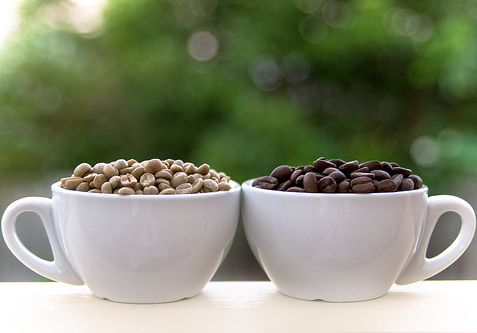 High heat processing, as is employed in coffee roasting, changes the antioxidant profile of coffee beans. One of the claims most often made about green coffee extract or GCE is that it is higher in antioxidants than conventional black coffee. This assertion is not without some basis in science. A study in the July 2001 issue of the Journal of Agricultural Food Chemistry reports that different varieties of green coffee beans (Arabica and Robusta) possess higher antioxidant activity prior to roasting. What’s more, human trials have determined that select antioxidants in GCE (chlorogenic acids) are absorbed well and result in reductions in plasma oxidative stress. (1,2,3)

As far as I’m concerned, green coffee’s greatest potential lies in the realm of cardiovascular health promotion. Several preliminary trials reveal that GCEs that are standardized for high levels of chlorogenic acids (CGAs) are capable of lowering diastolic and systolic blood pressure in a safe manner. A dosage of approximately 140 mg of CGAs/day appears to be a sufficient quantity of the active ingredient. A Japanese study from October 2004 attempted to uncover the mechanism by which green coffee exerts its antihypertensive effects. The findings presented in the journal Hypertension Research revealed a positive change in blood flow via improved vasoreactivity (reactive hyperemia ratio) and a significant decline in plasma homocysteine concentrations. Homocysteine is an amino acid which may contribute to cardiovascular disease when present in excess amounts. (4,5,6,7,8) 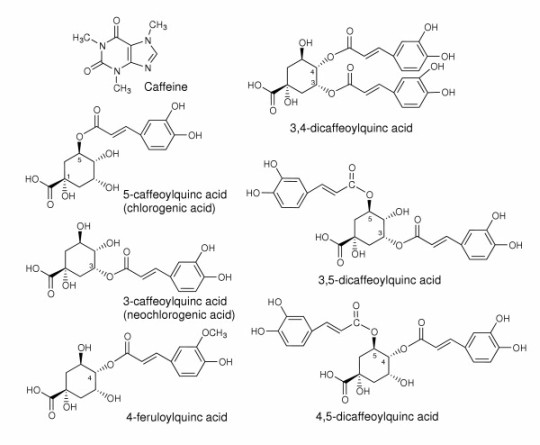 The most marketable reason to include green coffee in a food or product is the commonly made pronouncement that it can stimulate weight loss. A recent meta-analysis and systematic review in the journal Gastroenterology Research and Practice scientifically evaluated this enticing claim. A paltry three studies met the basic criteria required for inclusion in the summary. On average, the trials were relatively small and included between 30 – 62 participants. The daily dosage of green coffee extract used ranged from 180mg – 200mg/day. The studies took place over 4 weeks, 12 weeks and, again, 12 weeks. The weight loss reported was -2.97 lbs, -11.90 lbs and -10.96 lbs respectively. All of the trials were randomized and did not require additional dietary or lifestyle modifications that may have contributed to the noted reduction in weight. Ultimately, the authors of the review concluded that “the results from these trials are promising, but the studies are all of poor methodological quality. More rigorous trials are needed to assess the usefulness of GCE as a weight loss tool.” (9)

It’s vitally important to apply scientific research in a real world setting. It is plausible that green coffee extracts can, in fact, support a healthier weight in humans. Apart from the previously mentioned studies, animal and in vitro experiments have identified a number of ways by which GCE could reasonably accomplish this feat. Chief among the theories is green coffee’s ability to reduce glucose absorption in the intestines and prevent fat accumulation in the liver. However, it’s important to note that even in the best possible scenario, GCE is unlikely to do much for your waistline if you simply consume it in an occasional fruit drink. A daily, therapeutic quantity is the only thing that “may” assist with the goal of weight loss. Therefore, the most one can realistically expect from trendy drinks containing GCE is a temporary antioxidant boost and some momentary refreshment. But sometimes, that’s good enough. (10,11,12)