One of the more appealing aspects of holistic medicine is that it affords many choices for health care consumers. For example, if you’re consistently stressed out, you can opt for natural treatments ranging from aromatherapy to visualization. If chronic pain is your issue, acupuncture or nutritional supplements may alleviate some or all of your discomfort. This is reassuring to know because it allows you to apply your own personal preferences when deciding upon a therapeutic protocol. That alone tips the balance of healing in your favor because it empowers you. 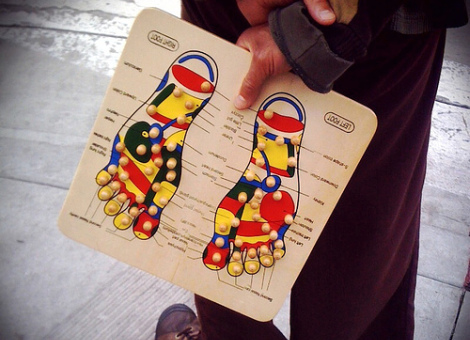 Reflexology is one of my favorite healing modalities. It’s essentially a variety of acupressure that is applied to the soles and toes. Proponents of reflexology claim that specific points and regions of the feet correspond with glands, organs and systems throughout the body. However, this theory is not universally accepted. In fact, even some advocates aren’t convinced of the whole body reflexive effect espoused by reflexologists. Rather, they believe that the anecdotal and clinical benefits noted are more likely due to chemical and psychological shifts that are similar to what one could expect from other forms of bodywork or massage.

Scientific trials provide the best framework for expanding our knowledge of just what reflexology is capable of accomplishing. Several recent publications have specifically focused on the effects of this bodywork in women of all ages. Here’s a summary of what researchers are discovering:

To be clear, there’s nothing wrong with a good foot massage that doesn’t involve the stimulation of reflex points. In fact, foot massage may offer a safe and viable alternative treatment for women even under the most delicate circumstances. Two recent studies document foot massage as an excellent way to reduce lower leg edema (fluid retention) and postoperative pain in pregnant women. When applicable, using natural therapies such as foot massage not only benefits the mothers and mothers-to-be, but also the infants and infants to be. (4,5)

If any of the fellows out there are feeling left out, giving your girlfriend or wife a foot massage at least twice a week may improve the quality of your marriage or relationship. I’m not trying to move in on Dr. Phil’s territory, just passing along this helpful piece of advice from the August 2010 issue of the Journal of Korean Academy of Nursing. In it, researchers asked 36 married couples to do nothing special or give each other a foot massage. When analyzing the post-trial data, it became apparent that the massage group made significant strides in communication, intimacy and quality of life. What’s more, a decline in conflicts was also evidenced. (6)

Earlier I mentioned conflicting views about how and why reflexology achieves therapeutic outcomes. I’m not convinced that the reflex theory holds water. I’m certainly open to the idea, but I don’t think it’s been scientifically validated as of yet. What I can tell you is that I find individual, though sporadic, reflexology sessions profoundly enjoyable and relaxing. I feel great afterwards. But, I can’t draw any firm conclusions because I simply haven’t received a consistent course of treatment. This is why I’m hoping to see more solid research in the coming years that will provide a stronger foundation for this form of bodywork. In the meantime, I may just invest some time in learning more about “self reflexology”. The price is right and the benefits may be many.