Prostate cancer (PC) is the leading form of cancer among men. It is estimated that nearly 30,000 men will die from this dreaded condition this year alone. That’s the problem. The solution may be found, in part, in the judicious use of natural medicines.

Noscapine is a natural substance that is most often used as a cough suppressant. It’s been used for that purpose for almost 50 years. But recently, it has also become the focus of serious interest with regard to the treatment of various cancers. Brain, breast, colon, lung and ovarian cancers all seem responsive to noscapine. Leukemia and melanoma also appear to be good candidates for noscapine therapy.

With this knowledge in mind, Dr. Israel Barken, a scientist working at the Prostate Cancer Research and Educational Foundation, wondered whether it might also help patients with PC. He experimented with a handful of his own patients and found promising results. Based on that limited success, his foundation decided to fund a clinical investigation on the effects of noscadine on PC.

Dr. Barken’s initiative may be a reason for all men to rejoice. The study he instigated found that this old and unassuming natural substance could:

Noscadine isn’t currently approved as a treatment for cancer. There isn’t nearly enough research to allow for that at this time. Such research would involve a serious financial investment. And since natural substances generally can’t be patented or used for profit, the likelihood of much additional study seems grim. But, all hope is not lost.

There is a practice called “off-label use”. It refers to the use of an approved medication for an unapproved condition. In this case, noscadine is approved for treating coughs. But, it is being used in an “off-label” manner to treat cancer experimentally. 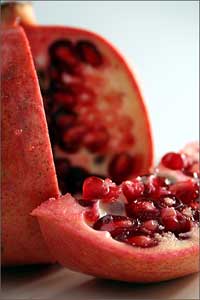 Two recent studies have added to the increasing volume of evidence indicating that pomegranate extract may be a promising treatment for PC.

In one study, the pomegranate extract was shown to:

In prostate cancer, one of the major concerns is that the cancer will shift from being dependent on hormones (like testosterone) to grow to being “androgen independent” (grow even in the absence of hormonal stimulation). This is one of the deadliest processes in prostate cancer, which often leads to the spread of cancer and, often, death.

All of the research I’ve shared today is highly preliminary. Well, that’s one way of looking at it. Another way is to view it as cutting-edge. It’s research that I hope other scientists will further in the interest of mankind. And if they do, I’ll be sure to report about it.