A startling report was just presented at the 2009 American Heart Association’s Conference on Cardiovascular Disease Epidemiology and Prevention. The implications of that presentation will hopefully have a widespread impact on the future health of teenagers in the USA and worldwide.

Health from the Sun

The report in question was based on a recent study published in the journal Pediatrics. The focus of the investigation was to determine the frequency and consequences of vitamin D deficiency in adolescents residing in the United States. Almost 3,000 boys and girls between the ages of 12 to 19 participated in the study. The group consisted of 49% females and 51% males. In terms of the ethnic breakdown, 65% of the group were classified as “non-Hispanic whites”, 14% were defined as “non-Hispanic blacks” and the remaining 11% were Mexican Americans.

The researchers, based at Johns Hopkins Bloomberg School of Public Health in Baltimore, tested blood samples from the young men and women to determine their levels of vitamin D. The “biomarker” they tested for measures the vitamin D content that is derived from food, supplements and sun exposure. 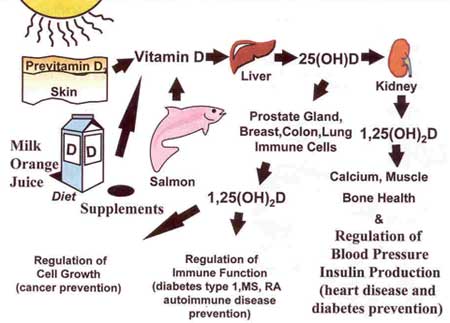 On average, the white volunteers had the highest serum levels of vitamin D (28 ng/mL). But the Mexican American and black participants had significantly lower levels – 21.5 ng/mL and 15.5 ng/mL, respectively. In particular, the black adolescents were generally considered deficient in vitamin D – given the current recommendations of at least 20 ng/nL.

How can this discrepancy be explained? It could be due to higher amounts of melanin found in the skin of darker-complected individuals. Melanin is a pigment in the skin which helps to protect against ultraviolet radiation from the sun. This is usually a positive effect. But in parts of the world where sun-exposure isn’t plentiful, melanin may actually interfere with the skins ability to manufacture vitamin D. Other factors such as diet, obesity and limited access to the outdoors may also contribute to this health risk.

These findings are extremely important when we factor in the potential consequences of a lack of this vital nutrient. To that end, the researchers then examined what kinds of risks the youngsters (with vitamin D deficiency) were facing. Here’s what they uncovered:

Metabolic Syndrome (also known as Syndrome X) is a combination of conditions that raise the overall risk of heart disease and stroke. For instance, if someone has type 2 diabetes, high blood pressure and poor cholesterol figures, they’d be classified as suffering from Metabolic Syndrome.

The lead author of the study, Dr. Jared P. Reis, observed that, “We showed strong associations between low levels of vitamin D and higher risk of high blood pressure, hyperglycemia and metabolic syndrome among adolescents, confirming the results of studies among adults”.

The information presented at the American Heart Association conference isn’t the only alarm bell that’s rung recently with regard to vitamin D and our youth. Another 2009 trial, conducted on girls 12 to 14, showed a positive connection between adequate vitamin D and muscle strength. Consequently, those with lower levels of D exhibited weaker physical performance.

Yet another study reported in the January 2009 issue of the Journal of Clinical Endocrinology & Metabolism showed increased body fat and decreased height as consequences of vitamin D deficiency.

We’re often made aware of the importance of calcium during the growing stages of our lives. But I think modern science is telling us that we need to keep an eye on vitamin D as well. Not only does it play an integral role in the development of our skeletal system but its reach extends far beyond. We must also pay attention to the unique and different qualities that we all possess. In the case of vitamin D, the darker your complexion, the more at risk you may be for a deficiency. By increasing our awareness of the benefits and risks of various nutrients, we can help ensure the good health of this generation and those to come.