Let’s go back in time ten years. It’s 1998 and you and I are playing a guessing game. The topic is: What will be the hottest health food in the year 2008? I’m not sure what I would have guessed. But I’m fairly confident that neither of us would have guessed that food would be chocolate.

The fact is that cocoa has quickly become one of the most popular foods to study among researcher scientists. The main reason is that scientists recently discovered that cocoa is a rich source of hard to find antioxidants and beneficial phytochemicals. Phytochemicals are natural chemicals produced by plants.

The ironic thing about the majority of the research is that science is providing evidence that cocoa is particularly healthful with regard to cardio-protection (heart health) and promoting better health in diabetics. Sound too good to be true? It’s not. But, there is a catch.

The Darker the Better 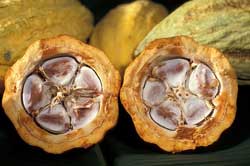 The type of chocolate that I’m referring to is not the variety that many of us grew up with. Healthy chocolate is best found in pure cocoa powder or in candies with high percentages of actual cocoa. So sorry folks, but a Snickers bar isn’t going to help your health. Quite the opposite, in fact. What you’re looking for is dark chocolate bar with a cocoa content of greater than 70%. Or, you can do what I do and make hot cocoa out of 100% pure cocoa powder. I’ll include a simple recipe below.

I won’t get overly scientific on you today, but I do want to briefly mention a few interesting research highlights about this remarkable bean.

I call this “real” because it’s the real deal. There’s lots of pure, naturally-processed cocoa in it. The kind of cocoa that’s good for your health and that gives you more “bang for your buck”.

Step 1: Add about 2 tablespoons of a pure cocoa powder to a cup.

Step 2: Add some natural sweetener. Keep in mind that pure cocoa is actually quite bitter. Adding a healthy sweetener can help to counter the bitter taste. By the way, I always use a stevia-based sweetening product. Stevia is all natural and virtually calorie free. I also like that it rarely affects blood sugar levels.

Step 3: Heat some water and add it to the cup once the water is good and hot. Mix it up well with a spoon.

Step 4: Add milk (any kind – almond milk, cow’s milk, soy milk, coconut milk, etc.) to the hot cocoa. This will make it smooth and mellow out the taste a bit.

Step 5: Experiment. Add some peppermint or vanilla extract if you’d like. Use hot coffee instead of water, if you’d prefer. Some people like to add a pinch of sea salt or cinnamon. Whatever makes you happy!

I try to have a cup or two of my real hot cocoa just about every day. That’s how important I think it is.

Ain’t science grand? So, what do you think the hottest health food will be in the year 2018? I wonder.