The wisdom that comes only after many years of living and learning is generally a desirable by-product of the aging process. On the other hand, many of the physical changes that are a part of the equation are almost always unwelcome. A similar dynamic occurs in the maturation of food. A certain degree of ripeness is necessary in order for most fruits and vegetables to be edible. But if they’re left to ripen for too long, they’ll spoil. However, there are certain instances where prolonged aging of food can yield medicinal properties. One example is the unique aging process that Allium sativum (garlic) sometimes undergoes. 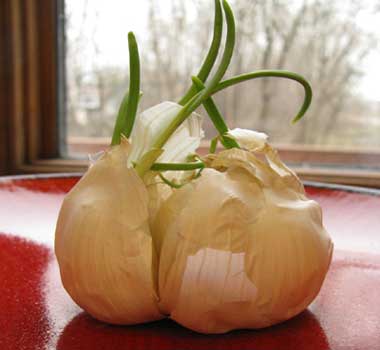 Aged garlic extract (AGE) differs from dietary garlic and most garlic supplements because, as indicated by its name, it is naturally aged for 20 months. During this lengthy period, the garlic changes in a few important ways: 1) the more irritating and pungent properties of the bulb are rendered much milder; 2) a conversion takes place wherein certain phytochemicals that are typically found in raw garlic are transformed into other “sulfur-containing compounds”. The latter point is significant because these substances (gamma-glutamyl cysteine, S-allyl cysteine, S-allyl mercaptocysteine and S-methyl cysteine) are not normally found in cooked or raw garlic and are believed to be responsible for the unique health benefits ascribed to AGE. In addition, recent research presented in the journal Plant Foods for Human Nutrition explains that AGE contains higher levels of certain antioxidant phenols than cooked or raw garlic. (1)

Potent cardiovascular protection is associated with AGE supplementation in three recent human studies. The latest trial was published in June 2009 in the journal Preventive Medicine. 65 patients who were at “intermediate risk” for heart disease were asked to take an AGE nutritional supplement or a placebo for one year. The specific supplement contained 250 mg of aged garlic, 100 mg of l-arginine (an amino acid), 300 mcg of folic acid, 100 mcg of Vitamin B12 and 12.5 mg of Vitamin B6. All of the patients had a coronary artery calcium scan (CAC) and a variety of blood tests at the beginning and end of the treatment period.

The authors of the study concluded that AGE “is associated with a favorable improvement in oxidative biomarkers, vascular function and reduced progression of atherosclerosis“. It’s quite possible that the addition of l-arginine and the supplemental B-Vitamins contributed to the overall efficacy of this supplement. Prior research suggests that these nutrients have anti-inflammatory properties and are supportive of healthy endothelial activity. Both of these characteristics tend to discourage tissue damage and dysfunctional arteries. (2,3,4,5,6,7,8)

In March 2006, another AGE study was presented in the Journal of Nutrition. This time, 1,200 mg of AGE or a placebo was administered to 23 “high-risk patients”. All of the participants were already on a prescribed aspirin (to improve circulation) and statin medication (to lower cholesterol) program. Both groups were followed for a one year period. The researchers tested the patients’ blood for S-allyl cysteine to determine whether they were complying with the therapy. By the end of the 12 month trial, the accumulation of arterial calcification had reduced dramatically in those receiving the aged garlic. Those given the AGE supplement progressed at a rate of only 7.5%. Those given the placebo exhibited a progression rate of 22.2%. (9)

A study appearing in the April 2005 issue of Phytotherapy Research demonstrated that AGE was an effective means of improving circulation (via improved endothelial function) in a group of 15 men with coronary artery disease (CAD). A marker used to determine healthy blood flow (FMD – flow mediated endothelium-dependent dilation) increased by 44% while the participants were taking the aged garlic. In this trial, the AGE garlic was once again given in conjunction with conventional care (aspirin and statin treatment). (10)

The idea that garlic can help reduce the risk of cardiovascular disease is not a new one. In fact, a recent population study from Italy determined that “intermediate” amounts of dietary garlic appears to reduce heart attack risk by up to 16%. A 2006 review from the Tufts University School of Medicine specifically singled out aged garlic as a potent cardio-tonic. The author of that summary points out several proposed mechanisms by which AGE may deliver protection: a) by combating inflammation; b) improving circulation; c) increasing antioxidant activity in the body; d) inhibiting the oxidation of LDL cholesterol; and e) reducing blood pressure and homocysteine levels. The report goes on to suggest that these same benefits appear to confer risk reduction as it applies to age-related dementia. (11,12)

Another reason to consider AGE is that it appears to counter physical fatigue. This can be a major issue in those suffering from cardiovascular disease. Moreover, an inability to stay active may contribute to disease progression and related issues such as obesity. (13,14)

Some of the studies I’ve cited today have successfully combined AGE with conventional medications. If you decide to try aged garlic and you happen to be on medications, I would suggest that you ask your doctor or pharmacist whether the combination is appropriate. There are some theoretical concerns about interactions mentioned in the medical literature. Until there is a more definite consensus about this issue, I think it’s important to err on the side of caution. (15,16,17)

I’m thrilled that research is being conducted on natural medicines like AGE. But please keep in mind that such studies are intended to specifically test the merits of this one supplement. They don’t ask the study volunteers to change their diets or to make other healthful lifestyle modifications. The only thing they’re instructed to do is to “pop a pill”. The pill itself may be a powerful, therapeutic tool, but if you’re diagnosed with a serious illness, make sure to not put all your eggs in one basket. A single pill is rarely the entire solution to any health problem. Rather, we need to look at every aspect of our lives and try to make any necessary changes that can help us find our way back to good health.