The Secret Life of Olive Oil

There’s a trend in modern medicine in which natural substances are isolated and then transformed into artificial chemicals which can be tested, patented and eventually sold as prescription medications. This has become the accepted mode by which conventional medicine has chosen to incorporate nature into science. But a lesson that’s been learned time and time again is that science is often not very good at accurately replicating nature. A recent example of this is currently under development. It’s a work in progress and I’d like to give you a tour of the process. Our story picks up in Granada, Spain. 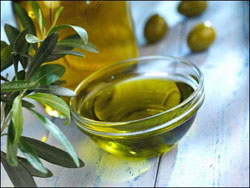 Drs. Javier Menendez and Antonio Segura-Carretero just published a study in the journal, BMC Cancer. Their research showed that extra virgin olive oil could suppress the activity of a certain type of breast cancer cell.

Before we get to the heart of the matter, let’s examine exactly what extra virgin olive oil (EVOO) is. EVOO is made from the first pressing of the olive fruit. It is not purified or stripped of any of its healthful components, which is the case with other olive oils. Therefore, EVOO is widely regarded as the healthiest and most natural form of olive oil.

What this tells us is that a) the natural extracts of olive oil successfully fought the breast cancer cells and b) when drug-like chemicals, derived from olives, were tested … they failed to produce positive results.

In this instance nature was shown to be more effective than conventional medicine. But at this time, the modern medical establishment doesn’t allow foods to be used as therapies for major illnesses such as cancer. So, we often end up getting chemical versions of natural substances. Sometimes they’re improvements over what nature first provided. Often times they’re not.

Perhaps a time will come when the best remedies can be prescribed regardless of their origin. Until then, I believe the wisest approach is for all of us to stay well in the first place. And we can help improve our odds of doing so by utilizing the many gifts that nature provides.

Tip of the Day: You can incorporate more EVOO into your diet by making your own salad dressing and marinades at home. You can also use EVOO for low temperature cooking (preferably less than 300F degrees). Or go one step further and simply eat whole olives. They’re delicious and are even less refined than EVOO!


2 Comments & Updates to “The Secret Life of Olive Oil”