Anniversaries are occasions to celebrate and reflect upon special times in our lives, typically relationships, weddings or work related milestones. But these occasions also occur in the field of medicine. In 1999, research began appearing in medical journals on a culinary substance known as red yeast rice (RYR), a richly pigmented paste or powder that is commonly used to add color to Chinese and East Asian foods. It has also been used in the traditional practice of Chinese medicine for over 1,000 years to support healthy digestion and proper circulation. The reason for the modern Western interest in RYR has to do with its similarity to a relatively new class of cholesterol lowering drugs known as “statins”. 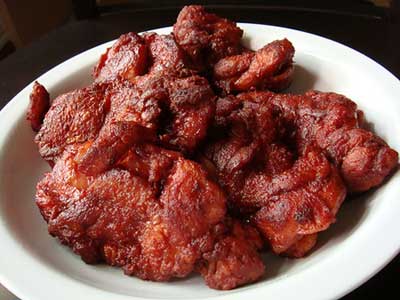 Red yeast rice contains a group of chemicals called monacolins. Monacolin K is chemically identical to lovastatin, which is sold as a prescription medication (Mevacor). The difference between Mevacor and RYR is that RYR also contains many other natural substances such as fatty acids, antioxidant-rich pigments and tannins, phytochemicals and trace minerals. (1,2) Because of the chemically diverse makeup of RYR, there was hope that it would provide an effective and safer alternative to the more expensive and controversial statins. What’s been learned in the last decade helps to clarify the promise and reality of this nutritional supplement.

The most recent inquiry into the cardiovascular effects of red yeast rice appear in the June edition of the journal Annals of Internal Medicine. In that trial, 62 volunteers with high cholesterol split into two groups. One group received a total of 3,600 mg of RYR (1,800 mg twice daily) and the remainder of the participants were given identical looking placebos. All of the volunteers also engaged in a “12-week therapeutic lifestyle change program”. Blood tests were performed pre, during and post study to test the efficacy and safety of RYR versus a benign placebo. Here’s what the researchers discovered:

The authors of the study concluded that, “Red yeast rice and therapeutic lifestyle change decrease LDL cholesterol level without increasing CPK or pain levels and may be a treatment option for dyslipidemic patients who cannot tolerate statin therapy.” CPK is a marker that indicates muscle damage (myalgia), a potential side effect of statin therapy. (3)

Previous studies utilizing RYR have demonstrated even more impressive reductions in LDL and total cholesterol, inflammatory markers and triglycerides. (4,5,6,7,8) However, the results have been rather erratic. This may be due to differences in how manufacturers grow RYR. The basic process involves inoculating rice with a specific mold, usually Monascus purpureus. But due to quality and safety concerns, other molds may also be employed, such as Monascus pilosus. (9,10)

The issue of safety is a very real consideration for those considering red yeast rice. As I mentioned, the similarity to Mevacor, the statin medication, immediately sends off alarms for some medical authorities. There is preliminary evidence that these concerns are justified. No widespread side effects have yet been documented, but some case reports hint at the possibility that RYR may not be appropriate for people with compromised liver function, previous indications of myopathy (muscle damage) and other health vulnerabilities. (11,12,13)

Some of the potential danger may be offset by supplementing simultaneously with the antioxidant CoQ10. Statin medications (including RYR) seem to interfere with the body’s ability to produce CoQ10. (14) This is a very important observation because CoQ10 appears to play a valuable role in promoting cardiovascular health. In addition, CoQ10 is present in all of the tissues that can be adversely affected by statin therapy, such as the heart, liver and muscular system. If that’s not reason enough to recommend CoQ10 while using statins, it’s been recently suggested that their combined use may provide a synergistic antioxidant effect in the heart and throughout the body. (15) This theory is supported by a new study in the journal Diabetes Care that found that adding CoQ10 in statin-treated patients improved endothelial function. (16)

On the positive side of the safety issue, there was a trial published in 2008 that followed almost 5,000 people for an average of 4.5. years. In that research, a 45% reduced risk of heart attack and death was found in the participants using RYR. Total mortality (from all forms of death) was also 33% lower in the RYR group. Furthermore, the group that consumed RYR daily experienced reductions in LDL cholesterol and triglycerides, and a 33% decrease in the need for heart-related surgery. That particular investigation also found an improvement in HDL (“good”) cholesterol. (17,18)

If you decide to try RYR, please do so with the cooperation of your cardiologist or primary physician. It’s important to look out for any possible signs of adverse reactions such as digestive disturbances, liver abnormalities, memory problems and muscle pain. I would also seriously consider the use of CoQ10 while taking RYR or any statin. Because of a general lack of consistency in commercially available products, please ask plenty of questions before choosing a product. Then, make sure to have periodic blood tests to determine whether said product is working safely for you. Don’t take any unnecessary chances with your health.

Finally, if you’d prefer to use a different natural remedy to manage your cholesterol levels, consider flax seeds. A meta-analysis in the June issue of the American Journal of Clinical Nutrition reviewed 28 studies over the past two decades and determined that flax lignans and seeds could significantly reduce LDL, total cholesterol and improve insulin sensitivity. The effects were more pronounced in postmenopausal women, but other studies have found benefits for both sexes. (19,20,21)