The consistent, rhythmic beating of the heart is something most of us take for granted. This is not a criticism or judgement. It makes perfect sense that we expect our hearts to keep pumping blood in much the same way as we predict our lungs will help us breathe day in and day out. Likewise, hair and nails grow without any consideration. Even muscles move without any meaningful cognitive incentive. It’s the body’s job to function in a predictable manner and it usually does. That is, until it doesn’t. Atrial fibrillation is just such an example, where the heart decides to occasionally beat to the rhythm of a different drummer. 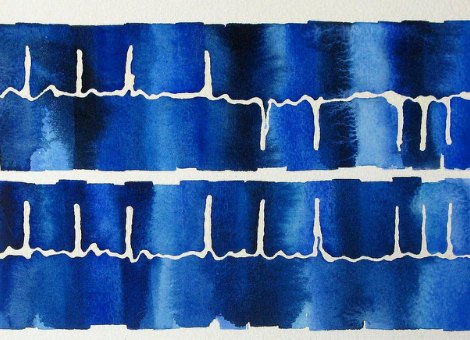 A primary function of muscles, of which the heart is one, is to contract and relax appropriately. In the case of atrial fibrillation (AFib), the top chambers of the heart sometimes behave in an irregular manner. The consequence of this sporadic abnormality is a pooling of blood that is supposed to flow freely. When blood collects and/or circulation slows down, the likelihood of clotting increases. Excess clotting is associated with heart attack and stroke risk. For this reason, many cardiologists prescribe “blood thinners” and medications that affect heart rate, such as beta- and calcium channel blockers. In some instances, addressing potential causes of AFib, including hyperthyroidism, is part of the current standard of care as well.

In addition to the conventional options mentioned above, several AFib alternatives and complementary strategies have emerged in the medical literature. For instance, in previous columns, I’ve documented the potential of acupuncture and high intensity interval training as possible adjuncts to improve treatment outcomes. But, please note that AFib is a serious condition which requires serious management or treatment – whether conventional, integrative or natural. Do not take AFib lightly. Be informed. Be proactive. Find the best treatment program for you.

Step 2: Eat Mediterranean-Style – A recent study in the journal Europace found that consuming a Mediterranean diet does not pose a threat to those taking a common form of blood thinning medication known as Vitamin K antagonists. This is great news because there is a considerable amount of research indicating that a Mediterranean-style diet, rich in fruits, magnesium, nuts, olive oil and vegetables, addresses many risk factors linked to AFib, such as excessive blood clotting, oxidative stress and magnesium deficiency.

Step 3: Practice Yoga – The scientific literature is flooded with articles demonstrating the cardioprotective effects of yoga in healthy and high risk individuals. And, over the past few years, new research has specifically established a role for yoga in the holistic management of AFib. Best of all, yoga supports a healthy cardiovascular system in multiple ways including: a) positively modulating heart rhythm and rate aka parasympathetic and sympathetic activity; b) lowering blood pressure; and c) reducing psychological stress and associated mood considerations such as anxiety and depression.

Step 4: CoQ10 Supplementation – A brand new study in the Journal of Investigative Medicine discovered that coenzyme Q10, an antioxidant supplement long used in integrative cardiology, may powerfully complement standard care for AFib. In this particular research, patients receiving CoQ10 were over 3.5 times less likely to have an AFib episode over the course of a 12 month monitoring period compared to a placebo. Additionally, CoQ10 has been shown to enhance the benefits of a traditional Mediterranean diet by promoting DNA repair.

Step 5: Putting It All Together – If you’re overweight, adopt a health promoting weight loss strategy. Incorporating foods and ingredients common to the Mediterranean diet appears wise. Consider supplementing with CoQ10, taken with meals, for even greater protection. Add in a little or lot of yoga to the mix. If you don’t need to lose weight, you can still adopt these very same practices in a slightly modified form – fewer caloric or dietary restrictions. But, keep an eye on your weight as time goes on. Even minor weight gain can tip the AFib scale out of your favor. Finally, examine other natural remedies such as acupuncture and lemon balm if necessary.

In closing, I want to point out something that many of you may not know. Regularly, I post updates to my older columns in the “Comments & Updates” section at the bottom of each page. If you primarily read my new columns via email, you’re likely missing out on the latest scoops I uncover on my daily data hunt. But, I want you all to get the most of this site. So, be sure to look out for anything new I find that may benefit you and yours. Be well!

Yoga Practice May Reduce the Number of AFib Episodes 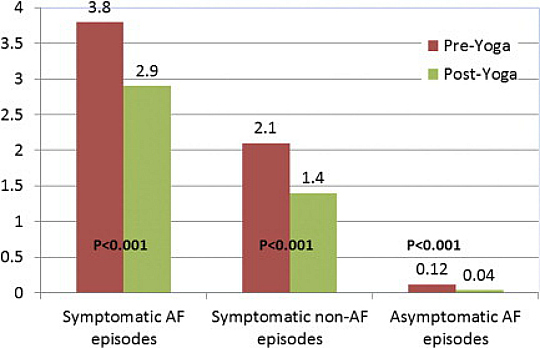