At the moment there is a budget crisis in my home state of California. As a consequence, local politicians are scrambling to find the least objectionable ways to make ends meet without endangering future bids for re-election. I have a suggestion for any elected official who’s genuinely interested in cutting costs and improving the quality of life of their constituents: Start by changing your diet and lifestyle and then help others to do the same. 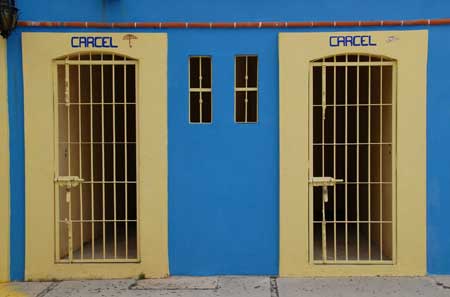 Two of the biggest causes of budgetary woes are health care spending and costs associated with incarcerating criminals. Large scale changes in diet and supplementation would almost certainly reduce expenditures needed to deal with both of these pressing issues. I’ll step right up to the plate and tell you that I believe that specific changes in what people eat and how they take care of themselves would reduce crime, hospital visits, prescription medication use and improve virtually every aspect of life that is meaningful to the human experience. I mean that literally. Change your lifestyle and you will likely find a dramatic improvement in almost every department of your life.

A study presented in the February edition of the journal Aggressive Behavior reports that supplements can help reduce violent acts in young adult prisoners. 221 criminal offenders were provided with either a placebo or a combination of essential fatty acids (omega-3s and omega-6s), minerals and vitamins over the course of 1-3 months. The prisoners who received the nutritional supplements demonstrated a 34% reduction in violent episodes. Those given the placebo exhibited a 14% increase in aggressive incidents. Another trial involving over 1,000 British prisoners is currently underway. The 3 year study is sponsored by the U.K.’s Welcome Trust and budgeted at over $2.3 million. The testing will include “blood chemistry analysis and a battery of computer-based behavioral and cognitive tests”, and should provide the clearest evidence yet about the role that diet and supplementation have in augmenting antisocial choices. (1,2)

A previous examination from 2002 found that similar supplementation brought about a 35% decline in disciplinary offenses. In addition, a trial published in the February 2000 issue of the Journal of Alternative and Complementary Medicine reported that “low dose vitamin-mineral tablets” prompted a 47% lower rate of antisocial behavior in a sampling of 468 schoolchildren. The placebo controlled study revealed several key areas in which the supplemented students differed from those receiving placebos: acts of disrespect, defiance, disorderly conduct, endangering others, fighting, obscenity use, refusal to do school work and vandalism. The authors of the latter study concluded that, “Poor nutritional habits in children that lead to low concentrations of water-soluble vitamins in blood, impair brain function and subsequently cause violence and other serious antisocial behavior. Correction of nutrient intake, either through a well-balanced diet or low-dose vitamin-mineral supplementation, corrects the low concentrations of vitamins in blood, improves brain function and subsequently lowers institutional violence and antisocial behavior by almost half”. (3,4)

Diet and Lifestyle Choices May Impact the Likelihood of Being Bullied

Supplements are only one part of the picture when it comes to revolutionizing individual and societal health. The most significant dietary change communities can collectively make is to lower the intake of processed foods and sugar. I know you’ve probably read this type of suggestion quite often. However science truly does support a link between junk food consumption and destructive behavior. The scope of the damage extends even beyond how our actions affect others. The way we treat ourselves also impacts the way others react to us.

I don’t believe that a healthy diet and lifestyle alone will convert this world into a utopia. Nor am I claiming that all prisoners will transform into law abiding, peaceful, pillars of society if they’d only have the right foods and supplements at their disposal. What I am proposing is that optimal nutrition and taking proper care of ourselves can change the way we feel and perceive the world. This can make an enormous difference in the decisions we make and paths we choose in life. The change that I’d like to see can happen on a case by case basis. It’ll require the assistance of community leaders, concerned individuals, parents, politicians and even prison guards. Start by setting an example for what you’d like to see in others. Be someone that your colleagues, family, friends and neighbors will want to emulate. Then take it one step further and spread the word. One day you may find that even the most unlikely of sources, such as big-wig politicians, may be ready to hear your message. If nothing else, the idea of saving money and their jobs could bring about a whole host of side benefits for us all.


17 Comments & Updates to “Crime and Nutrition”